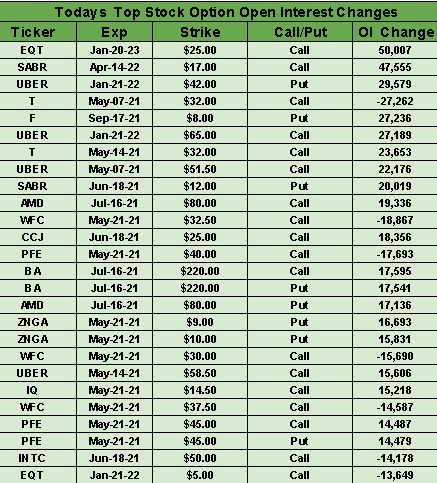 Stocks of COVID-19 vaccine developers are trending lower after U.S. Trade Representative Katherine Tai announced support for a waiver of intellectual property protections. "We are for the waiver at the WTO, we are for what the proponents of the waiver are trying to accomplish, which is better access, more manufacturing capability, more shots in arms,” she said during an interview. Pfizer (PFE) is off 3.1% premarket on the news, BioNTech (BNTX) declined 4.3% (following a 3.4% drop in the previous session), while Moderna (MRNA) fell another 2.4% (after tumbling 6.2% on Wednesday).

Bigger picture: At the World Trade Organization, the Biden administration will engage in negotiations for the text of the waiver and push for support from other countries. Regarding the timeline of an outcome, "I am the first one to admit that what we are leaning into is a process that is not going to be easy," Tai noted, saying the WTO is a member-driven organization that takes decisions based on consensus. The U.S. Chamber of Commerce is opposing the decision, along with others in the business community, stating, "it will take us off track in the ongoing and successful efforts to license and scale global production of vaccines that individuals can be confident are safe and effective." We mentioned both sides of the argument earlier this week, but they are included again below for reference.

The case against an IP suspension: A number of large pharma companies, including vaccine developers Pfizer (NYSE:PFE), Johnson & Johnson (NYSE:JNJ) and AstraZeneca (NASDAQ:AZN), say waiving IP rights wouldn't solve supply problems in the short term because contract producers lack familiarity with the new technology behind the shots (which isn't shielded by patents). Obstacles to scaling up production also include the need to train technicians, source scarce ingredients and sensitive biological components. Quality checks are another concern, with a limited number of manufacturers capable of large-scale vaccine production.

The case for a suspension: Proponents of the waiver proposal say there are more than a dozen drugmakers in developing countries that could be equipped to produce the shots and have passed quality checks by the WHO and the FDA. It would allow the nations to make their own copies of the vaccines without fear of being sued for IP infringements. The U.S. government owns patents related to the vaccines because some of the technology behind the shots were developed at American government labs.

States and cities are now targeting Americans who might be reluctant to get a coronavirus vaccine as demand for the jabs slows across the nation. The U.S. is now averaging about 2.3M shots per day, which is down 32% from the peak last month, according to the CDC. Some public health experts are even concerned that the decline may jeopardize the ability for the U.S. to reach "herd immunity," leading many localities to increase incentives for residents that take the jab.

On the table: Maryland is offering $100 to state employees that get fully vaccinated, Detroit is giving out $50 prepaid debit cards to anyone who drives a resident to a vaccine site, and in New Jersey, anyone over the age of 21 can take their vaccination card to a participating brewery for a free beer. Connecticut has a similar program, in which residents who have received at least one vaccine dose can get a free beverage at participating restaurants in the state.

That's not all. Looking to boost West Virginia's vaccination drive, Gov. Jim Justice announced last week that the state would give $100 savings bonds to 16- to 35-year-olds who get a vaccine. Harris County, the Texas county that houses Houston, also just approved $250,000 to be used for gift cards and events, though some are saying the incentives do not put the U.S. in a positive light compared to the rest of the world. "When people are clamoring for vaccines in India and in Brazil, it just makes us look like a nation of sulky adolescents," said Dr. Peter Hotez, dean for the National School of Tropical Medicine at the Baylor College of Medicine. "So if it's absolutely necessary, sure, although it's tough to swallow."

Private businesses are also involved: Krispy Kreme is giving away free doughnuts to anyone who presents a vaccination certificate, while Budweiser (NYSE:BUD) is offering a debit card that can be redeemed for a free beer. There's even a marijuana dispensary in Michigan, called Greenhouse of Walled Lake, that has been giving out free joints to vaccinated individuals, and recently extended the "pot for shots" program until the end of May.

Where do we go from here?

U.S. stock index futures inched up overnight, but not by much, as traders await the latest weekly update on the number of Americans applying for jobless benefits. A report from the Labor Department will likely show initial claims fell to 540,000, from 553,000 in the previous week, suggesting the numbers are still trending downward. It would also mark a fresh pandemic low given the pick-up in economic activity.

Snapshot: Unemployment is still a problem. More than 16.5M Americans were receiving jobless benefits as of mid-April, including more than 12M Americans on the federal Pandemic Unemployment Assistance and Pandemic Emergency Unemployment Compensation programs. Last month's non-farm payrolls report also showed the U.S. economy is more than 8M jobs short of its pre-pandemic levels, but a fresh NFP figure will be published tomorrow.

On the earnings calendar, investors will get Q1 results this morning from Moderna (MRNA), Regeneron (REGN), Kellogg (K) and ViacomCBS (VIAC). After the bell, reports will be released by AMC (AMC), Dropbox (DBX), Expedia (EXPE), Square (SQ), Roku (ROKU), Beyond Meat (BYND) and Shake Shack (SHAK). Traders are also looking for signs that crypto craze may be cooling - Dogecoin (DOGE-USD) fell 12% overnight to $0.60 - though tokens elsewhere may be benefiting from the decline, like Bitcoin (BTC-USD), which rebounded 4% to the $57,000 level.

Other happenings: Many are paying attention to the divergence between value and growth stocks, with the Dow notching another record on Wednesday and Cathie Wood's ARK Innovation ETF (ARKK) off almost 30% from its peak seen in February. "High valuations don't do well when you see better GDP growth, a little bit more inflation," said Stephanie Link, chief investment strategist at Hightower, while CNBC's Jim Cramer recommended to resist the urge to sell following the recent tech selloff. "They're currently out of favor in the Wall Street fashion show. I'm telling you it's temporary. You have to resist the urge to believe that 'FAANG' is finished and dump it on the obituary chatter."

Risks of rising prices are intensifying across the economy as a growing number of companies warn that supply shortages and logjams will compel them to raise prices. In fact, tight inventories have seen prices surge for raw materials, ranging from semiconductors and steel to lumber (LB1:COM) and cotton (CT1:COM). Manufacturers are scrambling to replenish stockpiles to keep up with accelerating demand as eager shoppers take out their stimulus-filled wallets following a broad vaccine rollout.

Thought bubble: As commodities and materials become more expensive, the bigger question at the table is whether faster inflation sticks around. Putting it in perspective, a sheet of 3/4" plywood at Home Depot (HD) is now selling for around $60 (depends on location), up from about $30 before the pandemic - that's a 100% increase. Investors and policymakers alike are hoping that the price hikes prove transitory, though it's still too early to predict the future, and Treasury Secretary Janet Yellen even made waves this week by suggesting tools that could combat an overheating economy.

"Straight price increases will continue to be an important element as we look at the back half of the year," Colgate-Palmolive (CL) CEO Noel Wallace told investors after the company's Q1 results. "I anticipate that you'll see more price increases across the sector, given the headwinds that everyone has faced in this space." Many other companies have also warned of price increases and supply chain disruptions on their earnings calls, including Apple (AAPL), Coca-Cola (KO), Proctor & Gamble (PG) and Kimberly-Clark (KMB).

The economic angle: Longer lead times and orders booked far in advance could result in a robust demand floor that could encourage companies to invest in ramping up production and capacity. That would be great for economies coming out of the pandemic, but the opposite could also happen, in which volatility and uncertainty destroy demand as prices become too high for consumers. The phenomenon, called the "bullwhip effect," could end up damaging the economy in the short-term, with violent swings in a range of goods.

Marking the most momentous decision of the body's short existence, Facebook's (NASDAQ:FB) Oversight Board has decided not to permit former President Donald Trump back on the social media network. However, the group did ding the company for inconsistent application of its rules and directed that it revisit and clarify the nature of the ban.

Backdrop: Facebook created the Oversight Board to insulate itself somewhat from what were becoming thorny decisions about content regulation on a network of billions of individuals and groups - and during a time when the president's controversial posts became one of the most significant social issues of the Internet era. In what became an indefinite suspension, Facebook stopped Trump from posting to 35M followers after the storming of the US Capitol on Jan. 6, the day Congress counted electoral votes for the presidency. That came alongside bans of Trump on Twitter (TWTR), YouTube (GOOG, GOOGL), Snapchat (SNAP), Twitch (AMZN) and other platforms.

"Trump’s posts during the Capitol riot severely violated Facebook’s rules and encouraged and legitimized violence," according to the Oversight Board. "The Board also found Facebook violated its own rules by imposing a suspension that was ‘indefinite.’" Within six months, the company must review the matter and "decide a new penalty that reflects its rules, the severity of the violation, and prospect of future harm."

Go deeper: The latest decision doesn't just have political implications for Facebook; reinstating Trump would have provided a tough-to-match engagement boost. For his part, Trump has frequently criticized social media companies' power, saying they suppress conservative views. He has also denied claims he incited people to engage in destructive behavior at the Capitol and previously sought to revoke Section 230 of the Communications Decency Act during his time in office.

Peloton (NASDAQ:PTON) stumbles after agreeing to a treadmill recall.