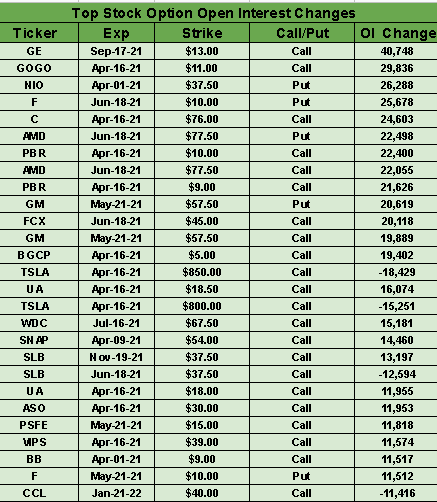 Eyes on a rare payrolls day

The tech stock rally looks to keep going with Nasdaq futures solidly higher at the open, but the broader market is more cautions, with S&P futures up slightly and an unusual jobs report set for tomorrow.

The Department of Labor will release its March jobs report tomorrow, Good Friday. It is a market holiday but not a federal holiday, and it's rare that the big payrolls figure lands on a Good Friday.

Ahead of the number: Weekly initial jobless claims will be released at 8:30 AM ET today, with economists looking for a slight dip to 680K from 684K the week before. Continuing claims are forecast to drop to 3.775M. It's those continuing claims, which demonstrate the trend in the labor market, that will have more bearing on tomorrow's payrolls report, where the survey comes in the first half of the month.

Private jobs bounce: Yesterday ADP reported its measure of private-sector employment, which showed a rise of 517K, about in line with estimates. The service sector added 437K jobs and "significantly outpaced its monthly average," ADP said, while the manufacturing sector added 80K jobs. The ADP report tends to have a bad correlation with the official government figures, though, and Wall Street is looking for bigger gains tomorrow.

1 million jobs added? The consensus is for nonfarm payrolls to have risen by 647K last month, which would be the biggest gain since September 2020. The unemployment rate is seen falling to 6% from 6.2%. But there's some big variation in what the big banks are calling for.

"We look for nonfarm payrolls to increase by 1 million in March, pushing the unemployment rate down to 5.9%," Merrill Lynch says. Morgan Stanley is looking for a net payrolls gain of 700K, but also predicts that the jobless rate will fall to 5.9%. JPMorgan Chase is close to the average prediction at 650K.

Diane Swonk, chief economist at Grant Thornton, is also predicting a bullish gain of 1M jobs, which would be the highest since last August when the summer rebound was still strong.

"Private sector payrolls are expected to rise by 850,000 while gains mostly at the state and local levels make up the remaining 150,000 of those increases," Swonk writes in a blog. "Employment gains in restaurants, bars and accommodation are expected to account for more than half of overall job gains. Hiring in health care is also expected to post outsize gains."

"In fact, one of the ironies of the pandemic was the blow to health care employment," she adds. "We were still down more than a half million jobs in the health care sector in February compared to the year prior. Cuts at the onset of the crisis were particularly large because smaller offices were forced to close for lockdowns almost entirely. Hospitals were forced to put more profitable elective surgeries on hold as people with non-COVID conditions shied away."

The broader market and cyclicals outperformed tech shares in Q1, while bond prices sank and deals had their biggest quarterly performance in 20 years.

The S&P (SP500, SPY) is up 5.8% year to date, outpacing the Nasdaq (COMP, QQQ), which rose 2.8%. The Dow (DJI, DIA), with its cyclical tilt to financials and industrials and its price-weighted calculation, rose 7.8% through the first three months.

"Given the carnage we saw in some areas of the market recently, it may not seem that way but March was a very positive month for US equities across different styles and sectors," Bespoke Investment Group writes in a note. "At the index level, the Dow led the way surging nearly 7%, but the S&P 500 was also very strong, gaining more than 4.5%. Large Cap Tech was an area of relative weakness, but even the Nasdaq 100 was up 1.71% (just about all of which came on the last trading day of the month)."

"Continuing a trend that has been in place all year, value stocks left growth in the dust, more than doubling the gains of growth stocks during March," Bespoke adds.

In its review of Q1, DataTrek Research says the outsize moves seen in volatility in previous years are returning to normal at a fairly brisk pace. "Lots of liquidity into the US economy and financial system has helped corporate earnings rebound and valuations stabilize quickly," DataTrek's Jessica Rabe writes. "That, along with a solution to the crisis issue (i.e. vaccines) and lower equity sector correlations, have dampened volatility faster than prior post-crisis periods."

Yields take off: One of the big weights on technology and other high-valuation stocks has been the rise in U.S. Treasury yields (TBT, TLT). Treasury prices sank the most since 1980, when the fed funds rate surged in an attempt to curb inflation. The Bloomberg Barclays U.S. Treasury Index is off 4.25% over the past three months. Inflation expectations are a big reason for the rise in yields, with the 10-year breakeven rate approaching 2.4, levels not since in nearly eight years.

M&A booms: Mergers and acquisition enjoyed their best performance in two decades in Q1 at $1.1T. A big boon to that activity is SPACs putting money raised to use. The amount reported of public companies buying private companies rose to $435B in Q1, up 86% from the year-ago period, according to a Bloomberg estimate. North America led dealmaking with $644B, followed by Europe at $286B and Asia Pacific at $261B.

SPACs set to take off in Asia

With Asia in third place in regional M&A, a jumpstart of SPAC activity could lead to more deals in the area.

A flurry of investment is set to bring the red-hot trend of "blank-check" entities going public in order to find a private merger partner to Asia, where it's played a small part so far. The region's merger/acquisition activity is heating up, and one banker notes the only issue may be running out of merger candidates with so many SPACs coming on board to invest. (2 comments)

Japan’s Kioxia in the deal crosshairs

Also in the M&A space, Micron (NASDAQ:MU) and Western Digital (NASDAQ:WDC) are reportedly considering making separate bids for Japanese chip maker Kioxia Holdings that could value the company at $30B. A deal could be finalized this spring, though it's not guaranteed, according to a WSJ report. (33 comments)

In more news on chips, Taiwan Semiconductor (NYSE:TSM) says it plans to spend $100B over the next three years to expand its chip fabrication capacity. TSMC, whose customers include Apple and Qualcomm, already had indicated plans to spend $25B-$28B this year to develop and produce advanced chips. (10 comments)

Apple (NASDAQ:AAPL) says it will build a "grid scale" battery-based renewable energy storage facility in California near a solar farm that already provides daytime energy needs for its headquarters in Cupertino. The project will store 240 MWh of energy, or enough to power more than 7K homes for one day. (55 comments)

XPeng (NYSE:XPEV) delivered a total of 5,102 Smart EVs in March 2021, an increase of 384% year over year.
NIO (NYSE:NIO) delivered 20,060 vehicles in Q1 2021, +423% Y/Y, topping forecasts.
These ETFs will be affected by the White House infrastructure plan.
Social media in focus as Fox News says former President Trump is "moving forward" on plans to start his own platform.
NBCUniversal (NASDAQ:CMCSA) is considering pulling its Universal Studios movies from other streaming services, notably Netflix (NASDAQ:NFLX) and HBO Max and preserving the titles for its Peacock service.
The FAA says it approved the design for the Boeing (NYSE:BA) 737-8200, part of the 37 MAX series, a necessary step before the company can begin delivering the planes to Ryanair.