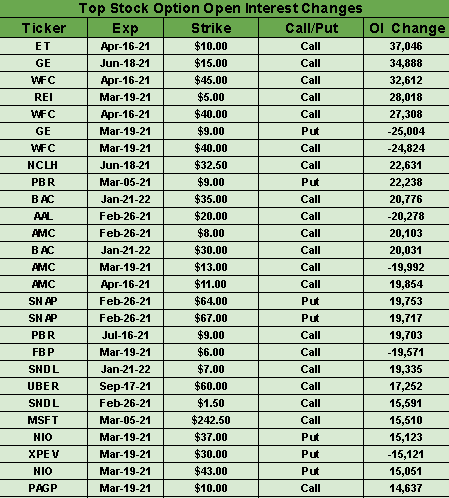 It was the catalyst the WSB/Reddit crowd had been waiting for... GameStop (NYSE:GME) announced Wednesday that its chief financial officer Jim Bell would resign on March 26. Several sources indicating that the board pushed him out to execute its turnaround more quickly, but an outsized reaction ensued amid a sudden burst of activity. Shares surged more than 104% following two afternoon halts, and even rose another 83% in AH trading to $168.13, before paring some gains to $130.58 in today's premarket session.

When all was said and done, more than 82M GameStop shares traded hands on Wednesday, the highest level since January 27. Derivatives trading also seemed to exacerbate the move in GameStop, according to Susquehanna's Christopher Jacobson, with some 262,000 call options contracts trading hands. Looking back, another management change prompted all the activity back in January. The appointment of Ryan Cohen (co-founder of Chewy) to the GameStop board helped drive shares heavily upward and eventually resulted in the epic short squeeze that saw retail traders inflict severe losses on hedge funds. The stock still has significant short interest at nearly 42%.

Note: The new advance came after Barstool Sports founder Dave Portnoy faced off with Robinhood's (RBNHD) Vlad Tenev over the GameStop saga. Reddit also went down after GameStop shot up, sparking a range of theories. While subreddit r/WallStreetBets, which has championed the stock, seemed to be getting a lot of heavy traffic right before the crash, it's unclear if the two were related. Last week, GameStop bull Keith Gill, also known as Roaring Kitty, shared a screenshot showing he had doubled his long position to 100K shares.

Another market record for 2021 was seen Wednesday as the Dow Jones Industrial Average surged 424 points to a new record close. Rotation players were also happy to see the index as the only major average in the green this morning, with contracts linked to the benchmark up 0.2%. While the S&P 500 and the Nasdaq also climbed 1% yesterday, futures trading shows them down 0.2% and 0.6%, respectively. Treasury yields climbed another 6 bps to 1.45%, while oil prices extended gains for a fourth session to reach the highest levels in more than 13 months.

Doubling down: As he did before the Senate Banking Committee, Jay Powell further told the House Financial Services Committee that the Fed is in no rush to raise interest rates or begin trimming its $120B in monthly bond purchases (about 7% of GDP on an annualized basis). He also doesn't see any indication inflation could race out of control. While prices might pick up in the coming months, Powell said those increases are expected to be temporary given supply chain constraints.

Meanwhile, President Biden's $1.9T coronavirus relief plan is gaining traction. CEOs from more than 160 companies have voiced support for the aid package, including Goldman Sachs's (GS) David Solomon, Google's (GOOG, GOOGL) Sundar Pichai and Intel's (INTC) Pat Gelsinger. "Congress should act swiftly and on a bipartisan basis to authorize a stimulus and relief package along the lines of the Biden-Harris administration’s proposed American Rescue Plan," they said in a letter to Congressional leaders.

Go deeper: It's also busy day on the economic front. Initial jobless claims numbers will be released at 8:30 a.m. ET, along with the second estimate for fourth-quarter GDP. Traders will additionally be watching earnings from companies like Best Buy (BBY), Papa John's (PZZA), Salesforce (CRM), Etsy (ETSY) and Beyond Meat (BYND). Newly public companies Airbnb (ABNB) and DoorDash (DASH) are also set to report results after the closing bell.

President Biden has signed a fresh executive order mandating a 100-day review of critical product supply chains in the U.S., focused on semiconductors, key minerals and materials, active pharmaceutical ingredients and advanced batteries like the ones used in electric vehicles. "There is strong bipartisan support for fast reviews of these four areas because they're essential for protecting and strengthening American competitiveness," he told a press conference. The order will also initiate a long-term review, to be completed within one year, that takes a look into fortifying six industry-specific sectors including defense, public health and biological preparedness, communications technology, transportation, energy and food production.

Backdrop: The order is part of the administration's effort to secure domestic supply chains in the wake of the COVID-19 pandemic that highlighted several vulnerabilities. The U.S. struggled to get the personal protective equipment needed for health care workers early on in the pandemic, relying on China and other nations for the critical supplies. There has also been an ongoing shortage of semiconductor chips (especially for automobiles), while reports suggest China is exploring whether it can hurt U.S. defense contractors by limiting the export of rare earths.

Response from Beijing: Chinese Foreign Ministry spokesman Zhao Lijian said the measures would "not help solve domestic problems" and only harm global trade. "China believes that artificial efforts to shift these chains and to decouple is not realistic. We hope the U.S. will earnestly respect market laws and free trade rules and uphold the safety and reliability and stability of global supply chains."

While the order doesn't directly call out China or any specific country, White House officials have said an overreliance on Beijing for critical goods was a key risk. The Biden administration may also work with a "carrot and stick" approach, meaning financial incentives for companies that manufacture items domestically or limiting some imports for those who don't. In a letter to Biden, Sens. Marco Rubio (R., Fla.) and Chris Coons (D., Del.) recommended he invoke the Defense Production Act to "incentivize or, if necessary, require American companies to retain their domestic capacities during this time."

The FCC has announced the winners of a wireless airwave auction it conducted over the past few months which racked up a record $81B in bids. The mid-band spectrum, sometimes called the "Goldilocks band," is well-suited for 5G networks because it is able to transmit large amounts of data on a wavelength that can travel long distances. The 280-megahertz spectrum is also especially important to wireless giants who have been trying to fill out their spectrum portfolios.

The big winners? Verizon (NYSE:VZ) - via its Cellco Partnership subsidiary - bid nearly $45.5B on the airwaves. AT&T (NYSE:T) - through AT&T Spectrum Frontiers - bid $23.4B, while T-Mobile (NASDAQ:TMUS) bid $9.3B (it already acquired some mid-band through its merger with Sprint). The results were in line with industry expectations and reflect how important securing licenses for the airwaves is for the carriers.

"These record-breaking results highlight the demand and critical need for more licensed mid-band spectrum and demonstrate the importance of developing a robust spectrum auction pipeline," said Meredith Baker, CEO of CTIA (a trade group that represents the wireless industry). The bidders are still under a quiet period, so they are not permitted to comment publicly.

Outlook: The COVID-19 pandemic has shown just how critical our connectivity is given remote work and remote learning trends that have led to a boom in broadband-powered services. 5G will not only lead to eye-popping speeds, but more people can be on a network simultaneously with less drop-offs. However, performance of 5G remains dependent on the type of spectrum a carrier has available, with mid-band providing a strong combination of fast speeds and broad coverage.

Lucid talk on the valuation for Churchill Capital IV (NYSE:CCIV).

Facebook (NASDAQ:FB) to invest $1B in news industry after Australia row.