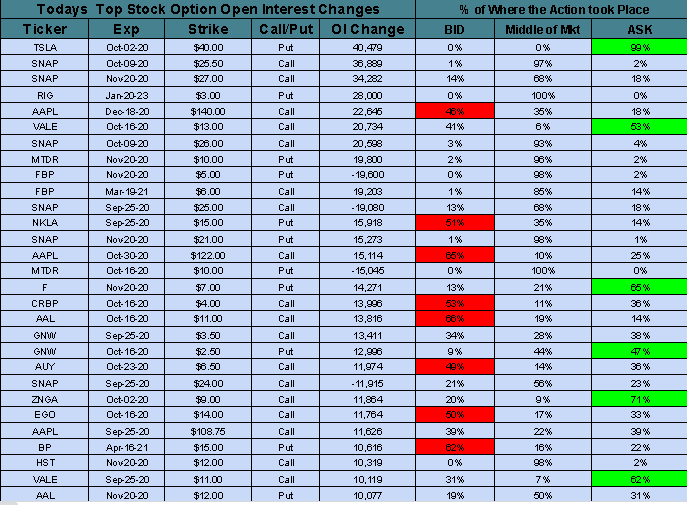 Recent reports have suggested the FDA was considering stricter guidelines for emergency-use authorization of a coronavirus vaccine, though the White House may not approve of them. "It sounds like a political move," President Trump said at a press conference. "When you have Pfizer (NYSE:PFE), Johnson & Johnson (NYSE:JNJ) and Moderna (NASDAQ:MRNA) - these great companies coming up with vaccines - and they have done testing and everything else, why would the the FDA have to add great length to the process?" "Decisions to authorize or approve any such vaccine or therapeutic will be made by the dedicated career staff at FDA... and science will guide our decisions," Dr. Stephen Hahn, the commissioner of the FDA, told the Senate Health Committee on Wednesday.

Market volatility is not going away as Wall Street experienced more whiplash on Wednesday, with stocks closing broadly lower and futures pointing lower overnight. Today, the Labor Department is expected to say the number of jobless claims declined to 840K last week - down 20K from the previous week's tally - and the lowest reading since March 14 (right before the coronavirus lockdowns). That may not be enough for investors, who have largely given up on the idea that Congress will approve a fresh COVID-19 stimulus package.
Go Deeper: Goldman Sachs slashes Q4 U.S. growth forecast in half to 3%.

U.S. high-yield bond issuance for 2020 has eclipsed the prior annual sales record of $329.6B set in 2012, according to data compiled by Bloomberg, as companies reap the benefits of the Fed's liquidity-boosting and zero-interest rate policies. The support has effectively turned the industry into a borrower's market, and all-in yields for U.S. junk bonds have dropped to 5.81%, near pre-pandemic levels. Jitters may be coming... The biggest ETF focused on sub-investment grade debt, the iShares High Yield Corporate Bond (NYSEARCA:HYG), was hit by nearly $1.06B of outflows on Monday, the largest single-day outflow since the start of the coronavirus.

Moving the ball on initiatives the Trump administration outlined this summer, the Justice Department has submitted its take on pulling back longtime legal protections for internet companies. The proposed changes to Section 230 legal immunity would force social media giants including Facebook (FB), Google (GOOG, GOOGL) and Twitter (NYSE:TWTR) to take more responsibility for managing content on their sites. Any legislation is unlikely to move forward during a contentious election season, but it could be taken up next year, as representatives from both parties have indicated a willingness to revisit and update the legal protections.

After inking a deal yesterday with the World Federation of Advertisers on posting statements, Big Tech is stepping up its efforts to tackle disputed content, an effort applauded by some and opposed by others. YouTube (GOOG, GOOGL) is expanding its fact-checking feature for video searches to Europe, displaying information and links from third-party publishers on queries related to issues like elections and the coronavirus pandemic. Meanwhile, Facebook (NASDAQ:FB) will reportedly launch its "Supreme Court"-style oversight board ahead of the U.S. election amid rising criticism for its perceived failure to confront hateful and divisive speech.

Dealing with contradictory statements on who will eventually own TikTok Global, the video-sharing app is also running against the clock. On Wednesday, TikTok filed a preliminary injunction seeking to stop the Commerce Department from banning it from the App Store and Google Play from Sunday. TikTok parent ByteDance (BDNCE) has also applied for an export license from Chinese regulators as it pushes for a deal with Oracle (NYSE:ORCL) and Walmart (NYSE:WMT) to avoid a shutdown in the U.S.

JPMorgan Chase (NYSE:JPM) is poised to pay almost $1B, in what would be a record penalty for an investigation into so-called spoofing of metals futures and Treasury securities, Bloomberg reports. It's also expected that JPMorgan will admit to wrongdoing, an admission many companies generally avoid when settling charges that they violated securities laws. Spoofing usually entails flooding derivatives markets with orders that traders don't intend to execute to deceive others into moving prices in a desired direction.

California Governor Gavin Newsom announced an order to ban gasoline-powered cars in the state by 2035, meaning all new cars sold in the state must be zero-emission vehicles by that time. Major automakers are making such an electrification push that the 15-year timeline may not be too much of a jolt. Seventeen countries including France, the U.K. and Germany have also adopted goals to phase out the internal combustion engine, according to the International Council on Clean Transportation.

Blue Origin (BORGN), the space outfit founded by Jeff Bezos, is planning to make its 13th trip to space this morning (11 a.m. ET) to test technologies for future moon missions as part of NASA's Artemis program. The company will be using its New Shepard rocket that will be flying for the seventh time, setting a record for rocket recycling. SpaceX (SPACE), the commercial space firm headed by Elon Musk, has so far used a single Falcon 9 booster up to six times (a record set last month), though it's worth noting that the Falcon 9 is a different class of rocket used for more technically complicated orbital missions.

Tesla (NASDAQ:TSLA) network goes down along with the stock.