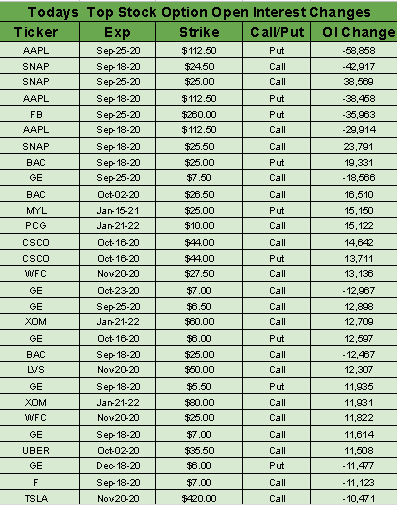 Off their overnight lows, U.S. stock index futures are still down 1% following a session that turned sour yesterday after the big Fed meeting. While the FOMC said interest rates could stay anchored to the zero-bound through 2023 (as the central bank tries to spur inflation), Jerome Powell kept asset purchases at current levels and sounded some alarm bells. "More fiscal support is likely to be needed," he declared, signaling the Fed can't rescue the "highly uncertain" economy alone and Congress needs to act quickly on another coronavirus relief package.

Shares of the cloud computing company doubled in value on Wednesday, giving it a market capitalization of more than $70B, well above the $12B it was valued at in February. Why so much excitement? Snowflake's (NYSE:SNOW) data warehouse, which allows companies to analyze and manage multiple data sources, has massive revenue growth and caught on to the shift towards remote work as a result of the coronavirus pandemic. Concerns? Following yesterday's wild session, Snowflake's Price/Sales ratio approached ~190x on a trailing twelve-month basis, and it is very richly valued compared to other cloud businesses. SNOW -5% premarket to $241/share.

Latest on WeChat and TikTok

An approaching ban on Tencent's (OTCPK:TCEHY) WeChat won't affect people who use the app to communicate, according to the U.S. government, and such users would not be exposed to "criminal or civil liability." President Trump targeted WeChat and TikTok (BDNCE) as purported national security threats back in August and imposed a Sept. 20 deadline for the Commerce Department to draft specific measures for blocking "transactions" with the Chinese owners of the apps. With regards to TikTok, Trump said he doesn't like what he's heard about the terms of Oracle's (NYSE:ORCL) bid, but added that he won't be briefed on the details until later this morning.

Airline industry lobbies for another $25B

Several airline executives are planning to meet White House officials today with only two weeks to go before a ban on industry job cuts is set to expire. Airline CEOs and labor unions want another $25B in federal aid to preserve sector jobs through the end of next March as a recovery in travel demand hasn't yet materialized. The proposal has won bipartisan support in Congress, and while lawmakers and the White House have yet to reach a deal on a new coronavirus package (that could include another round of relief), President Trump is pushing Republicans to back a bigger stimulus bill.

Dire warnings about oil are prompting OPEC+ producers to convene for an online meeting today, where they will review the market and discuss compliance, though further output cuts are not expected. The energy alliance agreed in July to cut production by 7.7M barrels per day from August through to December, while Iraq and others pledged to pump below their quotas in September to offset overproduction earlier in the year. Already this week, OPEC and the IEA, two prominent forecasters, trimmed their 2020 outlook for crude demand, while oil major BP (NYSE:BP) warned that demand may have peaked in 2019.

One of the largest arms deals to Taiwan

Drawing closer to Taipei amid tensions with China, the U.S. is poised to make a $7B arms deal with Taiwan, WSJ reports. The weaponry would include cruise missiles, mines and other hardware, as well as $400M worth of MQ-9B Reaper drones along with related sensors, logistics, ground control stations, training and other equipment. The $7B deal would be on top of the roughly $15B in arms sold to the country during the Trump administration (arms sales to Taiwan totaled roughly $14B over the course of the Obama administration’s eight years in office).

Besides rapidly adding planes to its air fleet, Amazon (NASDAQ:AMZN) is planning to open 1,000 delivery hubs in smaller neighborhoods across the U.S., Bloomberg reports. That will bring last mile delivery closer to customers in the suburbs, while the new hubs will eventually grow to 1,500. It comes as Amazon faces increasing pressure in the one-day delivery space with Target (NYSE:TGT) and Walmart (NYSE:WMT) joining the game, and the latter even launching a Prime competitor.

Breaking up is hard to do

A new filing by LVMH (OTCPK:LVMHF) in the Delaware Chancery Court opposes fast-tracking a ruling that would decide whether the French luxury group had proper legal grounds for torpedoing a takeover of Tiffany & Co. (NYSE:TIF). A judge previously set a Sept. 21 hearing (at Tiffany's request) for an expedited ruling. "If LVMH were confident in its legal position, it would have no reason to oppose an expedited trial schedule," Tiffany Chairman Roger Farah declared, adding that it was another attempt by the would-be buyer to "run out the clock” on the deal, which has a November 24 deadline.
Go Deeper: Luxury sellers could see as much as $100B in sales evaporate in 2020.