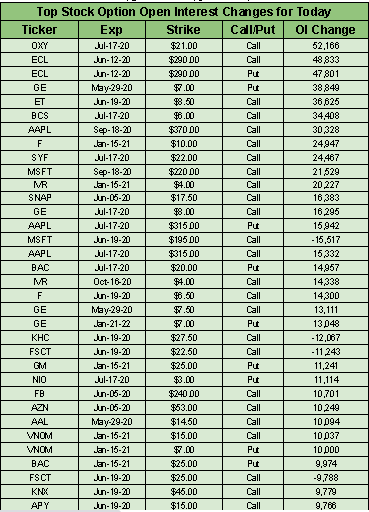 Things are escalating quickly after Twitter (NYSE:TWTR) applied a fact-checking label to President Trump's tweet about the potential for fraud with mail-in ballots. An executive order is now set to be published today that would reportedly open the door for federal officials to punish social media companies - for the way they moderate content - by allowing regulators to rethink Section 230 of the Communications Decency Act. The law largely exempts online platforms from legal liability for the material their users post, and such changes could expose tech companies to more lawsuits. The order would also address political bias on the platforms and review advertising spending on platforms like Twitter, Facebook (NASDAQ:FB), Google (GOOG, GOOGL) and Snap (NYSE:SNAP).
Go deeper: Zuckerberg responds to threats against social media.

Dow and S&P 500 futures are looking to continue the surge seen Wednesday, rising as much as 0.5%, though Nasdaq futures were off slightly on word of an executive order against social media companies. The big overnight action seen over the last couple of days was not present, however, amid the latest tensions with China, the leave-home trade and a gloomy Fed "Beige Book" as U.S. coronavirus deaths climbed past 100,000. On the calendar today is the second estimate of Q1 GDP, weekly jobless claims and durable goods orders, as well as earnings from Salesforce (NYSE:CRM) and Costco (NASDAQ:COST).

'One country, one system'

China's largely rubber-stamp parliament has passed the controversial national security bill for Hong Kong, a move that raises concerns about the territory's future as a financial center. Currently the city is not subjected to the same U.S. tariffs and restrictions as mainland China due to its "high degree of political and legal autonomy." If the bill is enacted, however, it would represent the first time Beijing has introduced a law that imposes criminal penalties into Hong Kong's legal code and bypassed the city's legislature.

Besides possible penalties on Beijing over the Hong Kong security bill, sanctions are already on the way to President Trump's desk as relations between the U.S. and China continue to deteriorate. The House of Representatives approved legislation condemning China for the detention and torture of Uighur Muslims after the bill passed overwhelmingly in the Senate earlier this month. Huawei's chief financial officer, Meng Wanzhou, also lost a major legal battle on Wednesday in her fight against extradition to the U.S. to stand trial on fraud charges.

SpaceX scrubs launch due to weather

Astronauts Bob Behnken and Doug Hurley were only 17 minutes away from launching on SpaceX's (SPACE) Crew Dragon capsule atop a Falcon 9 rocket before the cancellation due to inclement weather. The flight is now rescheduled for 3:22 p.m. on Saturday. Besides becoming the first private company to fly humans into orbit, SpaceX hopes the mission to the ISS could herald an upcoming era of space travel into low-Earth orbit, the moon, Mars and beyond.

Next round of mass layoffs

"We must plan for operating a smaller airline for the foreseeable future," American Airlines (NASDAQ:AAL) told employees, saying it would need to reduce its 17,000 management and support staff by 30%. The carrier will accept volunteers to take buyouts through June 10 and make forced cuts if there aren't enough as CEO Doug Parker dismissed rumors about bankruptcy. United Airlines (NASDAQ:UAL) has also announced plans to cut management ranks by 30% once U.S. government payroll aid expires in the fall.
Go deeper: Boeing to begin laying off 6,700 employees this week.

"Unfortunately because of COVID-19 which has caused an extremely rapid and substantial decrease in travel, Hertz (NYSE:HTZ) has encountered major financial difficulties," billionaire investor Carl Icahn said after offloading his entire 39% stake for a "significant loss." Shares of Hertz (HTZ) tumbled over 20% following the news on Wednesday. "I intend to closely follow the company’s reorganization and I look forward to assessing different opportunities to support Hertz (HTZ) in the future," Icahn added in a statement.

Beating out rivals like Netflix (NASDAQ:NFLX), Apple (NASDAQ:AAPL) has secured a deal for Hollywood veteran Martin Scorsese's next film, Killers of the Flower Moon, which will feature Leonardo DiCaprio and Robert De Niro. The project will be Apple’s biggest foray into film yet after acquiring Greyhound, starring Tom Hanks, last year. Killers of the Flower Moon will be labeled an Apple Original Film and Paramount Pictures (NASDAQ:VIAC) will distribute it theatrically worldwide. Scorsese's last film, The Irishman, was released on Netflix in 2019.

As it works on its own coronavirus vaccine with Sanofi (NASDAQ:SNY), GlaxoSmithKline (NYSE:GSK) said it will expand production of vaccine efficacy boosters, or adjuvants, to produce 1B doses in 2021. It's in talks with governments on backing for the program, which would effectively allow for a scaling up of production of future successful vaccines. Glaxo says its adjuvant can reduce the amount of vaccine protein required per dose, which would allow for more vaccines to be made to combat COVID-19.