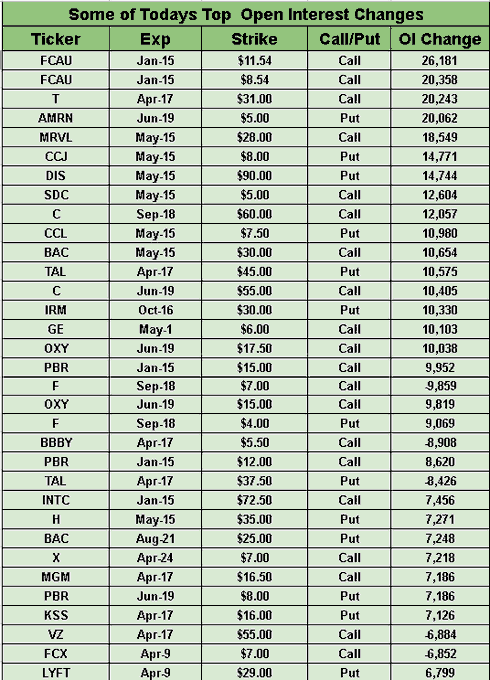 Things are pretty tense in the oil markets ahead of a virtual meeting of the alliance of OPEC and non-OPEC producers today at 4:00 p.m. Vienna time (10 a.m. ET). The spotlight will be on whether Russia, Saudi Arabia and non-participant U.S. will agree to cut crude production amid plunging prices and a lack of storage capacity. "Stalemate is not an option for any of the parties involved," warns Nansen Saleri, CEO of Quantum Reservoir Impact and Saudi Aramco's former head of reservoir management. Even an OPEC+ combined cut of 10M to 15M barrels per day of output won't match the estimated drop in Q2 demand of 16.4M barrels a day. Crude oil is seen swinging to as low as $20 per barrel or as high as $40 per barrel based on how the meeting goes. In today's early action, WTI crude oil futures (CL1:COM) +4.9% to $26.32/bbl and Brent crude +3.8% to $34.08/bbl on indications that the Russians will play ball.

The Department of Labor is due to report jobless claims for the week ending April 4. The report follows on the heels of the last two weeks that saw almost 10M Americans file for unemployment benefits. For this week's report, economists expect on average about 5.2M claims to have been filed, with JPMorgan at the high end with a forecast for 7M filings. There is at least some risk of a blowout shock number due to the increased eligibility through the CARES Act for the self-employed and gig workers to file. While today's jobless claims print could be the peak, Bank of America Merrill Lynch Chief Economist Michelle Meyer warns that the weekly mark could be in the millions for several more weeks.

Global stocks continue to gain on hopes that the pandemic is nearing a peak and that a crude oil output deal will be struck. In Asia, the Shanghai Composite Index rose 0.4%, Hong Kong's Hang Seng Index was up 1.4%, South Korea's Kospi gained 1.6% and Australia's ASX rallied 3.5%. Japan's Nikkei ended flat on the day after a dour appraisal from Bank of Japan Governor Haruhiko Kuroda on the economy. Meanwhile, European stocks are breaking higher, led by Germany's DAX up 1% and U.K.'s FTSE 100 1.6% higher. U.S. stock futures are all pointing to modest gains at the moment.

UBS and Credit Suisse (NYSE:CS) gave in to pressure from Finma, Switzerland's financial market regulator, and elected to split annual dividend payments into two parts this year. Each company had intended to pursue its full dividend plan but endured criticism for doing so amid the viral pandemic. Now the banks will issue half the annual dividend at this point, and seek separate approval in the fall for another half.

Diageo (NYSE:DEO) said it will halt its buyback program due to the pandemic but will go ahead with an interim dividend due to be paid this month. "Widespread containment actions put in place by governments across the globe in March, including the closure of bars and restaurants, are having a significant impact on the performance of our business," notes the company. In mainland China, Diageo said it's beginning to see a very slow return of on-trade consumption. Diageo pulled its sales and profit guidance due to the uncertainty created by the pandemic.
Go deeper: See Diageo's analyst estimates.

Bank of Japan Governor Haruhiko Kuroda said in a speech today that COVID-19 is having a serious impact on the Japanese economy. Kuroda pointed to declines in exports, output, demand from overseas tourists and private consumption. The Bank of Japan is expected to make a rare projection later this month that the world's third-largest economy will fall in 2020 due to the impact of the pandemic. The development would be the first time the BOJ has forecast a full-year contraction since 2014. Some economists see Japan's GDP falling by more than 5% this year. The BOJ will post its new forecast at its next rate review on April 27-28.

The pandemic fight goes on

There was a more optimistic tone at the coronavirus briefing yesterday even after New York City reported its deadliest day so far. White House officials said they see "real evidence" that lockdowns and stay-at-home efforts are working in states like California and Washington to slow the pandemic. White House coronavirus task force coordinator Dr. Deborah Birx noted cities like New Orleans, Detroit, Chicago and Boston are still seeing a high percentage of positive tests, while Vice President Mike Pence said the short-term objective is to test as many Americans as possible. Global COVID-19 cases now number over 1.5M, with over 430K reported in the U.S.

Volkswagen (OTCPK:VWAGY) said the restart of production in China is starting to gain traction. Hope is returning to the Chinese market as business levels start to normalize with all 2K dealerships open, states VW China chief Stephan Wollenstein. The German automaker reiterated a plan to add two new electric vehicle sites in China during the second half of the year with a combined capacity of 600K vehicles annually and start local manufacturing of the Audi e-tron SUV. Shares of Volkswagen are up 2.05% in Frankfurt trading.

Nissan (OTCPK:NSANY) is pursuing a credit line of ¥500B (about $4.58B), a move to boost liquidity amid the still-growing COVID-19 pandemic, Nikkei reports. That line would come from a consortium of banks led by Mizuho, according to the report. The news follows announcements by Nikkei that it would be temporarily laying off nearly 20,000 workers, including 10,000 in the U.S. and nearly that many in Europe.

Disney Plus is a hit

Disney (NYSE:DIS) says its streaming service has surpassed the 50M subscriber mark on a global basis, just five months after it launched in the United States. The service has since rolled out to more than a dozen countries - notably India, which added about 8M of the 50M to Disney's pile. Over the past two weeks, the streaming service became available in the UK, Ireland, France, Germany, Italy, Spain, Austria and Switzerland.
Go deeper: See Disney's quant ratings.

Relief for airlines still up in the air

Airlines looking for federal assistance are being asked to provide detailed info on capital structure, liquidity, loyalty programs and unencumbered assets to the Treasury Department. Most carriers have their hands out as they burn through cash at a fast clip, but are also looking for ways to avoid giving away equity. The timing of when the government funds might arrive and at what terms is still up in the air for American Airlines (NASDAQ:AAL), Delta Air Lines (NYSE:DAL), Southwest Airlines (NYSE:LUV), United Airlines (NASDAQ:UAL), JetBlue (NASDAQ:JBLU), Hawaiian Holdings (NASDAQ:HA), Alaska Air Group (NYSE:ALK), Allegiant Travel (NASDAQ:ALGT), Spirit Airlines (NYSE:SAVE), Mesa Airlines (NASDAQ:MESA) and SkyWest (NASDAQ:SKYW).

Mylan (NASDAQ:MYL) announced that the production of malaria med hydroxychloroquine sulfate for COVID-19 patients out of the company's plant in West Virginia has advanced ahead of schedule. The company is donating 10M doses to the U.S. Department of Health and Human Services for possible use in clinical studies or under emergency use authorization and making shipments to wholesalers. Meanwhile, Medtronic (NYSE:MDT) stated that its Puritan Bennett 560 ventilator will be available next month in the U.S. under emergency use authorization from the FDA. The company expects to be producing 1,000 ventilators per week by the end of June and projects that it will produce 25K ventilators across all platforms over the next six months.