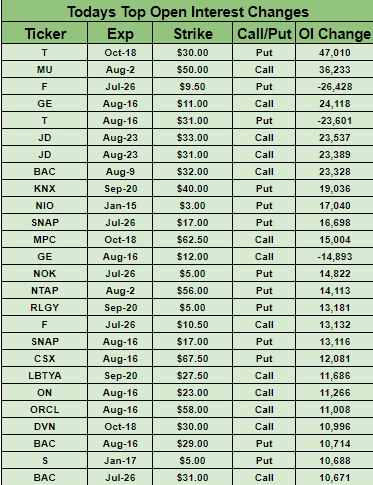 U.S. futures were mixed early Thursday as the Dow tracks higher with the S&P 500 nearly flat and the Nasdaq indicating lower after yesterday's semiconductor-driven highs. Today's busy earnings slate will start with Bristol-Myers Squibb (NYSE:BMY), Comcast (NASDAQ:CMCSA) and 3M (NYSE:MMM) among those reporting before the bell.

Tesla (NASDAQ:TSLA) shares fell after a sharp Q2 profit miss. On the earnings call, Elon Musk said the company is "close" to self-funding and he still expects a break-even Q3 and profitable Q4.

Toyota (NYSE:TM) is investing $600M into China's ride-hailing firm Didi Chuxing (DIDI) and a joint venture between the two that looks to implement new vehicle-related services for ride-hailing drivers. The new joint venture will work with Toyota's local partner in Guangzhou Automobile Group, and portends new collaboration on services they've been developing together in China.

SK Hynix (OTC:HXSCF,OTC:HXSCL) plans to cut its DRAM production capacity from Q4 due to the demand environment and tech migration. The company will also reduce its NAND wafer input by more than 15%, up from its previous plans to cut input 10% compared to last year. Competitors in these spaces include Micron (NASDAQ:MU), Intel (NASDAQ:INTC), and Western Digital (NASDAQ:WDC).

Upbeat earnings reports from Texas Instruments (NASDAQ:TXN) and Teradyne (NASDAQ:TER) earlier this week were offset by STMicroelectronics (NYSE:STM) missing its earnings estimate and cutting its revenue forecast. The news could combine with the SK Hynix (OTC:HXSCF,OTC:HXSCL) cuts for a volatile day for semiconductors.

After delaying from its planned April launch due to early problems, Samsung (OTC:SSNLF, OTC:SSNNF) now plans to roll out the foldable Galaxy Fold device in September. It will come with improvements to address problems found in testing, including an extended protective film that some reviewers mistakenly removed; trimming problematic space between the phone's hinge and its body; and adding extra metal layers underneath the screen for reinforcement.

Arianna Huffington and Benchmark’s Matt Cohler are stepping down from the Uber (NYSE:UBER) board. Both of the directors were vocal about the need for cultural and structural changes at the company under former CEO Travis Kalanick. Huffington and Cohler’s departures didn’t involve disagreements with Uber, and Huffington specifies she's leaving to focus on her company.