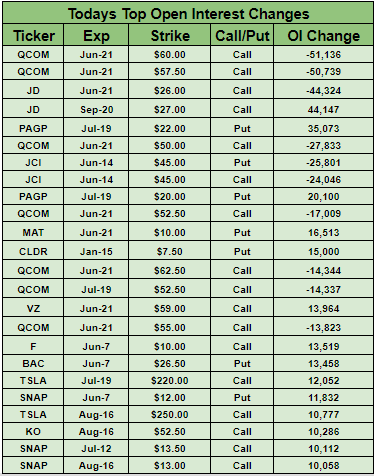 The European Central Bank announced its easy-money exit strategy one year ago, but twelve months on, the world couldn't look more different. With dovish policy signals being broadcast across the globe, the ECB's Governing Council meeting in Vilnius will be the event of the day. Traders are now betting on a cut in the next year, only months after a raise had been the consensus, while hopes are high for more details on what the central bank's renewed TLTRO program will look like. "The conceivable range for the spread (for the negative rate) is between 0 bps and -40 bps," said Natixis's Dirk Schumacher. "A small spread would imply that the new TLTROs are predominantly meant to provide a backstop. A high spread would signal that the ECB sees a need to stimulate bank lending."

U.S. stock index futures are modestly higher after booking their second-largest two-day gain of the year on hopes of a near-term rate move from the Federal Reserve. Contracts tied to the DJIA are indicating a 78-point opening bell advance, while those linked to the S&P 500 and Nasdaq suggest a 0.4% bump. The move upward follows the latest trade war comments from President Trump. "Our talks with China, a lot of interesting things are happening. I could go up another at least $300B... But I think China wants to make a deal."

Speeding up its 5G launch, China has given the go-ahead for its major state-owned mobile carriers to start rolling out next generation networks, granting licenses to China Telecom (NYSE:CHA), China Mobile (NYSE:CHL), China Unicom (NYSE:CHU) and China Radio and Television. "First and foremost, the tech cold war is going on, and China does not want to remain behind the U.S. and Korea," said Neil Shah, research director at Counterpoint Research. "Second, in light of the Huawei trade ban, (Chinese officials) want to provide Huawei with an early base to use their equipment and roll out before they don’t have access to U.S. components and gear."

Fiat Chrysler (NYSE:FCAU) has withdrawn its $35B merger proposal for Renault (OTCPK:RNLSY) as both companies pointed a finger at what they described as meddling by the French government. The country, which owns a 15% stake in Renault, reportedly pushed for guarantees that France would not lose jobs, and for a dividend to be paid to Renault shareholders, including the government. France also sought to delay a decision on the deal - which would have created the world's third-largest automaker - in order to win the support of Nissan (OTCPK:NSANY), Renault's Japanese alliance partner. FCAU -3.3%premarket; Renault shares are down 7% in Paris.

Seeking to split the cost of producing lower-emissions cars, Toyota (NYSE:TM) and Subaru (OTCPK:FUJHY) are teaming up to jointly develop an electric sport-utility vehicle. The pair will apply Subaru's all-wheel-drive technologies and Toyota's vehicle electrification technologies to the new SUV, which each will sell under its own brands. While the latter has led in technologies for hybrids and fuel cells, it has trailed behind rivals in bringing fully electric vehicles to showrooms.

Amazon (NASDAQ:AMZN) drones will be making deliveries in "months," beginning test runs of toothpaste and household goods weighing as much as five pounds. "From paragliders to power lines to a corgi in the backyard, the brain of the drone has safety covered," said Jeff Wilke, who oversees Amazon's retail business. Where will the program start? It's not known yet, but the devices will make deliveries within 7.5 miles of a company warehouse and reach customers within 30 minutes.

"Progress is being made" in talks with Mexico, according to President Trump, but "not nearly enough!" Discussions will continue today, but "unless an agreement is reached a 5% tariff on Mexican goods would begin on Monday." The peso yesterday slid as much as 1.3% as credit ratings agency Fitch downgraded the nation’s sovereign debt near junk status - citing risks posed by heavily indebted oil company Pemex and trade tensions - while Moody's lowered its outlook to negative.

Growth impulses have weakened significantly, the Reserve Bank of India said as it cut its benchmark interest rate for a third time this year. The widely-expected move saw the repurchase rate reduced by 25 basis points to 5.75%, the lowest in nine years, to support an economy growing at the slowest pace since 2014. The six-member Monetary Policy Committee voted unanimously for the cut and also switched its stance to "accommodative" from neutral.

At the company's annual meeting in Bentonville, Arkansas, Walmart (NYSE:WMT) CEO Doug McMillon told shareholders and presidential hopeful Bernie Sanders the federal minimum wage of $7.25 per hour was "too low." "It's time for Congress to put a thoughtful plan in place to increase the minimum wage," he declared. "Any plan should take into account phasing and cost-of-living differences to avoid unintended consequences." Sanders has accused Walmart of paying "starvation wages" and demanded hourly worker representation on the retailer's board.

Facebook (NASDAQ:FB) will announce its cryptocurrency later this month, and will allow employees working on the project to take their salary in the form of the new currency, according to The Information. Reports suggest users will be able to store, trade, and exchange the crypto for regular currency, in part through Facebook apps including Messenger and WhatsApp. Facebook is also planning physical ATM-like machines where users can buy the crypto and is creating a foundation with named partners to govern the currency.

Contributor Rida Morwa discusses what to do when your portfolio crashes.

Beyond Meat (NASDAQ:BYND) set to report first results as a public company.

Apple (NASDAQ:AAPL) has lots of upside from services growth, according to Evercore.