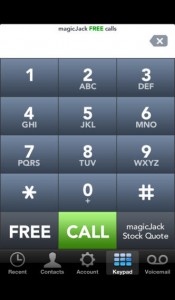 I posted my thoughts on MagicJack (CALL) back in February, when the stock was trading around $16. Yet, despite it being up $4 to start 2014, I called for the stock to trade into the $20-30 in the coming months.  A few weeks later, MagicJack (CALL) broke out to a multi-year high of $25.37, as folks started to take notice of the company after a strong earnings report. The stock has recently faded from that high, but I think it's only a short-term pullback before the next big move over $30. Why? Well I think the company is severely undervalued, and will continue thinking that way even when the stock hits $40 this year. More on that in a bit.

Whitney Tilson came out with a bullish case on MagicJack(CALL) back in February : http://www.valueinvestingletter.com/pdfs/MagicJack-My-Next-Netflix-Whitney-Tilson-2-7-14.pdf . He outlined quite a few reasons why he likes the stock, and why it could possibly be a 10x bagger in the coming years. I agree with him on all the points he makes.

There was also a nice piece in Bloomberg on MagicJack(CALL), where there was some speculation on it's potential as a buyout candidate :http://www.bloomberg.com/news/2014-03-18/facebook-whatsapp-deal-has-magicjack-ceo-talking-billions.html Again, a great unbiased piece on the company. Both are great cases on why I am bullish, but there are a few more points why I think this stock goes to $40 this year... if not higher.

Some of my best trades over the past few years have been on stocks that have had the similar characteristics as MagicJack (CALL):

LinkedIn (LNKD), Boston Beer (SAM), Netflix (NFLX), and SodaStream (SODA) have been a few of the stocks having the same characteristics which returned some huge gains, and I am betting that MagicJack (CALL) is going to follow in their footsteps. Here is why:

I am not going to pretend to think MagicJack (CALL) will be bought out. Trading a stock for an endgame like that will surely have folks disappointed. But I do think past and recent acquisitions can help put a valuation on a company in the same sector, and the recent acquisition of WhatsApp by Facebook(FB) for $19 billion, and the purchase of Skype by Microsoft (MSFT) in 2011 for $8.5 billion, help shed light on a possible valuation of MagicJack (CALL).  Why? Because it helps put a value on something that is not deriving any revenue or profits for MagicJack. Using the $42 per user that Facebook paid for WhatsApp, Magicjacks app is worth $289 million. If you use the valuation of $95 per user some have given WeChat, that number jumps to $655 million. Considering the App user base grew 200% in 2013, yet MagicJack (CALL) was down 35% in that same period, I am going to assume the Magicjack app value has not been factored into the current stock price. So using those valuations, you have a stock that should be trading at least $16 higher from it's current level of $22.66, which would be $38.64 or as high as $59.73.

The MagicJack APP has grown leaps and bounds in 2013: 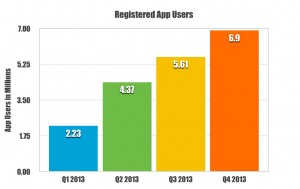 What does it do? It allows you to make phone calls using Wifi to anyone in the U.S or Canada. Unlike Skype, the person on the other end  does not have to have the same app installed or running to receive the call. The big deal here is that MagicJack has done little to no advertising on the app and it has grown to nearly 7 mill users. Not wanting to draw folks to the website until the update and until it had a better customer service plan in place, the company has curtailed advertising spend: 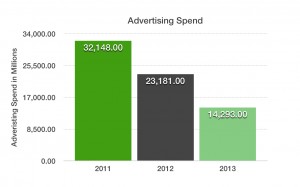 So the App has grown despite this. Imagine what happens when they start to execute on an advertising plan?

Even more forward looking on the App is the transformation of the internet and how folks access it. Free WiFi would be unthinkable a few years ago, yet it's a reality in most retailers, restaurants, coffee shops, and hotels. Heck, even the NYC Subway system is working on a solution: http://www.nycsubwaywireless.com/ . And the Subway is probably the best example of the future of communication. One without a wireless provider needed to make a phone call. Imagine what needs to happen at Verizon, AT&T, and T-Mobile when folks can rely on wifi to make phone calls without their networks? What happens to those $100+ bills? It will be here sooner then folks think, and companies like MagicJack(CALL) are ahead of the curve.

I was out to dinner the other night and like any investor/trader, I was eavesdropping on a loud conversation. "Go down to the business center in your hotel", one person said. What were they talking about? A trip abroad, and how to call back home. Another realization that most folks don't know about MagicJack(CALL) and how they can make free calls back home using MagicJack during a vacation... just one of many opportunities that are, and will be there for MagicJack (CALL).

I have yet to mention the existing business, which is doing surprisingly well, despite the lack of advertising, and the refresh on the website and its customer service. Renewal business, which is the bread and butter of a subscriber service, was up to 40% of revenue from 28% in 2012, meaning folks are sticking with the service more now than ever. The company also ended 2013 with 54.8 million in cash and cash equivalents, and no debt. The cash alone is worth $3.07 per share. This is a fundamentally strong company trading at a forward p/e of 10.81, well below companies in the sector and competitors like Vonage(VG) ,which sports a 23x forward p/e.

The last piece to this trade, is the short interest. As of March 14th, there were  5.6 million shares MagicJack (CALL) sold short or nearly 40% of the float. Why? Because folks continue to bet against a story they think is coming to an end. A legacy phone story. But what we have here is a company that continues to produce profits, and is evolving into a Social Mobile Communications Company. A company that is very hard to value in the current space... which is why I think it is headed much, much, higher.

Below is the chart of MagicJack(CALL). It has started to bounce from a pullback under $20, and think it's setting itself up for a break above $25 in short order. I think MagicJack(CALL) will trade above $30 in the coming weeks, and $40 by summer's end. 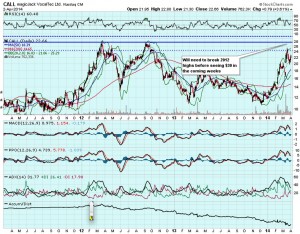