Now that earnings are behind us, the question is what to do with AAPL: buy, hold, or sell? Prior to the earnings report, I took a full position in the April 2015 $85 calls for $12.75. The reason I chose the so far ITM was because I wanted to protect myself in case AAPL would sell off after earnings. This ITM strategy would protect my investment by allowing me to be able to sell premium against my long position, thereby lowering my cost. As long as a long call is ITM, it is relatively easy to sell premium, which should lower the initial cost. I plan on holding AAPL until at least the September launch, and possibly farther out, depending how the broader market looks and how the technicals are on AAPL. I will not be adding to my AAPL position since I am already fully invested. If I were not fully invested, at this point, I would look to buy January 95 calls. They are ITM, which allows you to sell premium right now. Furthermore, AAPL has support at $95. This means that even if AAPL were to pullback, you would still be able to sell premium to lower your cost.

In this article, I will briefly discuss the reasons to own AAPL, based on both the fundamentals and the technicals of this stock.
Fundamental Reasons:

AAPL is about to enter the biggest product launch ever, with demand rumored to be upwards of 70 to 80 million iPhone 6’s as per the WSJ article that was published recently. The growth in iPhone sales will once again launch AAPL into a growth company. The best part about that is that AAPL’s P/E ratio right now is at around 15-16, lower than the S&P 500 and lower than almost every growing tech stock out there. How about the fact that AAPL’s P/E is lower than MSFT, INTC, and CSCO? All of those names are the ‘old tech’ names that are supposedly cheaper than all of the ‘new tech’ names, yet AAPL, which is considered a ‘new tech’ name, is cheaper than all of those names and has a better growth rate.

Furthermore, AAPL will also be launching into a new product category, wearable technology. Many are questioning whether this is a viable space, but say that a bigger reason to why AAPL has rallied has been due to speculation over how big an event the iWatch will be. Analysts are saying that they are not expecting that much and that one effect will be lower gross margins. Because of this, I do not think traders and analysts are pricing in the effect of the iWatch and other new products like the Apple TV. With the economy slowly improving, as seen by a decreasing unemployment rate, better consumer sentiment and housing data, I believe that people will start to spend more money. And what is cooler than a brand new iPhone 6 along with a new iWatch? Remember when the iPad Mini came out and analysts were not expecting much from it? They thought that because people like a big screen of the regular iPad better, they were not going to flock to the iPad Mini. The impact of the supply constraints also led to many analysts to dismiss the Mini as a viable growth measure for AAPL. They were wrong; the iPad Mini sold out. There was so much demand for it, as was seen by the large percentage of iPad Mini’s sold compared to the regular iPads. I think the iWatch will command a similar high demand and will be sold out. This will lead to an increased multiple for AAPL shares.

There are other reasons why AAPL should go much higher fundamentally. First, Mac sales unexpectedly grew, coming in at over 4.4 million, versus an estimated 3.9 million, in this last earnings report. Second, and I think most importantly, AAPL is having a phenomenal growth in China and the emerging markets. China saw growth upwards of 50%. AAPL’s fundamentals alone support higher prices, but what about the technicals?

For months now people have been expecting AAPL to go to $100 a share and then stall because AAPL previously topped out at that level. I think that AAPL will blow by the all-time high of $100.72, and go much higher. AAPL will find resistance at $100 and $100.72, but due to the current market climate, I do not think it will top out, and therefore not form a double top. Many said that NFLX was going to form a double top at $330; it now trades at $430. Even better, AAPL has a much better fundamental picture than NFLX and also has a very nicely formed rounding bottom. 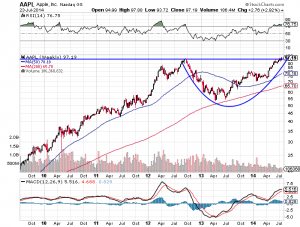 AAPL went parabolic in early 2012, rising more than 60% in the first quarter alone. Right now, AAPL is only up 20% on the year, so to say that AAPL’s recent run is not overdone. The biggest argument a bear can make right now is that too many people are bullish on AAPL, and that bullish analysts have too lofty price targets. The fact of the matter is that besides the most extreme $135 price target, all the other price targets are only 10-15% out, which is minimal for a stock like AAPL. If the broader market sells off, people will transfer money from the higher beta names and put it into a fundamentally sound company like AAPL, something that has been going on for over a year now. Right now, we are in the optimistic stage of AAPL’s bull run. AAPL has been in a bull market for the last year and is currently in stage 3. The first stage was denial, where nobody thought AAPL would ever come back up to the previous high and that AAPL would never be a growth company again. Then stage 2 occurred at the pre-split level of $500, where investors such as Carl Icahn bought up shares as a value play rather than a play on renewed growth, so the sentiment subsequently shifted from denial to pessimism. Although people liked AAPL as a value play, they felt that it was going to stop growing. Then in April of this year, AAPL had a monster quarter and we entered the optimistic phase, in which people expected earnings to grow again, supported by future, successful product launches. In this optimistic phase, many analysts increase their price targets, but conservatively. I assure you that in this market where high beta/tech stocks move 2-5% a day, having a 12-month target of only 7% out is conservative. Currently, the average price target is a little over $105. Now I believe we are going to enter the euphoria phase. 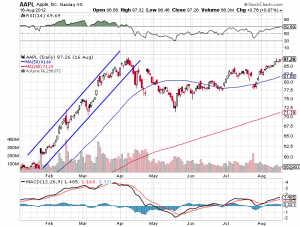 How can you tell? Today, we saw the first sign, as over $10 million in calls were bought today in the options pit. That is a lot of paper for one day! Many of the calls were September calls, specifically the $105 calls, betting the stock hits $105 by September expiration (which is 1 week before the iPhone launch). The second sign will be when analysts raise their targets above $125 and $130 and then finally above $143. $143, why such a weird number? The $143 level would represent the pre-split price of $1000. Remember when there was a price target of $1111 on AAPL before crashed, which was right near the peak of AAPL? Lastly, what will definitively indicate that we are in the euphoria stage? We will have to see higher than average volume on a daily basis, and will have to see wider, more erratic moves to the upside, coupled with a spike in implied volatility. This will signal to me that the demand for call options is at euphoria levels and that it is time to sell my long position and then wait for a pullback.