Last July, we reversed our sentiment on Baidu (BIDU), as the company finally started to execute on some growth initiatives and acquisitions: https://www.optionmillionaires.com/baidu-bidu-next-stage-of-growth/  At the time, the stock was trading around $112 and had only just broken above $100 a few weeks prior.

Since then, the stock has rallied to over $180 per share as the investment community and analysts alike jumped on board the Baidu (BIDU) bull train. Why is that important? Well, we think the same thing has happened with another China ADR: Sina (SINA).

After the stock soared to over $140 in 2011, investor and analyst concerns over monetizing its tremendous subscriber base as well as possible government censorship had the stock trading down into the $40s by the end of 2012. Unfulfilled promises continued to act as a drag on the stock until the past two quarters, when the company finally showed some signs of being able to truly monetize its subscriber base. Additionally, SINA introduced several new initiatives intended to drive growth.

With everything it's done in the recent past, it now looks to be the right time for Sina (SINA) to finally break out and head over $100. There are multiple catalysts on the horizon that can really fuel a rally in the stock, I feel: In April, Alibaba grabbed an 18% stake in Sina (SINA) with an option to increase that to 30% at some point.

One would think Alibaba would wait for their IPO before adding that position, but with Sina (SINA) moving up wouldn't it make sense to complete the purchase? You also have a strengthening China economy when only months ago folks were hyping up the China crash landing, a scenario that seemed to put a top on some of the China ADRs. Folks have also been using Sina (SINA) as a model for Twitter (TWTR), which just shows how far they have come.

We love Sina (SINA) here, and hold $83 and $85 calls that we announced via our text idea service.

Just remember: like every trade, nothing is certain. But we really like this setup on a risk-versus-reward basis and we think the stock could top $86 before the week is out, before it heads even higher to more than $90. 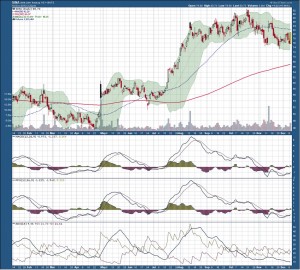