SINA is a stock that is constantly on our watchlist, as it has a history for making some nice profitable moves since it's fall from grace in 2011. Questions around it's ability to monetize it's gigantic subscriber base, and Chinese censorship concerns weighed on the stock for the past 16 months, and shares are now trading at $56, which is $90 off it's spring 2011 highs. We have been watching and waiting for positive catalysts on this stock and looks like today we started to get some.

SINA and Qihoo 360(QIHU) announced a partnership today: http://www.marbridgeconsulting.com/marbridgedaily/2013-01-22/article/62860/sina_qihoo_360_partner_on_browser_gaming . This is the part we like the best from the news:

Chuangshi Sanguo Online is the first step in Sina and Qihoo 360's partnership, and will be followed by more cooperative efforts in the future.

With China showing better then expected growth and SINA showing signs of monetizing it's subscriber base, we think the days of SINA being punished are nearing its end. Looks like the folks shorting SINA shares are starting to agree with that thesis as short interest is at a 12 month low, with only 5% of shares short.

We currently hold January $60/62.50 calls and will be adding more calls throughout the week. 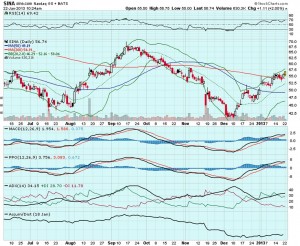