Shake Shake ($SHAK) is one of my Top 5 favorite stocks for 2017 with an expectation that it will be up at least 35%+ at some point in 2017, which would equate to at least a $48.31 share price. One quick glance and you can see that prediction is off to a rough start with the stock down 9% to start the year. Throw in the towel? Not me and not now. The story has not changed since the end of last year, and if anything, has improved.

First, here are some of the characteristics I look for when picking my Top 5 favorite stocks each year:

The company grew top line revenue 41% in 2016, which was above guidance and opened 20 locations last year, again, above guidance. They also raised 2017 revenue guidance with expectations to grow at least 30% this year. Shake Shake ($SHAK) trades a little over 4x's 2016 revenues, yet so does McDonalds ($MCD), Chipotle Mexican Grill ($CMG),  and Restaurant Brands International ($QSR). Those companies have negative to single-digit growth yet have all outperformed Shake Shake ($SHAK) since the start of 2016. I think that gives some credibility to Shake Shack's ($SHAK) current valuation... or lack thereof. On Friday, a Suntrust Analyst came out raising his price target on the name to $50 based on... you got it, growth(from Barron's which Irnoically added $SHAK to their namesake Barron's 400 ETF yesterday) : http://www.barrons.com/articles/after-a-strong-2016-our-namesake-etf-reshuffles-1489814486): 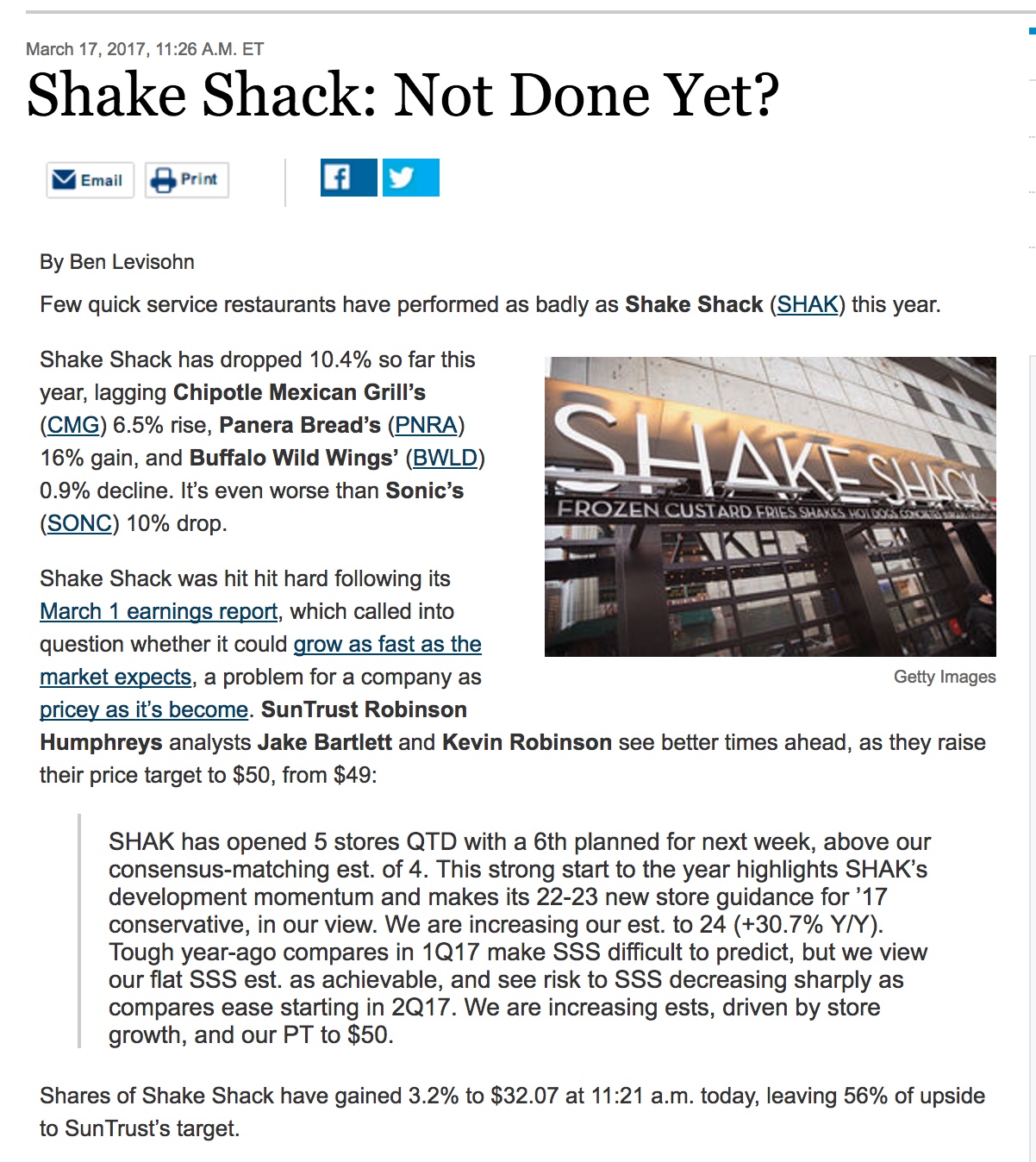 The Pincher. Enough said. Trying to time a bounce on a stock and catch a falling knife can lead to lost fingers, or in this case, lost capital. It's not often I find a pincher setup on a stock I love, which makes it even easier to get long via calls. Friday's action confirmed the reversal and I can see the stock trading over $34 in the next few sessions: 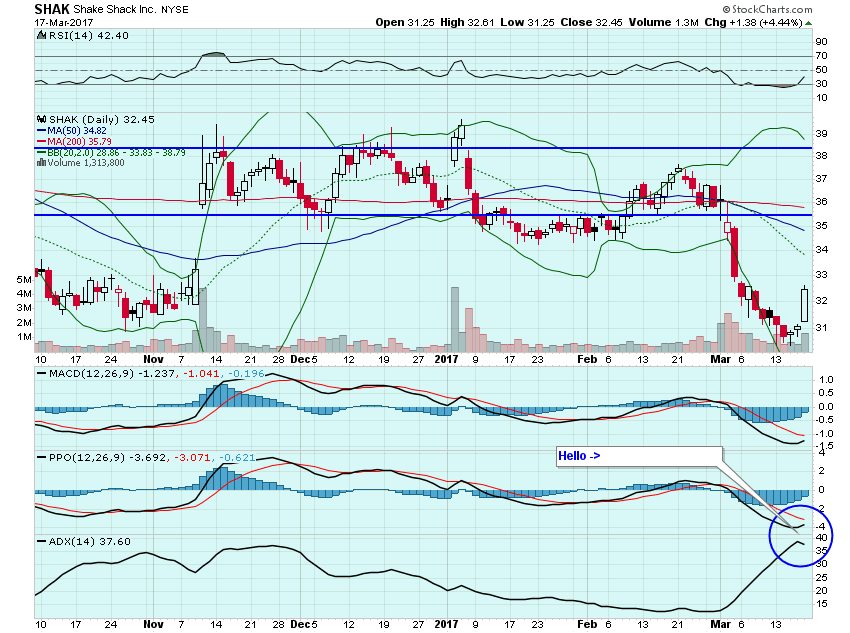 The stock sports a staggering 43% short interest, as bears think the company's growth will slow due to competition, wages and costs will rise, and the stock is overvalued :

There is also the possibility of a forward catalyst that could really fry the shorts... Breakfast. A great read for those bears that have never eaten at a Shack Shake and think there is zero moat around the business : http://ny.eater.com/2016/12/7/13872340/shake-shack-penn-station-breakfast-sandwich

In summary, I am bullish the company and stock, although it may take a few quarters for the stock to break into the mid-high $40's. I added some $32 calls last week, closed some out on Friday afternoon to cover costs plus profit and may look for some more strikes next week to play for the squeeze. 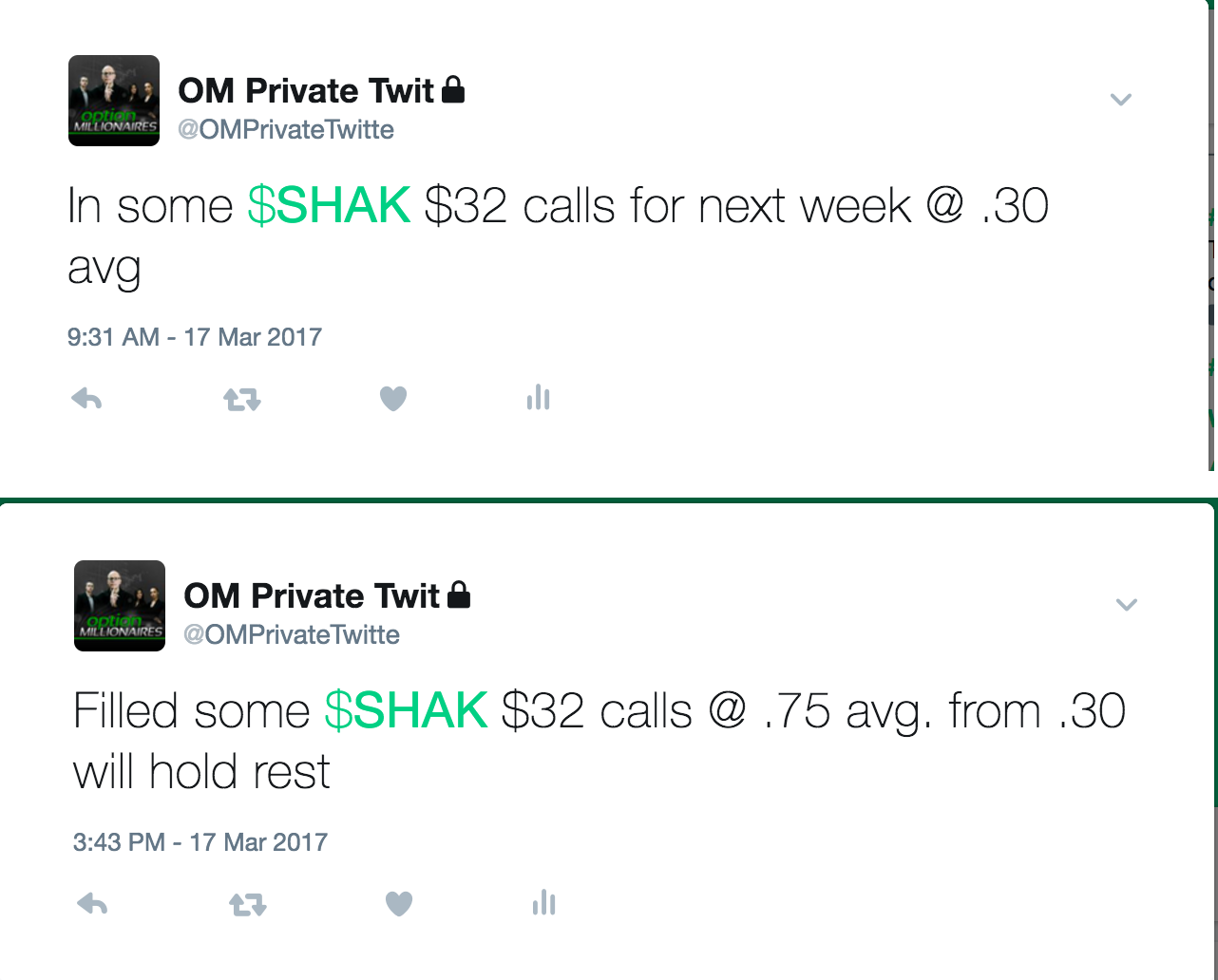