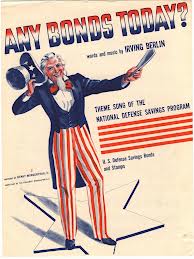 Just weeks ago the weakness in tech and small caps had everyone calling for a pending market collapse.  This morning we hit a new record for the S&P 500, yet the focus is on the next excuse to sell instead of celebrating the new highs.

Last year we had Syria, Cyrpus, The Sequester among the headliners for the reasons to sell stocks.  This year Ukraine, the Tech Wreck, Small Caps and now........BONDS!

If you perused the headlines over the last few months you would think the stock market was in a tailspin.  The momentum stocks are down 40%, the small cap index is in shambles, and now the Bond market is telling you its time to sell.

Every single named excuse to sell stocks since the lows in 2009 have been a great opportunity to buy stocks... not sell them.

Here is  one post I penned about this phenomenon:  https://www.optionmillionaires.com/as-long-as-these-pullbacks-have-a-name-stocks-head-higher/

It seems everyone is fighting to be the one to call the top for this market instead of focusing on profiting from the uptrend in stocks.  Rest assured those who have been calling a top for the market every month since 2009 will be right at some point.  And I am sure they will let you know just how right they were. But how many more failed head and shoulders topping patterns will it take them until they finally do get it right.

What if there is no market to compare to this one?  Have the prior market crashes had historic levels of central bank manipulation?  Were the markets as globally integrated as they are now?

Try if you must, but this market has no equal and the more I see it defy any and all comparisons the more I see a market that remains unloved, unappreciated, and incomprehensible to most.

So it is now we are encountering yet another reason to sell.  Another reason why stocks are poised to fall.  Bonds.  They remain well bid in spite of a stock market at record levels.  How is this possible?  Surely the money flowing into the bond market will take away from the juice that is flowing into the stock market.  Yet since the FED officially started the Taper late last year they have been moving in the same direction and most notably so the last three months. 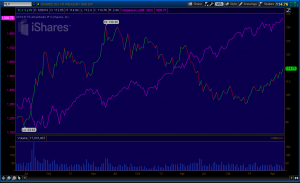 What we've learned is both bonds and stocks can rally in tandem in this centrally planned market place.  The excuse being made to sell stocks is that the bond rally implies a flight to safety.   I, on the other hand,  think it implies the strength of this market, that stocks can, and have, rallied in the face of any reason to be weak.  I think the Bond rally is bullish for stocks!  What?  I think a pull back for Bonds will help fuel stocks to fresh all time highs, and that this Bond excuse will be forgotten, just like the recent head and shoulders topping pattern will be forgotten, just like Cyrpus has been forgotten....  you get my point.

Don't ignore the past, but also don't think every time period in the market is an exact correlation to a prior time in history.  We are in uncharted territory.  The S&P 500 is a record prices and central bank manipulation has never been more pronounced than it is today.

Bonds may rally, they may fall, but another excuse to sell stocks?  I don't think thats the call.