After today’s market sell-off, the VIX rose a mammoth 35% and the VXX rose 10%. Two major global issues occurred today. The Malaysian Airline plane that was shot down, killing all on board, worried traders. In addition, Israel began a ground attack on Gaza. All of this led to the S&P 500 having its first down 1% in over 60 trading days and has given us another geopolitical crisis. What now?

I agree with many who stated that the fear will subside in the coming days and weeks. Most geopolitical crises do, and, therefore, what I am looking at doing is to short the VXX through short naked calls. This strategy is very risky, since you have the risk of unlimited losses, but the time to do this trade is when the IV on the VIX/VXX has risen dramatically.

After today’s VXX jump, the IV sits near the 60-70th percentile, which means that on a relative basis, the options are very expensive. I think that the market will sell-off more over the coming two days, as people will continue to worry. Geopolitical events usually have a negative impact for a few days before fears subside. I am looking to short the VXX September $40 call at around $1.30. Right now, it trades for $1. The VXX bottomed out at $27.5. Over the last couple of years, on past corrections, the VXX has not risen more than 30-40%. This means that if we had a 5-7% pullback, one could expect the VXX to rise to around $35-$36. Now I do not think we get a 5-7% pullback, but it is always important to line out the worst case when doing a trade. If we get a bounce in the VXX to $32-$33 on Monday, then I think it would be an excellent time to short the VXX. At that point, the IV on the VXX calls would be so high that you would need a very big move for those calls to make any money on the long side. This offers a great risk/reward for the short calls. In addition, if the market were to bounce, the VXX would get pummeled and so would the calls, because not only would the VXX fall, but also the IV will implode on any VXX sell-off/SPY rise.

This is a very risk strategy and not for everyone. I have done this before and have been successful at it, but it should be noted that selling naked calls at any time is very risky. I would not suggest being long puts in the VXX because I believe that those are too expensive to make any money. Worst comes to worst I am forced to short the VXX at $40 on expiration. To me this is not a problem, just look at the chart of the VXX over the last few years. 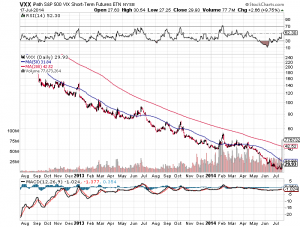