I will have an update on Sears Holdings (SHLD) at some point in the next few days, but wanted to point something out on this spinoff of Lands' End (LE).

This will the the third such spinoff by Sears Holdings(SHLD) in the past 2 1/2 years.  Seems the first two spinoffs preceded huge moves to the upside in the Sears Holdings (SHLD) stock.

Whats my point? Spinoffs have been a boost to Sears Holdings(SHLD) share price. But thats not the only possible catalyst coming for the stock. The first two spin-offs were different then this current one for Lands' End(LE). Both Orchard Supply and Sears Hometown and Outlet Stores spinoff's allowed shareholder of Sears Holdings (SHLD) stock to profit from the transaction but not in the simple  "You get xxx shares of the new company for every share of Sears Holdings (SHLD) you own". The most recent spinoff of the Hometown brand included a rights offering for shareholders. So what does that mean? That those betting on Sears Holdings(SHLD) stock to go down via shorting shares, were not effected.

This time it's different with Sears Holdings(SHLD) shareholders getting .30 shares of Lands' End(LE) for every share they hold. Now shorts are in a position that doesn't happen very often, they will be short two companies after March 24th.

Did Eddie Lampert just engineer a monster short squeeze? Considering short interest in the stock is at an all-time high of 17.4 million shares or 22.6% of the float, the timing could not be better.

Will have more on Sears Hooldings (SHLD) in the coming days. Check the chart below for trading action after the last two spinoff's. I currently hold March 50/52.50/55/57.50 and April calls. And I may buy or sell more in the future.

If anyone has some feedback on the implications of being short during a spin-off, please chime in. I don't pretend to be an expert in any field and my thoughts here could be way off base... 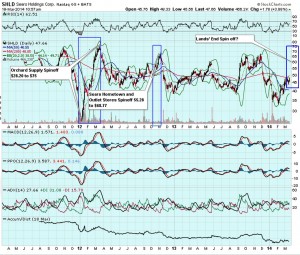