This morning I bought calls in $GOOGL. I have the weekly $585 calls and the September $580 calls. I think GOOGL makes its way back up to $600 and then tests the post-earnings high of $615. We had a nice pullback and I think we are going to breakout above $580 in the coming days. There is a lot of paper in the September options, specifically the $575 calls. Today alone (at the time of this writing) there is over $1.5 million in calls bought.

There is a dragonfly doji forming on the weekly chart, a sign that we have put in a bottom. The reason I am buying the ATM September $580 calls is because the market is still in a dangerous spot and if the market were to pullback a few days, I still want these calls to have a good shot to make money. The relative strength in GOOGL today tells me that it will hold up well in any pullback. My target is $600 for the sell. I may sell sooner if first, the broader market looks very weak and shows signs of breaking down (but I am still up on the trade), or two, if GOOGL shows signs of underperforming the broader market (one sign would be a failure to break $580 the 50dma). 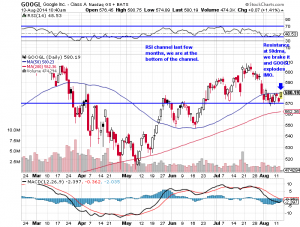 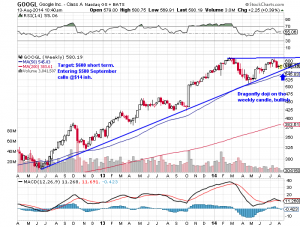 2 thoughts on “Playing for a rally in $GOOGL”