AAPL seems to have a date with the $100 level and it seems like it will get to that level within the next few months from now, in the Fall of 2014. The problem with playing weekly options is that the weeklies are well known to be premium killers, therefore, one strategy to play AAPL is to purchase call calendars in which you buy longer term calls, preferably January, and then, every week sell weekly calls to finance the
purchase.

The ATM calls on AAPL are approximately $6.30; what I would do is sell the weekly $1-$2 OTM calls and try to collect $.15-$.20 every week, for the next six months; I would probably be able to collect approximately $3-$5 of premium to finance most, if not all, of the cost of the longer-term calls.

This kind of a trade only has a profit target of 100-200%, but the likelihood of AAPL getting to that hundred dollar level is very likely due to the all-time high being at that $100 and the strong magnet that stocks have as they approach the $100 level. Even if it took AAPL six months to reach the $100 level, if you were able to bring the cost down to approximately $2-$3, you would have a sizeable gain if AAPL hit $100. At that point, the option would be worth approximately $10, and would give you a gain of $7-$8 on a cost of $2-$3. Therefore, the profit would be around 100-300%, depending on how much premium you would be able to sell.

One thing that is important to remember is that it is still possible to lose money selling shorter-term calls. The way that you would lose money with this approach is if you sell the call and then the option gets ITM by more than the cost of the option. For example, if you sold the $93 call for $.20, and if on Friday expiration AAPL closed above $93.20 you would lose money on the shorter-term call. When doing this strategy, I like selling OTM calls and not ATM calls to give myself the peace of mind that the option should close OTM so that so that I can retain the premium I sold. There will be some weeks where the OTM calls will lose money but a stock like AAPL does not make that many large moves that should deter this strategy. Selling ATM calls is only smart if you think a stock is going to go down the following week, or you think that the upside is really limited in the near term.

Looking at the chart on AAPL, one sees that it has formed a rounded bottom with a target of $100, with the previous all-time high as $100, and one would assume that it would complete the rounded bottom with the target of $100. One example of a rounded bottom is Netflix, which had a round bottom from $330 down to $70 back up to $330, and now sits at $450. Now Netflix sits 30% higher than its previous high. AAPL is not as volatile a stock as Netflix, so one can argue that AAPL has an upside to at least $105-$110 by the end of the year, as long as they continue to provide investors with positive results over their products. If AAPL where to hit the $105-$110 mark the January call would make over 200-300% (not included any premium selling), which would be very good for a longer-term bet.

The fundamental story lines up well for AAPL. The company has solid earnings and should have a steady stream of new products in the coming two quarters. It is one of a few “new” tech companies that has a good P/E ratio, and actually has a fundamental story to support its stock price. The broader market is due for a pullback, but AAPL has never been affected too badly by corrections. For the past few years, AAPL has been seen as a safe haven for many investors when a correction comes. Therefore, I do not see a potential correction harming AAPL for more than a few weeks. This is another reason why I like the January 2015 calls. 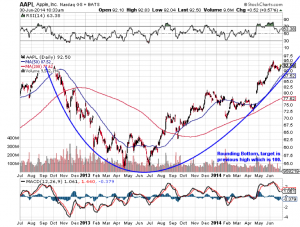