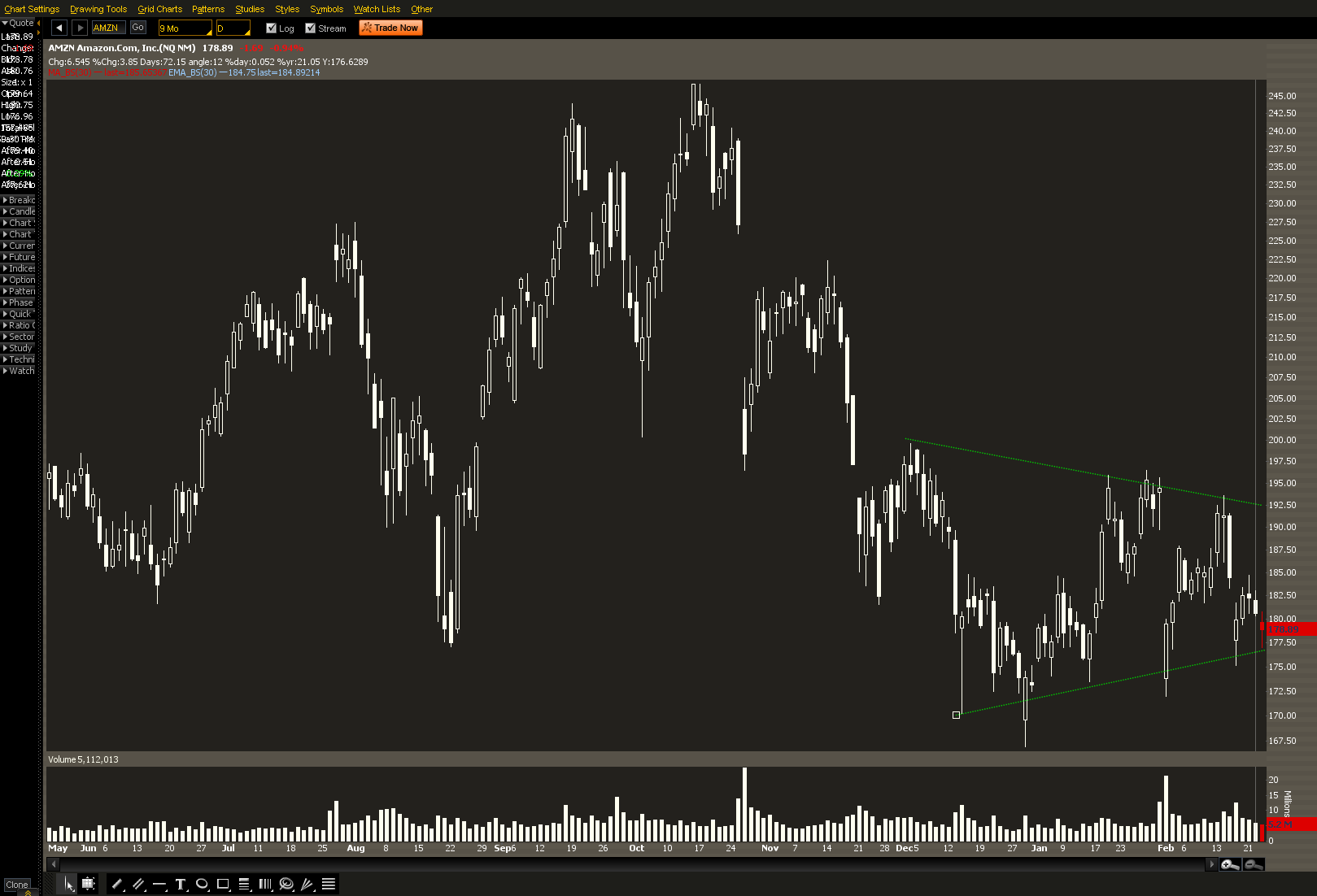 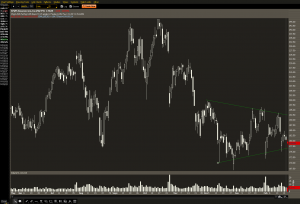 With every Central Bank East of Mars and West of Venus printing fresh, free,fiat currency.... with zero interest rate policy here from now until the bitter end, every growth stock (cue in CRM theme song) should see money pouring into it. P/E 1,000? 2,000? Who needs a PE when you've got QE! Which takes me to AMZN. AMZN bounced off support today and looks ripe for a run to the low $190's. 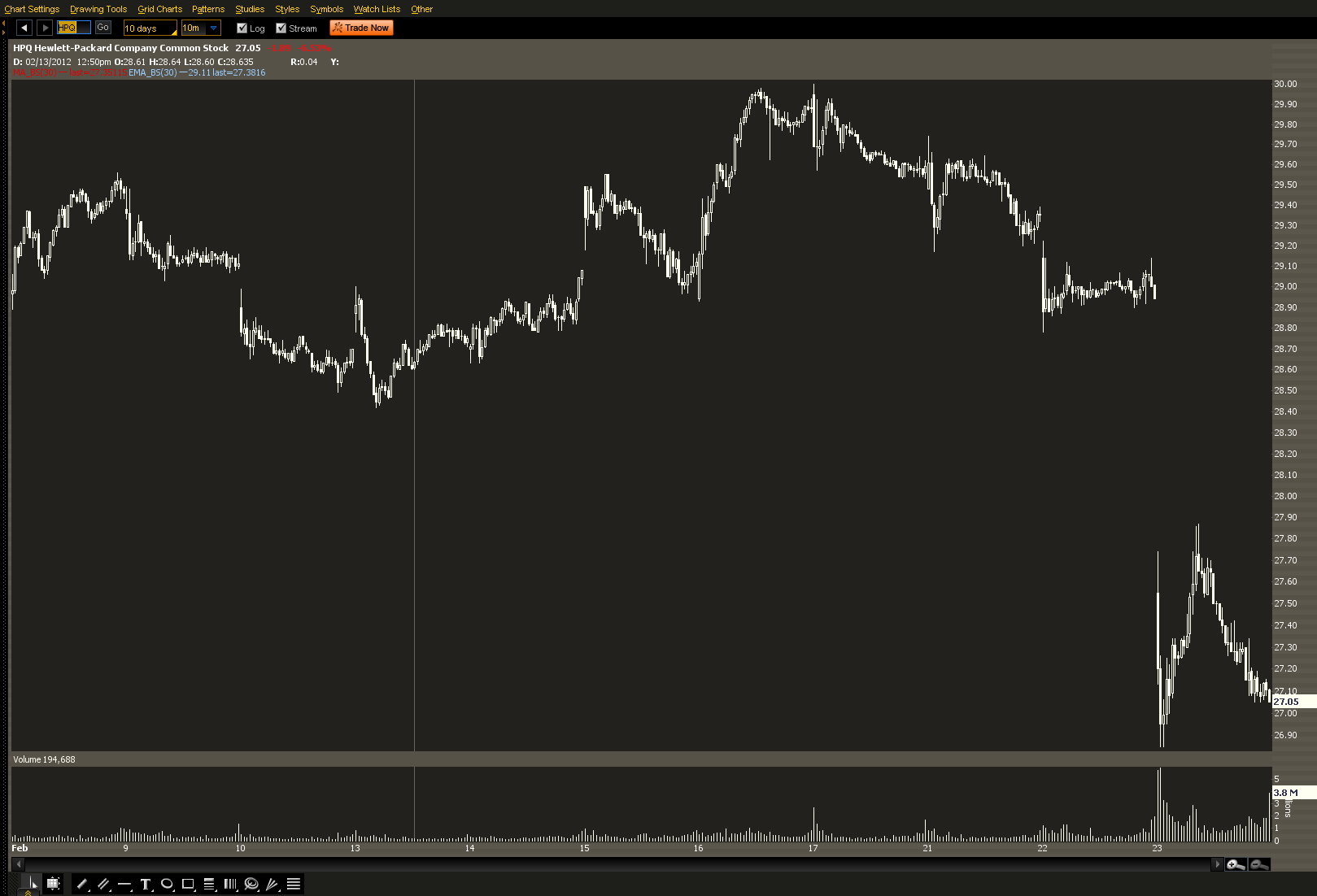 Yesterday in the chat room I gave a nice earnings trade. I said I was buying the $28 HPQ puts and the $30 calls for earnings. It ended up being a profitable trade. My thought process involved HPQ's prior earnings and the fact that I think HPQ is still not on firm footing. Most people see Hewlett Packard and think Desktop computers. Guess what? Desktops are dying. How about HPQ's foray into tablet computing? Do you know what DOA stands for? I do have an HP touchpad, so it wasn't necessarily DOA, but they killed it right away... all things considered it was an awful move for the company. Which brings me to my HPQ earnings play.

I bought both puts and calls as I saw a 5% or better move coming. The stock ended up sliding more than 6.5%.

If HPQ had traded steady I would have lost out on both trades for an almost total loss. There is risk with options, but if you know what your doing, that risk can be limited. I had a strong feeling a big move was coming in either direction and I profited from that big move. 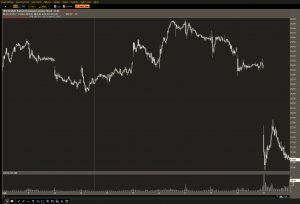 We wrote about SodaStream International last week, and it's quite easy to figure out where we think this stock is going. Thinking is one thing, but actually going? Well thats where Option Traders make their money. Sometimes folks relate the stock market to a casino, where folks place bets in the hopes of getting some return on their investment.

And there is no better measurement then the current months options.

And i don't want to flatter myself or the site in saying we brought folks into the call side.

When in doubt, do what failed in the past, and if it fails again keep doing it forever.... or until we get a collapse the likes the world has never seen before. Yes I am talking about Quantitative Easing a term that my 5 year old daughter is familiar with. Even she knows the bank in Monopoly doesn't have an unlimited amount of money in it. You can imagine how fun it was to play that game with Ben Bernacke when he was growing up. When it was time to put the game away I can picture all the fake bills dangling out of the bottom of box. Now he's doing it with the Worlds Reserve Currency, and the go Directly To Jail space has been replaced with Global Economic Catastrophe. When he hits that space I doubt a $200 fine will set him free.

What's become obvious is that the FED and almost every other Central Bank is going to print and print and print their way into growth. They are creating those Monopoly Dollars and flushing the system with liquidity. They are lending out those Monopoly Dollars to the Banks at zero percent. Here have it for free, and make sure you hike that jobless poor saps credit card to 29.99%. That should help grow the economy. While your at it raise their bank fees and charge them for everything you can, even taking a shit in your bathroom. While your busy doing that, we at the Fed intend to butt fu*K every honest saver. You know.. the ones who lived within their means, saved their money, planned for their retirement. Yes instead of rewarding those people, we will give all the free money to the banks who got us in this mess in the first place, screw the ones who are paying their taxes, saving their money, and living modestly and within their means, and let the irresponsible ones skate free. The retirees who depend on interest income... screw them. Let them find another way to make money. Force them into the broken stock market, that has and will crash 20-50%. Hard working Americans who saved their whole lives to retire are finding themselves in a very bad situation all because of Ben Bernacke.

QE to Infinite and Beyond. There is no way out other than to continue printing money. We can see how well QE gooses stock prices. Right now we are a month into QE3 (ZIRP and impending QE3 just like in August of 2010). Look how smooth the chart is.

BTFD when stocks fall, but they never rip too much, just enough.... hmmmmmm. A methodical rise in stock prices that has the FEDs finger prints all over it, and makes Obama look great in an election year. For the few that still have a job and a 401k, their feeling a little more wealthy. For the countless without a job.... they are poorer by the day. As the market rips, we get higher commodity prices, which trickles down to higher prices for everything from Milk, Orange Juice, Bread. That certainly isn't helping anyone let alone the poor and middle class.

The bottom line, QE is not ending. It never will. The FED has backed itself into a corner. There is no way out.

As Option Traders a great strategy during QE is to buy calls. Buy calls on every dip. The only puts you want are on the inverse ETF's. (Be aware: They do let stocks fall every so often so its not a perfect science). Take a day like today when it looked like stocks were going to fall 1-2%. Somehow we just rode higher, like on a magic carpet. Don't ask why. Just trade what you see. I see a pile of fake Monopoly Dollars getting thrown into the market on daily basis. With ZIRP, Infinite QE, and a bubble in treasuries, there is no place better than stocks and thats exactly what the FED wants. No sense fighting someone with unlimited firepower.

How do you make money in this market?? You find stocks that are undervalued and you buy them. Better yet, find stocks that Jim Cramer says "Stay Away", and buy calls on them. We did that on PCLN at $445, and we did that with FOSL(Fossil, Inc) this morning. It must have been Jim Cramer, and his "Stay Away" team, that provided the fuel for the FOSL rocket ship today. You can say the shorts sure know how to put a smile on our faces.

This is what we said about the FOSL(Fossil, Inc) this morning:

FOSL – had earnings that missed expectation on the revenue side. Maybe a nice bounce play with premiums. May look at some $110 calls

Plays like these don't happen everyday, but when they do, they make your year.

Once again, thank you Cramer for bringing this to our attention.