At least once per week, we will issue one of our best trade ideas that we have executed via Text Alert. This months alerts were SodaStream (SODA) April 55c @ .30 on April 1st, and Shutterfly April 55C @ .30 on April 8th. SodaStream(SODA) took some time, but finally hit $1.50 yesterday, a 500% move. 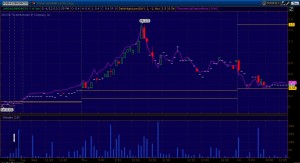 Shutterfly started nicely and has moved up ever ever since, hitting $1.05 today for over a 300%+ move. today. 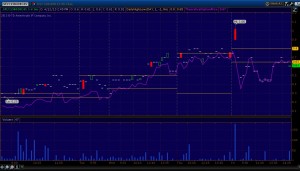 Not every trade we make is profitable, so please exercice caution and do your own due diligence before entering a trade we make and send out via text.

Stay tuned for next weeks trade via text.

Another great day with some awesome calls in chat by quite a few folks. BBBY had a great fade at the open, which had UPB screaming like his favorite Football won the Super Bowl. PCLN continued it’s ascent and added another $17 yesterday, making the $730 calls worth over $6.00 from .48 on Wednesday. SODA exploded and hit 55.60, with the 55 calls we alerted via text two weeks ago hitting $1.30+ from .30 entry. SFLY also broke over $45 and our Monday alert of the $45 calls at .30 hit over .90. CMG shares were weak all morning and then pulled back even further as it was a short idea by a fund manager. CMG moved from $318 last week, to $350 this week so it was an easy target for folks to come in and cause a sell-off. Could see some continued selling if it breaks under $330 and I did grab some $325 puts @ .35 as a hedge vs my calls. Second time I have bought puts in 2 weeks, a record for me over the past few months!

Futures are down around .50% on some weaker March retail sales numbers and a pullback in the global markets.

Gold and Silver are down today, with Gold losing nearly 2% or $30. I expect this trend to continue over the next few months as Gold heads towards $1300 and below.

NFLX Netflix is a top pick into the quarter, says Barclays

Netflix is one of Barclays' U.S. Internet top picks into the quarter as it sees upside to Q1 results driven by House of Cards and views Q2 expectations as reasonable. The firm rates shares an Equal Weight and raised its price target to $190 from $120.

After Pier 1 reported in-line Q4 results and provided lower than expected FY14 EPS guidance, Wells Fargo doesn't believe that the company has factored in the positive impact on sales of the company's e-commerce and SG&A investments. The firm keeps an Outperform rating on the shares.

GOOG Google ad spend looks to be in line for the quarter, says Goldman

Goldman's checks indicate Google's ad spend is roughly in-line for the quarter and is forecasting standalone revenue of $13.29B vs. consensus of $12.95B. The analyst continues to expect margins to be pressured by increasing percentage of mobile queries combined with smartphone and tablet offerings. Shares are Neutral rated with a $760 price target.

Piper Jaffray said its channel checks indicate the supply/demand dynamics for glyphosate herbicide remain very tight. The firm views the checks as incremental positives for Monsanto and reiterates an Overweight rating on the stock with a $133 price target.

CERN Cerner price target raised to $110 from $97 at Jefferies

Jefferies believes Cerner's investments are driving competitive inroads and raised its price target for shares while keeping a Buy rating on the stock.

MA MasterCard downgraded to Neutral from Buy at Sterne Agee

Wunderlich believes LinkedIn's acquisition of Pulse makes great strategic sense as it will accelerate the company's efforts to become a large publishing platform and expand the capabilities of its mobile applications. The firm reiterates a Buy rating on LinkedIn shares with a $195 price target.

KORS Michael Kors initiated with an Underperform at CLSA

CLSA believes Michael Kors shares are priced for perfection and for the company to approach saturation in North America over the next four years. Price target is $60

MSFT Microsoft downgraded to Outperform from Buy at CLSA

CLSA downgraded Microsoft due to a continued deterioration in the PC market and recent share strength. Price target lowered to $34 from $36. Note that shares were downgraded at three firms yesterday.

YHOO Yahoo price target raised to $26 from $22 at JPMorgan

JPMorgan raised its price target for Yahoo citing improving engagement trends and a higher implied valuation for Alibaba Group. However, the firm keeps a Neutral rating on the stock pending greater improvement in Yahoo's core business

Will be placing some small lotto trades on weeklies expiring today. May possibly look to grab some lotto CMG $320 puts if it shows some weakness at the open. Will be watching PCLN and GOOG as well. Have calls already but may look for more.

Some of those expire today so very risky. Lets have a great end to the trading week!

With all the fun action in the market recently, figured I would do a quick Q and A and show folks how i come up with my Watch List. This will be for Silver and above, and will only do it if we get at least 30 folks registered(shouldnt be a problem).

What a rally yesterday as the market ramped all day and closed at all-time highs. Simply amazing! I said it on the audio in chat yesterday, but felt like yesterday was the day all the bears started to throw in the towel, and those on the sidelines finally gave up watching and waiting and said GET ME IN! Jobless claims  fell 42k last week which was more then expected, easing some concerns of the data last week.

BBBY reported earnings yesterday and the stock is up a few % this morning. Numbers were decent and I think the stock moves a bit higher here, but may struggled to break $70. NFLX price target was raised by GS this morning but rating remained neutral. The stock is moving up PM on that news and could go one 170.50 break. AAPL is slightly red and GOOG is gapping so maybe another nice day for both.

After watching PCLN break over 700 in the morning yesterday, told myself I would be a buyer over $710. It broke and I bought the 730 calls. Will look for continuation today. Also still have CMG calls that have been up huge this week. SFLY and SODA, two text alerts this month are finally doing well. The SFLY calls hit .75 yesterday from .30 entry. The SODA 55 Calls closed at .30, which is the entry price. Hoping for more big days from those two.

A boring morning with analyst changes, here are the ones of note:

Baird remains confident in the long term strategy of Advance Auto Parts and calls its a top value idea. The firm cited the company's reiteration of its financial guidance, its commitment to the commercial sector, and the potential form improved margins. Shares are Outperform rated with a $90 price target.

Following Calpine's investor day, Morgan Stanley continues to believe its cash and cash flow returns are underappreciated by investors. The firm believes Street estimates are too low and do not reflect forward power prices. Shares are Outperform rated.

TOL Toll Brothers upgraded to Neutral from Negative at Susquehanna

As previously reported, Susquehanna upgraded Toll Brothers due to valuation. The firm upgraded shares due to increasing land prices and relative underperformance. Price target raised to $33 from $25.

TD Securities downgraded Barrick Gold after the company announced that it is suspending construction work on the Chilean side of the Pascua-Lama project while working to address environmental and other regulatory requirements.

RBC Capital increased its target on First Solar after the company provided stronger than expected 2013 guidance. The firm views the company's 2014 and 2015 guidance as encouraging but maintains a Sector Perform rating on the shares.

Holding quite a few positions already so the watchlist is small today. Will look to add more PCLN if it looks good at the open. Also like GOOG for continuation of the bounce and may try for 805s.

Lets have a great day folks! Sometime years from now you will all remember where you were when the market hit all-time highs! (LOL)