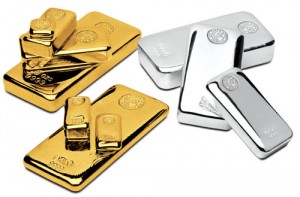 We wrote about the impending collapse in Gold and Silver back in the spring when Gold was treading water around $1400. Although it did collapse in June to $1180, the metal found some bidders and headed back above $1400 in August. Over the past month and a half, Gold has battled to stay above $1320 despite continued positive catalysts for an upward move. Reading the headlines, it would be hard for one to figure out what is really moving Gold. If the US dollar is stronger and Gold is down, the talking heads will use that reasoning. If the US dollar is weaker and Gold is down, they will find some other data point or rationale such as 'Taper Worries" or "Market Fears'. Today is the best example to-date on what is wrong with Gold. Weekly Jobless claim numbers leaped over 60,000 and came in above estimates, a 6 month high. That number should put a bid in Gold as folks consider the ramifications to a possible taper in November or December. A number like this in June or July would have Gold futures up 1-2%, instead they popped initially, then profit takers came in and took Gold red. To me it seems the Gold trade is out of favor. Inflation hedge, Fear hedge, US dollar hedge? Does not look like it right now. We like Gold to break under $1280 in short order and look to retest the June lows of $1180 in the coming weeks. 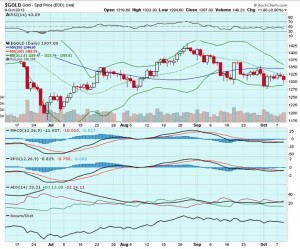