The correlation between the current pull back and financials is no coincidence.  Financials have under performed since the rally off the lows in February. 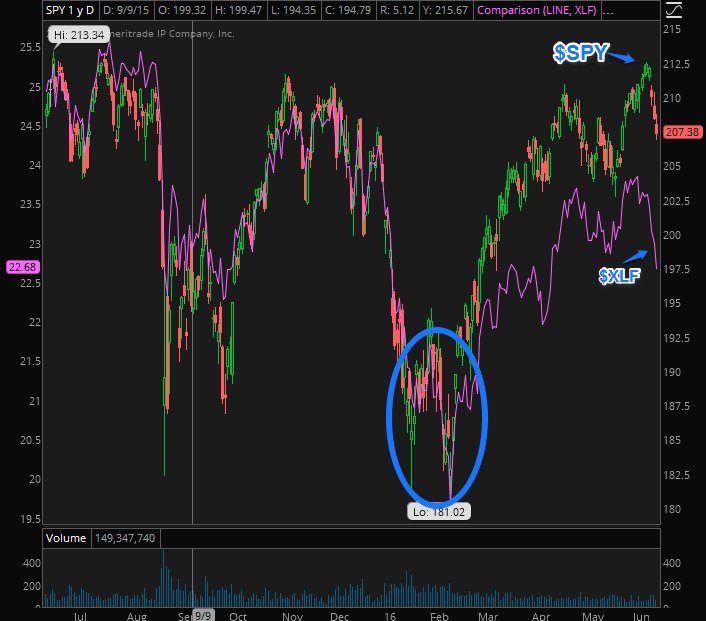 This market will not find a bottom until the selling in the financial sector stops.  Yesterday it was the credit card companies getting crushed:

Storm clouds are gathering on the consumer-credit horizon.

Lenders and ratings firms are sounding alarms over weakening performance of three major areas of consumer credit -- credit cards, auto loans and student loans -- suggesting that a new round of borrower delinquencies and losses for financial institutions could be on the way.

Synchrony Financial, the largest retail-store card issuer by purchase volume and balances, on Tuesday increased its forecast for losses over the next 12 months and said it was building up reserves for future losses, according to a company filing. The lender said it expected net charge-off rates over that period to increase by 0.20 to 0.30 percentage points.

That sent tremors through a variety of financial stocks with exposure to the consumer. While Synchrony's stock was down about 12% by midday Tuesday, Capital One Financial Corp. fell about 6% and Ally Financial Inc. was down nearly 4%.

In detailing the company's changed outlook at a Morgan Stanley financial-services conference Tuesday, Brian Doubles, Synchrony chief financial officer, cited challenges in late-stage delinquencies as the main reason. "We expected to see some softening," he said. "We weren't sure when it was going to come and I think we're starting to see some of that."

Mr. Doubles added that the ability of card holders to get back on track with payments after falling behind has been "challenged all year."

The ramifications of these 'tremors' are not positive for the stock market.  What would happen if interest rates were to rise?

Exactly.  Which is why the FED will not raise rates again anytime soon.  Which brings us to todays FED announcement.

What will the market reaction be?   There will be no surprises  Expectations of a rate hike have effectively dropped to zero recently.  The announcement will be looked at closely for any changes that push rate hike expectations further out.  After the recent bout of selling in the market, I think we could see a sharp rally to the upside.  With the financials recovering some of their recent losses.

Short term momentum could be heading back up, with moving averages curling back over.  A rally into weeks end could bring prices right back to where they started the week at..... which is exactly what happened last week.

The VIX closed yesterdays session over the 20 level.  Watch the action today, if it breaks and holds under 20 this would be further confirmation that the recent sell-off has reached, at least a short term, turning point.