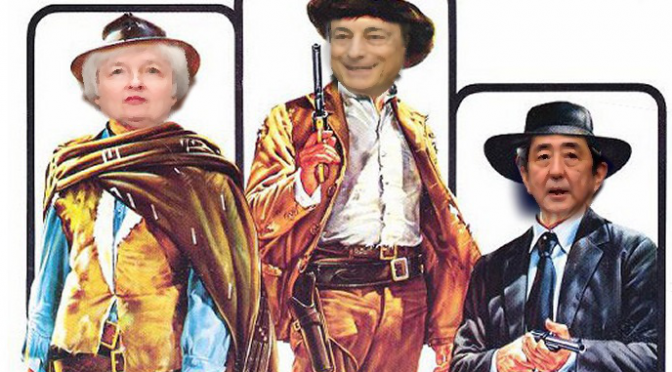 S&P 500 futures are flat an hour before the opening bell on this Thursday July 21st, 2016.  Momentum for the market remains up.

Brexit, just like Grexit before it, has helped launch the S&P500 to new all time record highs.

This morning the ECB announced they are going to continue doing what they are doing.  Buying $80 billion of assets and keeping rates at historic levels.

Central Banks, with the stock market at record highs, continue upping the ante on their asset price manipulation schemes.  The ECB has now entered the junk bond market via its recently launched corporate bond buying plan, which is great for those junk rated corporations and not so great for those who continue to search for a return in this market.

That return is found in the stock market where some called a positive yield still exists.  Of course you will be paying for it, via the purchase of a stock that is likely already at or will soon be at new all time record highs.  Just squeeze your nose and buy.

The relentless bid in this market and the lack of volatility all stem from a World where those with unlimited credit cards are gaming the markets in a game that can't be lost.

At this stage the risk seems more of a massive overshoot than a complete collapse of the markets.  Meaning a parabolic buying frenzy the likes we have never seen before.

That parabolic rise may provide that final top so many have been calling for over the last 7+ years.

I did not anticipate such a strong rally off the Brexit lows.  But much like my trepidation back in 2009 and early 2010 about the market, I came around to the notion that Central Banks and the Stock Market are husband and wife, bonded together with the understanding that prices will rise until 'death do they part'.

If you watch the daily gyrations of the market, especially the last few weeks, you can see the intra-day action is just a song and dance... a prelude before another move higher.  Any selling pressure relents.  And every excuse to sell is just another reason to buy.

As Long as These Sell Offs Have Names

As it stands now, small caps and tech are catching up to the S&P500.  $IWM has cleared the key $120 figure.  $QQQ is nearing $115.  The VIX remains subdued, and we could see another 10 handle, or even a break into single digits before we get any type of meaningful pull back.

Momentum remains to the upside, and until that changes, either hold your nose and buy or go to the beach.