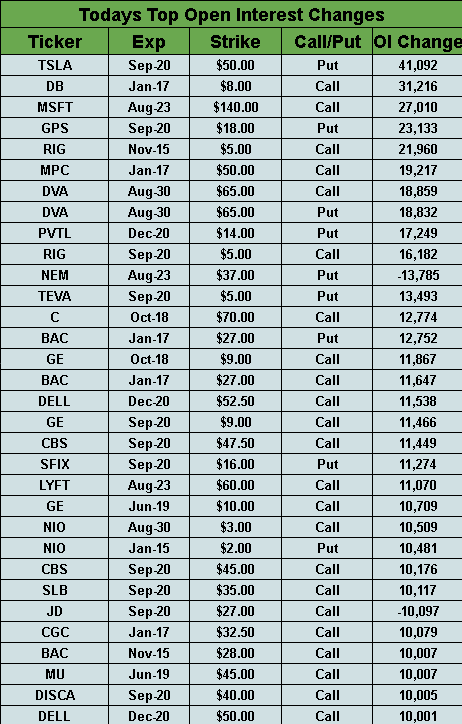 There's a lot going for stocks this morning ahead of a week that's light on data and heavy on monetary policy, including FOMC minutes and the Fed's annual policy symposium at Jackson Hole. U.S. equity index futures rose about 1% after President Trump further ignited sentiment by saying his team is "doing very well with China, and talking!" while stating Apple CEO Tim Cook made a "good case" against Chinese tariffs (see below). Add in some stimulus hopes, with the PBOC unveiling key interest rate reforms to help steer borrowing costs lower for companies, as well as reports of new fiscal stimulus in Germany.
Go deeper: The Heisenberg breaks down what is at stake this week.

Following a weekend dinner with Tim Cook, President Trump said the CEO made a "good case" that it would be difficult for Apple (NASDAQ:AAPL) to pay tariffs, when Samsung (OTC:SSNLF) does not face the same hurdle because much of its manufacturing is in South Korea. "I thought he made a very compelling argument, so I'm thinking about it," he told reporters. Apple's MacBook laptops and iPhones won't face additional tariffs until Dec. 15, but some of the company's other products, including its AirPods, Apple Watch and HomePod, will be subject to the levies on Sept. 1.
Go deeper: 'Apple Is No Longer An iPhone Company' writes Erich Reimer.

Amazon (NASDAQ:AMZN) is raising seller fees by 3% for thousands of small and medium-sized businesses in France because of a new digital tax approved by the French government, which aims to level the playing field between Big Tech and local companies. The precedent-setting levy, described by the U.S. Trade Representative's Office as "unreasonable," was passed by the French State in July. Stay tuned as executives from Amazon, Facebook (NASDAQ:FB) and Google (GOOG, GOOGL) testify later today at a U.S. government hearing on the digital tax.
Go deeper: Will French online sellers TURN TO ALTERNATIVES like Etsy (NASDAQ:ETSY) and eBay (NASDAQ:EBAY)?

Germany could muster €50B of extra spending in an economic crisis, according to Finance Minister Olaf Scholz, putting a number on a possible fiscal stimulus for the first time. While action isn't imminent, he signaled that domestic and global warning signs are increasing pressure on Angela Merkel's government to consider suspending its balanced-budget policy. They include an economy that contracted in the second quarter and the risk of expanded trade conflict with the U.S.

"This week, British Prime Minister Boris Johnson will travel to Germany and France to insist to Emmanuel Macron, the French president, and Angela Merkel, the German chancellor, that Parliament cannot stop Brexit," according to The Sunday Telegraph. "Johnson is expected to tell them that they have two months to agree a deal acceptable to the cabinet and parliament, without which the U.K. will exit without an agreement on Halloween." Sterling -0.2% to $1.2121.

What's next for Hong Kong?

The city is gearing up for more protests this week after hundreds of thousands of anti-government demonstrators braved heavy rain to rally peacefully on Sunday, marking a change to what have often been violent clashes. The scenes showed that the movement is far from fizzling out, triggering fears about retail, tourism and business confidence, as well as worries over the territory's stock and property markets. The Hang Seng index still rose 2.2% overnight following a healthy lead from Wall Street and key interest rate reforms from the PBOC.
Go deeper: ISHARES MSCI HONG KONG ETF (NYSEARCA:EWH) is up 2.2%premarket.

President Trump on Sunday said he doesn't want to do business with China's Huawei after weekend reports suggested the administration was planning to extend a reprieve that allows it to buy parts from U.S. companies. "I don't want to do business at all because it is a national security threat," he told reporters. "We'll see what happens. I'm making a decision tomorrow." Out of $70B that Huawei spent buying components in 2018, some $11B went to U.S. firms including Qualcomm (NASDAQ:QCOM), Intel (NASDAQ:INTC) and Micron Technology (NASDAQ:MU).

SoftBank (OTCPK:SFTBY) plans to lend up to $20B to its employees to buy stakes in its second $38B giant venture-capital fund, WSJ reports, saying loans will carry interest rates of about 5%. Note that SoftBank did the same thing for its first $100B Vision Fund that launched in 2017, though that only included about $8B of employee money. While it's an unusually close relationship, executives believe this will make employees more accountable because fund investments "can be canceled if a manager leaves or is found to have done a reckless deal."
Go deeper: Growth metrics of SoftBank.

Airbnb (AIRB) is readying a listing for the first half of 2020, according to the WSJ, which also disclosed several of the home-sharing group's financials. Strong first quarter performance got a boost from the 91M nights reserved on the platform, which amounted to $9.4B in total bookings, up 31% from the same period the year before. It also had about $3.5B in cash on its balance sheet as of March 31 and reported a 40% revenue growth rate in 2018 compared with the previous year. Airbnb hasn't yet decided if it will pursue a traditional IPO or if it will follow the unconventional path of Spotify (NYSE:SPOT) and Slack (NYSE:WORK) to a direct listing.

Investors are watching a big week for Italy.