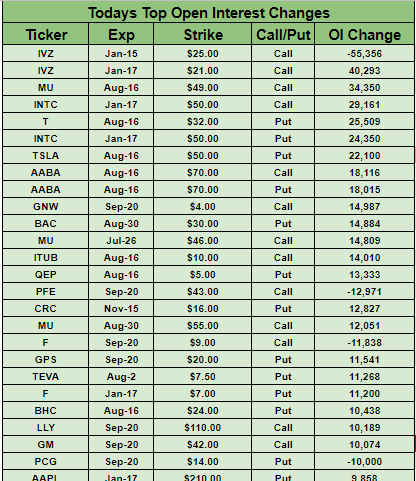 As Fed members go into their "blackout" period, U.S. stock index futures are inching up 0.2%, with rate bettors only relying on economic data for the next 10 days before a crucial FOMC meeting on July 30-31. Earnings will still be a catalyst for market movement this week, with a big run of quarterly results led by tech companies and industrial names. Set to report are Amazon (NASDAQ:AMZN), Google (GOOG, GOOGL) and Facebook (NASDAQ:FB), as well as Boeing (NYSE:BA), Caterpillar (NYSE:CAT), United Technologies (NYSE:UTX) and Lockheed Martin (NYSE:LMT).

The Lion King became Disney's (NYSE:DIS) fifth blockbuster of 2019 over the weekend, with the digital remake grossing an eye-popping $185M at the domestic box office, and collecting $531M so far (after opening early in China). Another record on Sunday saw Marvel's Avengers: Endgame become the highest-grossing film of all time, topping 2009's Avatar with $2.79B. Great purchase? Disney has earned more than $18.2B at the global box office from Marvel movies since buying the company in 2009.

Shares rocketed as much as 520% on China's new Nasdaq-style board that debuted Monday, with the first batch of 25 companies seeing major gains. The Science and Technology Innovation Board, or "STAR Market," is a pet project of President Xi and part of Beijing's effort to revitalize a slowing economy and sharpen its edge in the fight for global tech dominance. Firms going public on the new STAR bourse merely need registration, compared to the regulatory approval needed to list on the Shanghai A-share market.

Crude futures climbed 2% overnight to over $57/bbl after oil spiked late Friday on news that Iran had seized a British oil tanker in the Strait of Hormuz. The British government threatened Tehran with "serious consequences" and advised U.K. ships to avoid the area, but ministers on Sunday sought to dial down the rhetoric. Adding to the disruptions, Libya's national oil company suspended operations at the country's largest oil field over the "unlawful" closure of a pipeline valve.

Grappling with the aftermath of a June explosion and fire at its oil refinery, Philadelphia Energy Solutions has filed for bankruptcy protection again. It's the company's second trip to bankruptcy court in less than two years, after emerging from Chapter 11 in August 2018. The East Coast's largest oil refiner said in June that it was dismissing more than 1,000 workers and shutting its plant, which could process 335,000 barrels of crude oil a day.

The day before Boris Johnson is likely named U.K. prime minister, a high-profile exit from the government is already in the cards: Chancellor of the Exchequer Philip Hammond. Justice Secretary David Gauke is also threatening to leave, and a slew of more junior ministers are expected to go as well. With Johnson becoming prime minister, the risks of a no-deal Brexit will rise to an all-time high. Even if the U.K. parliament votes against the maneuver this week, it will still happen unless the EU and the U.K. agree another delay come Oct. 31.

Next challenge for J&J

Facing thousands of lawsuits over the safety of its signature baby powder, Johnson & Johnson (NYSE:JNJ) will make a high-stakes attempt to head off future losses in a courtroom battle beginning today at a hearing that will determine whether federal lawsuits against the company will proceed to trial. More than two dozen suits have already gone to trial in state courts, some resulting in major plaintiffs' wins. That includes a July 2018 verdict by a St. Louis jury requiring J&J to pay $4.69B to 22 women and their families who blamed ovarian-cancer diagnoses on baby powder.

Equifax (NYSE:EFX) is nearing an agreement to pay $700M to settle privacy claims stemming from a 2017 breach that exposed Social Security numbers and other sensitive personal information affecting nearly 150M people, WSJreports. The payments would go to the Federal Trade Commission, the Consumer Financial Protection Bureau and most state attorneys general, and resolve a nationwide consumer class action lawsuit. The hack forced big changes at Equifax, leading to the resignation of its long-serving CEO, and prompting intense scrutiny from lawmakers.

White House economic adviser Larry Kudlow will host a meeting with semiconductor and software executives today to discuss the U.S. ban on sales to China's Huawei, according to multiple sources. Treasury Secretary Steven Mnuchin will also attend the White House event, to which chipmakers Intel (NASDAQ:INTC), Qualcomm (NASDAQ:QCOM) and Micron Technology (NASDAQ:MU) have been invited. Some $11B went to the three companies and other U.S. firms in 2018, out of $70B that Huawei spent buying components.