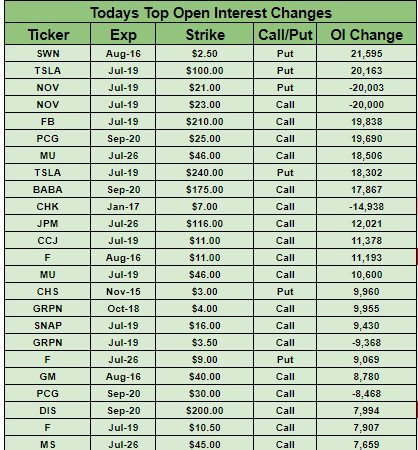 Weakened by trade tensions with the U.S., China's economic growth decelerated in the second quarter to its slowest pace since 1992, growing by 6.2% and prompting expectations of more stimulus. The data was weighed down by an impasse in negotiations that shattered hopes for a trade deal in late May, though President Trump and Xi Jinping got discussions back on track by the end of June. Separate economic figures handily topped forecasts as the country’s industrial output grew 6.3% in June from a year earlier, while retail sales surged 9.8%. The Shanghai Composite closed up 0.4% following the news.

Big banks start reporting Q2 earnings today and investors will be closely watching for signs of how much the Fed’s change in rate policy could hurt the banking business. The rate curve has also been flattening, making it harder for lenders to drive profit through the difference between long- and short-term interest rates. Ahead of the results, U.S. stock index futures are pausing for breath following a record-setting performance on Wall Street last week.

What to expect from earnings season?

Along with the banks, several major tech names like Netflix (NASDAQ:NFLX) and Microsoft (NASDAQ:MSFT) will deliver quarterly stats this week, setting the tone for the rest of Q2 earnings season. Consensus analysts expect an about 1% year-over-year decline in aggregate earnings per share for the second quarter, amid deteriorating economic indicators. It's good to note that Wall Street analysts were similarly despondent heading into the Q1 earnings season, but companies ultimately outperformed.

Shoppers will be clicking away over the next 48 hours as Amazon (NASDAQ:AMZN) extends Prime Day to a two-day event, while Target (NYSE:TGT), Walmart (NYSE:WMT) and eBay (NASDAQ:EBAY) capitalize on the online traffic with sales of their own. Amazon, which sold over 100M products over Prime Day 2018, did not give sales totals in dollars and likely won’t this year, though IgnitionOne estimates the retail giant will generate sales of $6.1B (a $2B improvement over last year). That's one reason for Amazon's surging share price, which climbed over 460% in the last five years by outpacing retail rivals.

American Airlines (NASDAQ:AAL) has extended Boeing (NYSE:BA) 737 MAX cancellations for the fourth time, but "remains confident that impending software updates, along with the new training elements, will lead to recertification of the aircraft this year." That's despite being the next MAX operator to extend cancellations into early November. Based on a history of previous delays and unexpected technical challenges, other analysts and officials see a January 2020 timeline as more realistic. BA -1.2% premarket.

Hurricane Barry made landfall in Louisiana as a Category 1 storm on Saturday before being downgraded to a tropical storm. Some 1.3M bbl/day, or 70%, of oil production and 1.5B cf/day, or 55%, of natural gas output in the Gulf of Mexico was shut-in, with total southeast natural gas production falling to its lowest level of the year, according to the U.S. Bureau of Safety and Environmental Enforcement. Barry is still on course to run directly into the Louisiana portion of the Haynesville Shale, where flooding could lead to a temporary decline in production.

Disney's (NYSE:DIS) The Lion King hauled in $54.7M during its China debut, higher than the openings of Jungle Book, Beauty and the Beast and Aladdin. The strong opening abroad is a good sign for Disney as critics had mixed feelings ahead of the film's North American debut on July 19. Even if the film does underperform its estimated $175M-$200M opening weekend, expectations are that the film will have a long run in theaters this summer and into the fall.

The U.S. may approve licenses for companies to re-start new sales to Huawei in as little as two weeks, according to Commerce Secretary Wilbur Ross. It's a sign President Trump's recent effort to ease restrictions on the Chinese telecom equipment supplier could move forward quickly amid chip industry lobbying, coupled with Chinese political pressure. Out of $70B that Huawei spent buying components in 2018, some $11B went to U.S. firms including Qualcomm (NASDAQ:QCOM), Intel (NASDAQ:INTC) and Micron Technology (NASDAQ:MU).

The Trump administration late Friday issued final rules to freeze a 2016 Obama-era regulation that more than doubled penalties for automakers failing to meet fuel efficiency requirements. Congress in 2015 ordered federal agencies to adjust a wide range of civil penalties to account for inflation and, in response, the NHTSA issued rules to eventually raise fines to $14 from $5.50 for every 0.1 mile per gallon of fuel that new cars and trucks consume in excess of the required standards. Automakers, including General Motors (NYSE:GM), Volkswagen (OTCPK:VWAGY), Toyota (NYSE:TM), Fiat Chrysler (NYSE:FCAU) and others protested the hike, saying it could increase industry compliance costs by $1B annually.

A chunk of New York City plunged into darkness Saturday evening as 73,000 customers on Manhattan's West Side, as well as subways, stores and Broadway theaters, lost power. While the city’s main utility, Con Edison (NYSE:ED), restored electricity within hours, Governor Andrew Cuomo ordered an investigation into the incident, saying he would hold "all parties accountable." No deaths or injuries were reported due to the outage, which occurred 42 years to the day from a major 1977 blackout that sparked looting and rioting across NYC.

Gilead Sciences (NASDAQ:GILD) to boost Galapagos stake in $5.1B deal.