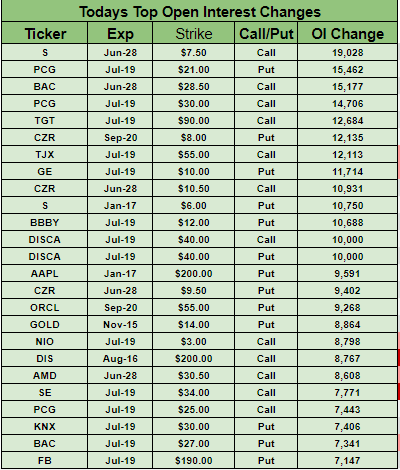 U.S. equity index futures are pointing to gains of 0.3% at the open, meaning the DJIA will only need to gain another 70 points during today's session to top its record close of 26,828 posted last October. While investors continue to bet on central bank support and a breakthrough in U.S.-China trade talks at this week's G20 summit, a profit warning from Daimler overnight weighed on European equities, with the Euro Stoxx 50 off by 0.3%. Meanwhile, crude topped $58/bbl as the U.S. prepared to announce "major additional sanctions on Iran," while gold resumed its rally, pushing further past $1,400.

The S&P 500 is up 18% YTD and powering toward its biggest first half since 1997. For bulls, the next question is "how long until Dow 30,000?" writes Jack Hough in Barron's. "U.S. stocks trade at 17 times forward earnings estimates, about where they were in early 2017. Assuming they hold that valuation, the earnings outlook implies potential for yearly gains of 5% or so from here. Where does that leave us on the Dow? So long as we can agree that precise targets are folly, we’ll drop our [previous] date [of 2025] but stick with our 4% to 5% yearly return. From here, that means 30,000 by the end of 2021."

Along with the truly bizarre state of global interest rates, the rebounding crypto market is shaping up to be the largest finance-related story of 2019. On watch Thursday and Friday for re-crossing the $10K threshold, Bitcoin (BTC-USD) over the weekend not only blew through that level, but took out $11K as well, nearly tripling in price YTD. Alongside, Ether (ETH-USD) crossed over $300 for the first time in about a year. Others rallying include Litecoin (LTC-USD), Ripple (XRP-USD), and Bitcoin Cash (BCH-USD).

Cutting its profit forecast for the third time in a year, Daimler (OTCPK:DDAIF) warned investors that Q2 earnings will take a "high three-digit-million" hit due to higher-than-anticipated financial fallout of alleged diesel emissions manipulation. Shares fell the most in over four months on the news, sliding as much as 3.9% in Frankfurt. The profit warning comes at a highly politically sensitive moment, with new Daimler CEO Ola Källenius meeting Chancellor Angela Merkel in Berlin to discuss the future of the German car industry and the transition to electric vehicles.

How much is your data worth?

Two senators from opposing sides of the aisle will introduce legislation today to call on tech giants to disclose the value of their users' data, Axios reports. Sens. Mark Warner and Josh Hawley will bring forward the DASHBOARD act (Designing Accounting Safeguards to Help Broaden Oversight and Regulations on Data), calling on major platforms like Facebook (NASDAQ:FB), Google (GOOG, GOOGL), Amazon (NASDAQ:AMZN) and Twitter (NYSE:TWTR) to disclose to users the types of data collected, how it is used, and to provide an assessment of the value of that data once every 90 days.

The Trump administration is examining whether to require that next-generation 5G cellular equipment used in the U.S. be designed and manufactured outside China, WSJ reports. The proposals could force telecom equipment giants Ericsson (NASDAQ:ERIC) and Nokia (NYSE:NOK) to reshuffle their production locations, with Citi analysts estimating that China represented 45% and 10% of their manufacturing-facility area in 2018. Washington has already essentially banned telecom equipment from Chinese companies, especially industry leader Huawei, over cybersecurity concerns.

With possible consequences hanging over FedEx's (NYSE:FDX) misdirected mail case, the package delivery firm apologized and said an "operational error" caused a Huawei phone not be delivered to the U.S. earlier this month. While China previously launched an investigation into the case, state news agency Xinhua said last week it shouldn't be seen as retaliation amid worsening trade relations between Beijing and Washington. China's foreign ministry is now calling for a "proper explanation."

San Francisco is expected to become the first city in the U.S. to ban e-cigarettes this week, a move that will likely pit the city against one of its fastest-growing startups: Juul Labs (JUUL). The ban won't be permanent, however, and will ultimately depend on an FDA assessment on the health risks of e-cigarettes, which is likely to begin in 2022 after manufacturers submit their products for a health review. San Francisco's decision won't affect the sale of cigarettes, which will remain legal.

It's official! U.S. casino operator Eldorado Resorts (NASDAQ:ERI) has agreed to merge with Caesars Entertainment (NASDAQ:CZR) in a cash and stock deal that values its peer at $12.75 per share, or about $17.3B including debt. The combined company’s ownership would be split roughly between Eldorado and Caesars shareholders, and follows reports that activist shareholder Carl Icahn looked more eager to sell than Caesars' board. The tie-up creates a more serious competitor to larger casino industry players, such as Las Vegas Sands (NYSE:LVS), Wynn Resorts (NASDAQ:WYNN) and MGM Resorts (NYSE:MGM). CZR +16.6% premarket.

A vote by Nissan (OTCPK:NSANY) shareholders this week on a plan to make radical changes to the Japanese company's board could pave the way for Fiat Chrysler (NYSE:FCAU) and Renault (OTCPK:RNLSY) to resume their $40B merger talks. Nissan will have a majority of independent directors who, the thinking inside Renault goes, could potentially be more willing to examine a tie-up on strategic merits, WSJ reports. Fiat withdrew its offer for Renault earlier this month after the French government sought more time to ensure that Renault's longtime alliance partner Nissan was on board with the deal.