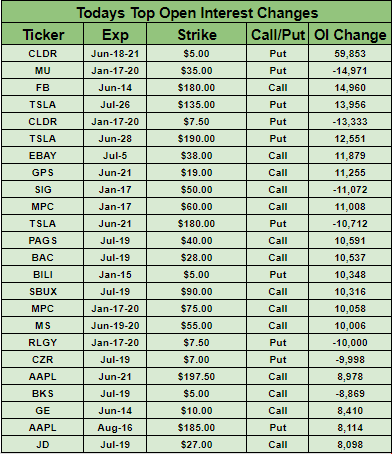 United Technologies and Raytheon have agreed to an all-stock merger, creating the second-largest defense-and-aerospace company in the U.S. after Boeing (NYSE:BA) with combined annual sales of around $74B. The deal won't include United Tech's (NYSE:UTX) elevator (Otis) and air conditioning units (Carrier), which it plans to spin off in 2020. Raytheon's (NYSE:RTN) Tom Kennedy will become executive chairman of the combined company, to be called Raytheon Technologies, while UTX's Greg Hayes will be named CEO. Two years after the deal closes, Hayes will assume the role of chairman and CEO. RTN +2.8%; UTX +4.4% premarket.

President Trump's decision to suspend planned tariffs against Mexico is driving a 0.4% advance for U.S. equity futures ahead of the open, while the peso rose 2% overnight to 19.2285 on the dollar. Stock gains were capped, however, as uncertainty remained if Mexico will enforce the deal that intends to stem the flow of illegal Central American migrants into the U.S. On Friday, the Dow closed 263 points higher at 25,984 to post its best week since November on hopes that the Fed would move to slash interest rates (nonfarm payrolls came in at just 75,000 in May, far below the consensus forecast of 180,000).

The Bank of Japan could deliver more big monetary stimulus if necessary, but needs to take care with its side effects on the financial system, according to Governor Haruhiko Kuroda. The comments come after Fed Chair Jerome Powell signaled a willingness to act if the economy needs it, ECB President Mario Draghi vowed to support growth and PBOC Governor Yi Gang said that he has "tremendous" policy options to stoke demand. While it doesn't need to act now, the BOJ's options would be cutting the -0.1% negative rate further, lowering the target for 10-year yields, increasing the monetary base, or boosting asset purchases.

Figures overnight showed GDP in the United Kingdom fell by 0.4% in April, pushing the pound down 0.3% to below $1.27 and increasing concerns about the health of the economy. The Office for National Statistics pointed to a "dramatic fall" in car production due to planned shutdowns put in place around the original Brexit deadline of March 29. Along with broader manufacturing weakness, stockpiling faded as the date of Britain's departure from the EU was pushed back again to October 31.

Rift appears to be worsening

Exposing the deepening strain between Renault (OTCPK:RNLSY) and Nissan (OTCPK:NSANY), the French carmaker has signaled it will block its Japanese alliance partner from adopting planned governance reforms unless the company gets a seat on new board committees. It comes amid reports that the revival of the collapsed Fiat Chrysler-Renault deal hinges on a reduced stake in Nissan. Meanwhile, Fiat (NYSE:FCAU) is joining forces with Amazon (NASDAQ:AMZN)-backed driverless startup Aurora, a move that could align its strategy with Renault on innovations like EVs and self-driving cars if it's able to get the merger over the line.

G20 finance ministers agreed to close corporate tax loopholes used by global tech giants like Facebook (NASDAQ:FB), Google (GOOG, GOOGL) and Amazon (AMZN) "by 2020," according to a final communique issued after their weekend meeting in Fukuoka, Japan. Combating lower-tax jurisdictions, the U.K. and France are already bringing in digital services taxes based on the local sales of search engines and digital marketplaces, but because they target sales and not profits, there is a risk of double taxation. While both have vowed to scrap their digital taxes as soon as there was an agreed G20 approach, there are also big differences to resolve with the U.S.

Known as "Project Scarlett," Microsoft (NASDAQ:MSFT) has unveiled its next-generation Xbox console, which is set to hit store shelves during the 2020 holiday season. The device will be four times more powerful than the Xbox One X and be powered by an Advanced Micro Devices (NASDAQ:AMD) chip, the company announced during its Xbox E3 conference in Los Angeles. Microsoft also said it will begin publicly testing its new "Project xCloud" videogame-streaming initiative in October, just ahead of when Google's (GOOG, GOOGL) Stadia competing service is slated to launch.

Two of Europe's biggest tech titans, Nokia (NYSE:NOK) and Ericsson (NASDAQ:ERIC), have started drawing up emergency plans to move some of their most sensitive operations out of China and split up their supply chains to counter increasing national security concerns, sources told The Sunday Telegraph. The drastic steps would include changes to their corporate structures, including setting up separate units in the Eastern and Western Hemispheres, in a bid to protect themselves against the escalating global trade war. Both companies make equipment used to run 5G networks.

It doesn't stop there. The Chinese government summoned major technology companies last week, including notable semiconductor firms, according to a new report from the NYT. The purpose was to warn them that they will face repercussions if they respond too aggressively to U.S. trade restrictions that ban sales of American technology to Chinese companies. Among the firms called in were chipmakers Intel (NASDAQ:INTC), Qualcomm (NASDAQ:QCOM), ARM Holdings (OTCPK:ARMHF) and SK Hynix (OTC:HXSCF), as well as Microsoft (MSFT), Samsung Electronics (OTC:SSNLF), Dell Technologies (NYSE:DELL), Nokia (NOK) and Cisco Systems (NASDAQ:CSCO).

Contributor Vitaliy Katsenelson writes a 'Letter To A Young Investor.'

Yuan slips to lowest levels of 2019 after China trade data.

One year into AT&T's (NYSE:T) WarnerMedia bet: How to get to 70M subscribers?