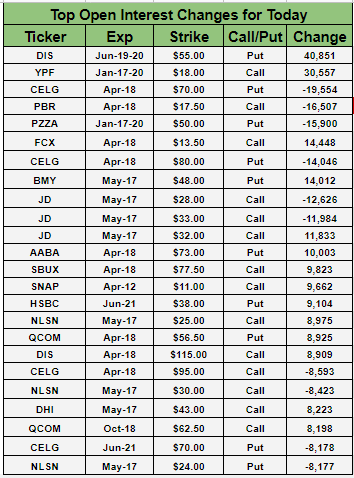 Better growth numbers from China are lifting investing sentiment across the globe as government stimulus measures appear to be taking hold in the world's second largest economy. The private Caixin/Markit Manufacturing PMI came in at 50.8 for March, while the official PMI rose to 50.5, returning back above the 50-mark that separates growth from contraction. Markets are rallying on the news, with Shanghai closing up 2.6%, Dow futures 191 points higher and Nasdaq futures ahead by 1%. High-level trade negotiations between China and the U.S. are also set to resume in Washington this week following last week's talks in Beijing.

Another day, another Brexit decision

U.K. lawmakers will hold another round of indicative votes tonight, attempting to come up with an alternative to Theresa May's Brexit plan, which has already been rejected three times. Chances of success appear minimal and none of the eight options on the table last week fetched a majority in parliament. Failure would leave the nation with two options: departing the EU in a little over a week without a deal or delaying Brexit further. There are also reports that May is considering taking her EU withdrawal bill back to parliament for a fourth time.

The U.S. is cutting off aid to El Salvador, Guatemala and Honduras, known collectively as the "Northern Triangle," after President Trump blasted the Central American countries for sending migrants to the U.S. A House Appropriations Committee aide estimated that around $700M of aid was affected. Trump has also threatened to close the U.S. border with Mexico this week, a move that could disrupt billions of dollars in trade.

Local elections in Turkey over the weekend saw President Erdogan’s alliance hold on to rural strongholds but lose Ankara and cities along the Mediterranean coast. The lira fell 1.5% vs. the dollar on the news amid concerns the government will double down on its populist policies. Turkish volatility, a central theme of 2018's stumble for emerging markets, resurfaced last week when lira funding rates rocketed to the highest in two decades.

As it prepares for its debut dollar bond offering, Saudi Aramco (ARMCO) was rated A1 at Moody's and A+ at Fitch - the fifth-highest investment grade level at both agencies. Proceeds from the sale, which could raise about $10B, will be used to help fund Aramco's purchase of a 70% stake in Saudi Basic Industries Corp. It's also a precursor to even greater transparency required for its IPO, planned for 2021. Aramco's 2018 net income came in at $111.1B, a figure equal to the annual profits of Apple (NASDAQ:AAPL), Google (GOOG, GOOGL) and Exxon Mobil (NYSE:XOM) combined.

The latest? Bloomberg said PSA Group (OTCPK:PEUGF) and Fiat Chrysler (NYSE:FCAU) have been holding preliminary discussions to collaborate on a "super platform" to reduce their investment costs across Europe, with any eventual deal likely to include sharing investments for new electric cars. "No single car manufacturer alone can afford the sheer size of investments needed to develop platforms for the kind of smart, hybrid and connected vehicles that will hit the road in coming years," said Carlo Alberto Carnevale Maffe, a professor at Bocconi University in Milan.

Grounding of the 737 MAX continues

Southwest Airlines (NYSE:LUV) is pulling its 34 Boeing (NYSE:BA) 737 MAX 8 jets from the company's flight schedules through the end of May, according to Reuters. An earlier timeline had the jets grounded until April 20. Norwegian Air CEO Bjoern Kjos is also traveling to Seattle today to visit Boeing and address 737 MAX problems. The carrier has 18 of the aircraft in its fleet and is scheduled to take delivery of dozens more in the coming months and years.

Johnson & Johnson's (NYSE:JNJ) baby shampoo samples failed quality tests conducted by the northwestern Indian state of Rajasthan, according to a public notice from the state's drugs watchdog. The samples contained "harmful ingredients" like formaldehyde, findings that were rejected by the U.S. drugmaker. It comes just a few months after Indian authorities completed an investigation into J&J’s Baby Powder, but found no asbestos in the product.

Kellogg (NYSE:K) is reportedly nearing a deal to sell its Keebler, Famous Amos and fruit snacks businesses to Nutella-owner Ferrero for between $1B-$1.5B. An announcement could come as soon as today. Ferrero beat out lead contender Hostess Brands (NASDAQ:TWNK), which had been looking to acquire the Keebler business through a Reverse Morris Trust (a structure that allows for a tax-efficient combination of two similarly sized companies).

CEO Mark Zuckerberg is calling for new global regulations governing the internet, recommending overarching rules on hateful and violent content, election integrity, privacy and data portability. "It's impossible to remove all harmful content from the internet, but when people use dozens of different sharing services - all with their own policies and processes - we need a more standardized approach." To remedy its "power over speech," Facebook (NASDAQ:FB) is also creating an independent body so users can appeal its decisions, and is currently working with governments to make sure its systems to review content are effective.

The market was stunned by the bond rally, but it has "higher to go," says contributor Avi Gilburt.