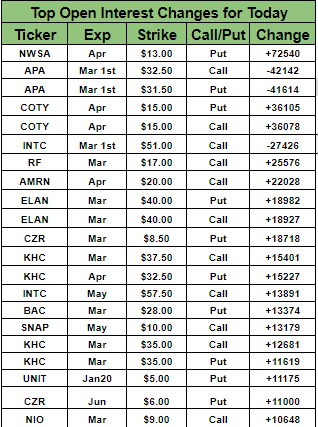 The Shanghai Composite surged 5.6% overnight, taking the index into bull market territory, after President Trump delayed an increase in tariffs scheduled for March 1. "The U.S. has made substantial progress in our trade talks with China," he wrote on Twitter. "Assuming both sides make additional progress, we will be planning a Summit for President Xi and myself, at Mar-a-Lago, to conclude an agreement." The trade optimism is lifting markets across the globe, with Europe ahead by 0.5% at midday and Dow futures flashing triple-digit gains.

Regulators in Britain and the U.S. are taking every step needed to ensure that trillions of dollars in derivatives contracts traded across the Atlantic will not be disrupted by any type of Brexit, according to Bank of England Governor Mark Carney. Meanwhile, Theresa May has pushed back a vote in parliament on her Brexit deal to as late as March 12, just 17 days before Britain is due to leave the European Union.

Can North Korea follow Vietnam to economic success? That's the question many are asking as President Trump heads to Hanoi this week for his second summit with Kim Jong-un. A series of reforms undertaken in the 1980s and 1990s paved the way for communist-controlled Vietnam to re-enter the global market and become one the region's fastest growing economies. "The miracle could be your miracle," Secretary of State Mike Pompeo said while visiting the country last July.

The U.S. is planning new ways to pressure Nicolas Maduro to give up power and other means to provide assistance to the economically devastated Venezuela. A weekend effort failed to deliver aid, with two people killed and at least 300 wounded. Vice President Mike Pence travels to the Colombian capital today to meet with members of a regional coalition and Venezuelan opposition leader Juan Guaido to discuss next steps.

California lawmakers have introduced legislation to phase out single-use non-recyclable plastic food containers and other packaging by 2030. If the legislation becomes law, some experts believe it could lead to other states taking similar steps. Last year, California became the first in the nation to restrict the use of plastic straws in restaurants, and the Golden State banned the use of single-use plastic bags at grocery stores in 2014. Related tickers: DWDP, LYB, XOM, E, CVX

After taking a small stake in Newmont Mining (NYSE:NEM), Barrick Gold (NYSE:GOLD) has made a proposal to merge in an all-share transaction. Each stockholder would receive 2.5694 Barrick shares per Newmont share. Barrick CEO Mark Bristow said the proposed merger would "unlock more than $7B net present value of real synergies, a major portion of which is generated by combining the two companies' highly complementary assets in Nevada." NEM +1.2% premarket.

Seeking to keep pace in gene therapy with rivals like Novartis (NYSE:NVS), Roche (OTCQX:RHHBY) is buying Spark Therapeutics (NASDAQ:ONCE) for $114.50 per share, or $4.3B, a premium of about 122% to Spark's closing price on Feb. 22. More M&A... French healthcare company Ipsen (OTCPK:IPSEY) has agreed to buy U.S. peer Clementia Pharmaceuticals (NASDAQ:CMTA) in a deal worth up to $1.31B, helping boost its portfolio of products treating rare diseases. ONCE +121%; CMTA +74% premarket.

Berkshire Hathaway paid too much for Kraft (NASDAQ:KHC), according to Warren Buffett, who noted he might have misjudged certain aspects about the company. The comments come after Berkshire (BRK.A, BRK.B) released its Q4 earnings and Buffett put out his annual letter saying he hoped to make an "elephant-size” purchase," but added that current prices are "sky-high." Meanwhile, Kraft is mulling its options for Maxwell House in a sale that could fetch at least $3B.

New testing by the WSJ showed that Facebook (NASDAQ:FB) software built into apps include an analytics tool called 'App Events' that allows developers to record their users' activity and report it back to the social giant, regardless of whether users log in via Facebook, or even have a profile. The apps, which collect information just seconds after users enter it, often send the data without any prominent or specific disclosure.

The Mobile World Congress has officially kicked off in Barcelona. Grabbing some attention are Huawei's foldable smartphone, called the Mate X, priced at about $2,600, as well as Sony's (NYSE:SNE) new flagship device, the cinematic Xperia 1, and a 5G dual-screen phone from LG (OTC:LGEAF). Microsoft (NASDAQ:MSFT) also unveiled the latest version of its HoloLens headset, promising more comfortability and immersive mixed reality experience.

Chipmakers are battling it out in the 5G arena, with Qualcomm (NASDAQ:QCOM) announcing 5G networking chips for a range of applications beyond smartphones, aiming to strengthen a business that lost Apple (NASDAQ:AAPL) as a major customer. Intel (NASDAQ:INTC) also showed off new chips and partnerships in the hoped of persuading investors about the billions of dollars it has poured into 5G networking technology.

"I have noticed President Trump's Twitter, he said that the U.S. needs faster and smarter 5G, or even 6G in the future, and he has realized that the U.S. is lagging behind in this respect. I think his message is clear and correct," Huawei Chairman Guo Ping said at the Mobile World Congress. Guo also called for equipment makers, network operators and governments to work together to devise trustworthy standards to manage cybersecurity risks.

More trouble in India? Amazon (NASDAQ:AMZN) and Walmart-owned Flipkart (NYSE:WMT) just restructured their Indian operations after the country modified its e-commerce regulations, but the latest reforms may spell further upheaval. India outlined a new draft policy for its burgeoning e-commerce sector on Saturday, focusing on data localization, improved privacy safeguards and measures to combat the sale of counterfeit products.

Investing giants BlackRock (NYSE:BLK) and KKR have signed a $4B agreement with the Abu Dhabi National Oil Company to become the first institutional investors to join forces with a national oil producer in the Middle East. The agreement forms a new entity that invests in midstream oil pipeline infrastructure, and marks ADNOC's latest step to diversify revenue sources and bring private capital into the company.

An escalating labor dispute at Southwest Airlines (NYSE:LUV) has led to daily out-of-service aircraft doubling, forcing the carrier to cancel hundreds of flights since Feb. 15. Now, CEO Gary Kelly says mechanics, who have been in labor contract talks for more than six years, deserve a new deal that makes them among the best paid in the airline industry, but Southwest needs "more supplier flexibility" in return.

Hanging on a ruling? According to defense lawyers, a decision by the Missouri Supreme Court on talc lawsuits could reduce the liability and number of large trials Johnson & Johnson (NYSE:JNJ) faces over allegations its products, including baby powder, cause cancer. Outside of St. Louis, the only other significant talc verdicts against J&J to date have come in lawsuits filed by individual plaintiffs in New Jersey and California.

Caesars Entertainment is in talks to offer Carl Icahn a role in selecting its new CEO as part of an agreement that would give the billionaire investor board seats, Reuters reports. The negotiations come after Icahn disclosed a 9.8% stake in Caesars (NASDAQ:CZR) on Tuesday. Icahn also asked the casino operator to launch a process to explore a sale, although Caesars said offers studied thus far undervalued it.

Switching to Juul e-cigarettes reduced smokers' risk to cigarette toxins at similar levels to quitting entirely, according to the first clinical data presented by the company. The figures could help strengthen Juul’s credibility as a smoking cessation tool while the company fends off criticism that it has fueled an epidemic of teen e-cigarette use. Related tickers: MO, BTI, PM

Looking to win back beer drinkers who have defected to wine and spirits, AB InBev (NYSE:BUD), Molson Coors (NYSE:TAP), Heineken (OTCQX:HEINY) and Constellation Brands (NYSE:STZ) have for over a year discussed a potential multimillion-dollar campaign that may now be dead in the water. MillerCoors has pulled out of a meeting slated for next month and said the initiative should be paused following a public "corn syrup" advertising spat Bud Light initiated during the Super Bowl.