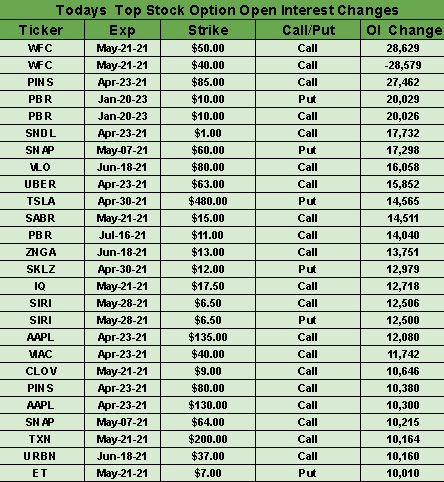 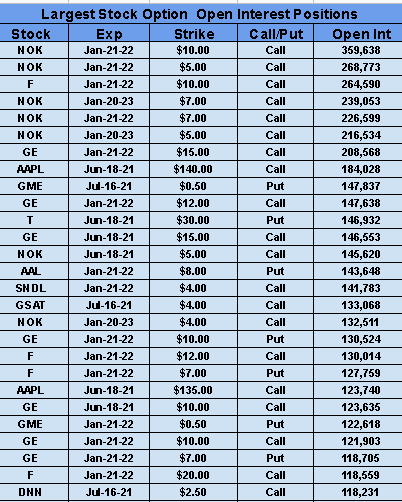 Stocks are set to begin today's session at record highs as trends continue to remain bullish. All three market indexes logged weekly gains last week, with the major banks driving a strong start to the first quarter earnings season. Investors additionally appear to be focusing on the economic recovery despite mounting concerns about new COVID-19 variants, while many of the tech and growth stocks that have long been market favorites showed a resurgence in sentiment.

On tap this week are earnings from a broad swath of Corporate America, including AT&T (T), Coca-Cola (KO), IBM (IBM), J&J (JNJ), Netflix (NFLX) and Lockheed Martin (LMT). Just one week into the season, companies are already beating estimates by a wide margin of more than 84%, according to Refinitiv, which projects Q1 earnings growth will surge 24% from a year earlier. Particular attention this time around will also center around margins. Those will determine whether rising costs are pressuring profits or suggest a buildup of inflation in the economy, but could also signal whether supply chain shortages are affecting companies' bottom lines. The impacts from the reopening theme are also likely to show up in reports, while stock buybacks are set to soar with many U.S. corporations sitting on a cash hoard.

Overnight, Dow Jones futures dipped 0.2%, while the Nasdaq was ahead by 0.1%. Contracts linked to the S&P 500 inched down 0.1% as traders size up what the deluge of earnings reports may mean for the market.

The bulls: "First quarter earnings are coming in very strong. Looks like we could be up 30% year over year. The earnings recession is over," said Federated Hermes' Phil Orlando. "In the second quarter, which will enjoy the full benefit of some of this fiscal stimulus, we could be looking at an earnings growth rate twice that on a year over year basis." He believes the S&P 500 could hit his year-end price target of 4,500 by July (8%+ upside) and "at the pace the economy is growing and earnings are growing, you know we might get there earlier."

The bears: "I'm not necessarily convinced that Q1 earnings season is really going to be all that wonderful," PNC Financial's Amanda Agati declared. "We've seen a lot of those value-oriented stocks, a lot of the lower-quality names, rally pretty hard in anticipation of earnings season. While we think the high bar is likely to be achievable, we’re not really convinced we’re going to see that outsized beat rate that we’ve seen over the last couple of quarters. In our view, Q1 earnings season may unfortunately be 'buy the rumor, sell the news' until we get a more meaningful, broad-based acceleration."

Bitcoin (BTC-USD) has recouped some of its steep losses after sliding to as low as $52,148.98 on Sunday morning, just days after notching an all-time high above $64,800. As of 6:00 a.m. ET, Bitcoin was trading up 2% at $57,271 as the weekend carnage tests the resolve of crypto investors. It follows a big week for the industry, which saw the value of all coins swell to $2.25T due to a frenzy of demand in the runup to Coinbase's direct listing.

What happened? The number one reason for the plunge was attributed to the crypto frothiness seen last week. Take Dogecoin (DOGE-USD) for example, which soared 400% to hit an all-time high of $0.45 after trading at a fraction of a penny not long ago. Another unverified report on Twitter claimed that the U.S. Treasury was looking into charging several financial institutions with using cryptocurrencies for money laundering. Others blamed the selloff on a near-50% decline in the Bitcoin Hash Rate - which measures the processing power of the Bitcoin network - due to power outages in China.

Meanwhile, Coinbase Global (NASDAQ:COIN) is off 4.2% premarket to $327/share, with some likening the decline to a "hangover" after the hype seen last week. Others cited factors like "excess leverage" due to Coinbase insiders dumping equity following the direct listing. Whatever the case may be, the public debut is forcing more Sell-Side analysts to engage in the crypto space, which could bring more transparency and analysis to the asset class.

Go deeper: The argument over the future of Bitcoin will only accelerate due to the recent selloff. HODLers are seeing another "buy the dip" moment, calling the recent plunge a case of FUD, or the dissemination of fear, uncertainty and doubt. They see crypto as a modern-day store of value and inflation hedge, as well as a decentralized finance network that will be adopted by the masses. On the other side of the coin, opponents fear that a speculative bubble is building, and even if cryptos were to achieve more mainstream acceptance, regulators would tighten oversight of the sector.

Latest on the J&J vaccine

The CDC advisory panel is set to meet this Friday to discuss the next steps for Johnson & Johnson's (NYSE:JNJ) COVID-19 vaccine, and Dr. Anthony Fauci wouldn't be surprised if there is a decision that would resume vaccinations. "My estimate is that we will continue to use it in some form. I doubt very seriously if they just cancel it. I don't think that's going to happen. I do think that there will likely be some sort of warning or restriction or risk assessment," he told NBC's Meet the Press. Meanwhile, in a letter published in The New England Journal of Medicine just before the weekend, three J&J scientists said there wasn't enough evidence to support a link between its vaccine and blood clots.

Backdrop: Last Tuesday, U.S. health regulators recommended that the use of the J&J's inoculation be paused "out of an abundance of caution" following reports of six cases of rare brain blood clots in women aged between 18 to 48 (one even died and another is in critical condition). That's out of some 7.8M people who have received the jab across United States. JNJ's single-dose shot was developed using an adenovirus vector similar to AstraZeneca's (NASDAQ:AZN) two-dose vaccine, which has also led to blood clot concerns in Europe.

Later in the week, White House COVID-19 Response Coordinator Jeff Zients said the Johnson and Johnson halt would not have a significant impact on the overall U.S. vaccination program. "We have more than enough supply of Pfizer and Moderna vaccines to continue the current pace of about 3M shots per day," he told reporters at a press briefing. The country is averaging 3.3M daily vaccine doses administered over the past week, and 3M when counting only Pfizer (NYSE:PFE) and Moderna (NASDAQ:MRNA).

Was it the right decision? Critics point to the fact that COVID-19 has killed 566,000 Americans, while blood clots from the vaccines have resulted in one death. There are also concerns about vaccine credibility, especially among populations that have so far been hesitant to take it, while some suggest that regulators should have just stopped giving the J&J jab to younger women, who appear to be most at risk of developing the rare blood clots. However, given the fact that the U.S. vaccination can continue at 3M shots per day even without J&J, others are supporting the suspension until more data is available.

Bringing back the world's biggest IPO?

Ant Group is exploring options for founder Jack Ma to divest his stake in the fintech giant and give up control, Reuters reported, citing meetings with Chinese regulators. The decision would help draw a line under Beijing's scrutiny of the business after it pulled Ant's listing in November, which was set to be the world's largest IPO. Ant denies that a divestment of Ma's stake has ever been under consideration, but then again, a lot of things related to the crackdown on Ant has been happening behind closed doors.

While Ma only owns a 10% stake in Ant (worth billions) and has stepped down from corporate positions, he retains effective control over the company via related entities, according to Ant's IPO prospectus. He also has significant influence over e-commerce affiliate Alibaba (NYSE:BABA), which has a one-third stake in Ant.

Divestment options? Ma's stake could be sold to existing investors in Ant or Alibaba without involving any external entity. Another possibility would be to transfer his stake to a Chinese investor affiliated with the state. Some sources say Ma was told that he would not be allowed to sell his stake to any entity or individual close to him, and would instead have to exit completely.

Thought bubble: Ma's fight with Chinese authorities is another example of the escalating tensions between the state and China's private sector as President Xi exerts tighter control over the economy. Ant's IPO was pulled last year after Ma criticized the Chinese government for tightening financial regulation, but his exit could help clear the way for Ant to revive plans to go public. While Beijing further retaliated with an antitrust investigation, that also wrapped up last week with a $2.75B fine on Ant for "abusing its dominant market position."

Some major upheaval is in store for the soccer world after Europe's wealthiest clubs agreed to join a breakaway Super League. The group currently includes 12 elite English, Spanish and Italian teams like Liverpool, Chelsea, Real Madrid, Barcelona and AC Milan. The plan is backed by $6B in debt financing by JPMorgan (NYSE:JPM) and would be the biggest change to the sport in decades.

Bigger picture: The project is being launched as the UEFA was due to sign off on plans for an expanded and restructured Champions League, which currently dominates European soccer. The teams were not on board with the changes for more matches and teams, and had asked UEFA for equal control of the Champions League, like media and sponsorship contracts. Super League teams would also receive more than €350M for participating in the group, which is more than 5 times what they'd earn in the Champions League.

The Super League will see a total of 20 participating clubs, including 15 founding teams and a further five groups that will be able to qualify annually based on their achievements during the previous season. It is slated to begin in August with clubs participating in two groups of 10, with the top three in each group qualifying for the quarter-finals.

Outlook: If the new league materializes, it could supersede the Champions League or completely eliminate it altogether. The Super League deliberately intends to play mid-week, which is the same time as the Champions League, so teams won't be able to play in both. Skilled clubs will also draw outsized attention, while the plans follow the coronavirus pandemic, when many teams took huge revenue shortfalls in spectator-less matches.

Two die in fiery Tesla (NASDAQ:TSLA) crash with 'no one' driving.

New funding round values Clubhouse at $4B.

Disney (NYSE:DIS) makes the cover of Barron's as streaming star.

U.S. on pace to reach herd immunity in 1.9 months.

Drugmakers go on trial in California over opioid epidemic.