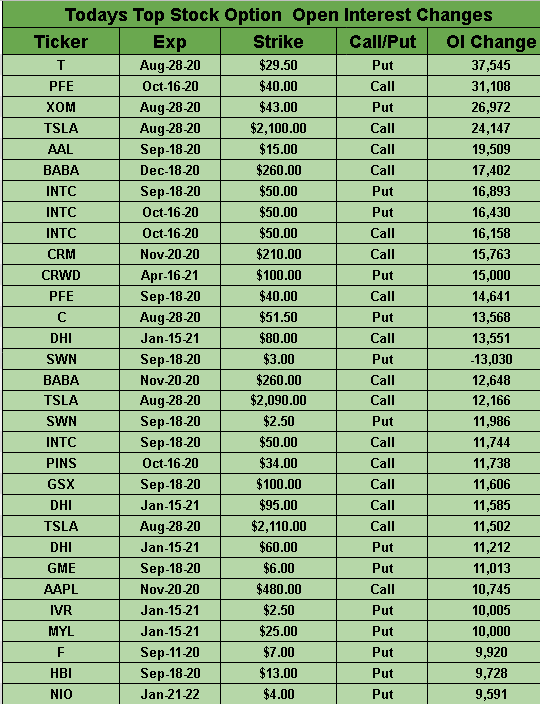 A majority of economists say Congress should reinstate supplemental unemployment insurance benefits as the U.S. economy isn't likely to emerge from the recession until later this year or at some point next year, according to a survey by the National Association for Business Economics. Most of them also support extending the Paycheck Protection Program for small businesses. Two-thirds of the respondents said the economy is still in the recession that began in February and almost 80% indicated that there is at least a 25% chance of a double-dip recession.

Some of the investors in ByteDance (BDNCE), including investment firm General Atlantic, want to take large stakes in TikTok’s North America, Australia, and New Zealand operations while Microsoft (NASDAQ:MSFT) or Oracle (NYSE:ORCL), which are also vying to buy the units, would get a minority stake under the plan. The news comes after reports that TikTok is preparing to legally challenge President Trump’s executive order banning transactions between the popular short-form video app and parent ByteDance. The assets for sale may be valued ~$25B-$35B, sources told Reuters. The ByteDance investors are discussing exchanging some or all of their shares in ByteDance with equity in the TikTok assets, they said.
Go Deeper: See Microsoft's cash, short-term investments and receivables on its balance sheet over the past five years.

More than half of Gulf of Mexico oil production shut down

Energy producers have shut in 1.07M barrels/day, or nearly 58%, of offshore crude oil production and 1.2M cf/day, or 45%, of natural gas output from the U.S. Gulf of Mexico as Hurricane Marco and Tropical Storm Laura head for the region, according to the U.S. Bureau of Safety and Environmental Enforcement. Royal Dutch Shell (RDS.A, RDS.B) shut in production at all but one of its assets in the U.S. Gulf, while Equinor (NYSE:EQNR) evacuated and shut in production at its Titan platform. Workers have been evacuated from 114 production platforms out of the 643 manned platforms in the Gulf of Mexico, the BSEE said. Crude oil prices are pushing higher +0.7% at about 6:00 AM ET.

Two people are confirmed dead and two others are missing after an underwater gas pipeline exploded when it was struck by a dredging boat in the Port of Corpus Christi, TX. Six others working on the vessel were hospitalized after the Friday incident that sent flames several hundred feet into the air and forced the partial closure of the port. Enterprise Products (NYSE:EPD) owns the ruptured pipeline, which was holding propane gas at the time of the explosion. Early estimates indicate the accident caused the release of 5K lbs. of propane and 5K lbs. of carbon monoxide. The barge that struck the pipeline reportedly was owned by marine construction contractor Orion Group Holdings (NYSE:ORN).

That's if the nation is able to reach its target of adding 9M jobs, Premier Li Keqiang said in the western city of Chongqing. He called on the nation to bolster plans to deal with uncertainties after the economy achieved positive results in recent months, according to a statement on the central government website on Sunday. China's economy recovered to growth, with GDP rising in the three months to June, up 3.2% Y/Y, following a 6.8% decline in Q1.

Takeda to sell consumer unit to Blackstone for $2.3B

Takeda (NYSE:TAK) has agreed to sell its Japanese consumer healthcare business to U.S. investment firm Blackstone Group (NYSE:BX) for $2.3B (¥242B). The portfolio to be divested includes over-the-counter medicines and health products that generated total revenue of more than ¥60B in FY 2019. The deal is expected to close by March 31, 2021.