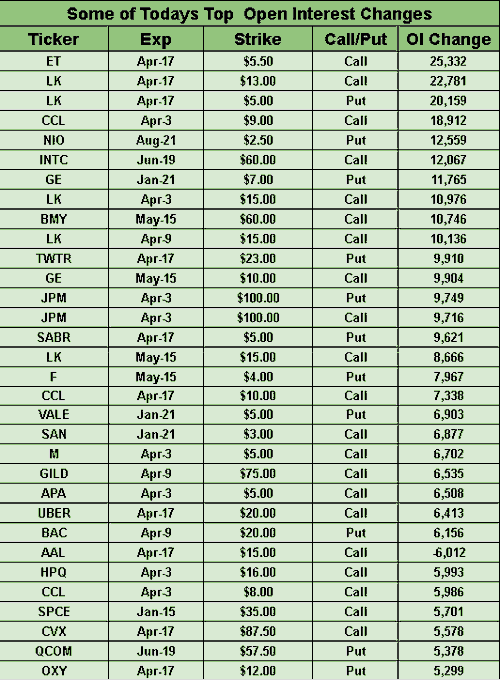 If it wasn't for the coronavirus, the news cycle would most likely be exclusively focused on the oil market, where demand has dropped by as much as 30M barrels per day (roughly equivalent to the combined output of the Saudis, Russia and the U.S.). The latest? WTI crude prices soared 25% on Thursday for its largest single-day percentage gain in history after President Trump said he expects Russia and Saudi Arabia to announce a major output cut deal. Despite swirling skepticism over how relevant that will be - due to depressed demand - crude tacked on another 5% overnight. A virtual OPEC+ meeting is also scheduled for Monday that will be open to producers even outside the group.

Storage is a problem with the market awash in crude, while the U.S. is prohibited by antitrust law to join output cuts (those discussions are taking place at the state level in Texas). Today, President Trump meets with U.S. oil industry executives at the White House, and there's some speculation he could ask the industry to chip in with their own cuts (at the corporate level). The agenda is also expected to include discussions on government support, tariffs on foreign oil, as well as other waivers to ease the pain.
Go deeper: HFIR discusses oil prices in the near-term.

No stability, only volatility

U.S. equity markets climbed 2.2% on Thursday as a surge in oil countered an eye-popping jobless claims report, which showed 6.6M people out of work, and some states even reporting that 10% of their workers are no longer employed. A reminder that today's non-farm payrolls report from the Labor Department won't reflect that data, as the numbers were pulled in mid-March, before a large section of the population was under some form of a lockdown. One day up, one day down... Stock futures are now off 1.3% as concerns mount over a V-shaped economic recovery and economists warn that the government and Fed will need to provide additional stimulus.
Go deeper: CBO sees GDP contracting 7% in Q2.

We're only hours away from a federal program that's expected to dole out at least $350B in loans to small businesses struggling with the coronavirus pandemic, but many banks are still awaiting guidance and necessary requirements. JPMorgan (NYSE:JPM) appeared to be the first lender to publicly say what others had whispered, emailing customers that it "will most likely not be able to start accepting applications on Friday." The Paycheck Protection Program will offer up to $10M to help cover wages for employees, sick pay and eligible mortgage and other immediate debt payments. The loans are for two-year terms at a 1% fixed rate of interest, require no collateral and come with debt forgiveness options for eligible expenses.

In an effort to assist in "unprecedented times," Google (GOOG, GOOGL) is helping public health officials use its vast storage of data to track people's movements due to the coronavirus pandemic. The "mobility reports" go down to the county level to see if locals are abiding by social distancing measures, but will use anonymized historical data, with a lag of two or three days. Google is also reportedly exploring individual location tracking with a White House task force, as well as running a handful of testing sites in Northern California in a private-public partnership with the government.

With no clear forecast of when its parks will be able to reopen, Disney (NYSE:DIS) has announced plans to furlough non-union workers and stop collecting payments for its annual park passes. "Disney employees have received full pay and benefits during this time, and we've committed to paying them through April 18, for a total of five additional weeks of compensation," the company said in a statement. Employees will also be eligible for $600 per week in federal compensation through the $2T economic stimulus bill, as well as state unemployment insurance.

"We hit 3M (NYSE:MMM) hard today after seeing what they were doing with their Masks. "P Act" all the way... will have a big price to pay!" President Trump said in a tweet last night. He was apparently referring to a Fox News report featuring the head of Florida's Division of Emergency Management accusing 3M of shipping N95 respirators to foreign countries who outbid U.S. buyers. Trump earlier announced he was invoking the Defense Production Act for masks and ventilator manufacturing.
Go deeper: White House to recommend cloth masks amid COVID-19.

Tesla (NASDAQ:TSLA) shares soared 12% AH as the EV maker revealed the production of almost 103K vehicles and deliveries of approximately 88.4K (12.2K Model S/X vehicles and 76.2K Model 3/Ys) to mark its best Q1 ever. The consensus analyst mark was for 79.9K deliveries after a series of recent downward revisions to account for the coronavirus impact. Tesla also said that its Model Y production started in January and deliveries began in March, significantly ahead of schedule.

Since the start of the COVID-19 crisis, Corona has been the punchline of jokes and memes. Now, Grupo Modelo (OTC:GPMCF), which is part of brewing giant AB InBev (NYSE:BUD), has stopped producing Corona beer. The move is not associated with the drink's name, but the business was rather deemed non-essential under a Mexican government order. In the U.S., Grupo Modelo is distributed by Constellation Brands (NYSE:STZ).

Jamie Dimon is back at work at JPMorgan (JPM)

American (NASDAQ:AAL) slashes flights, but no plans to stop flying.