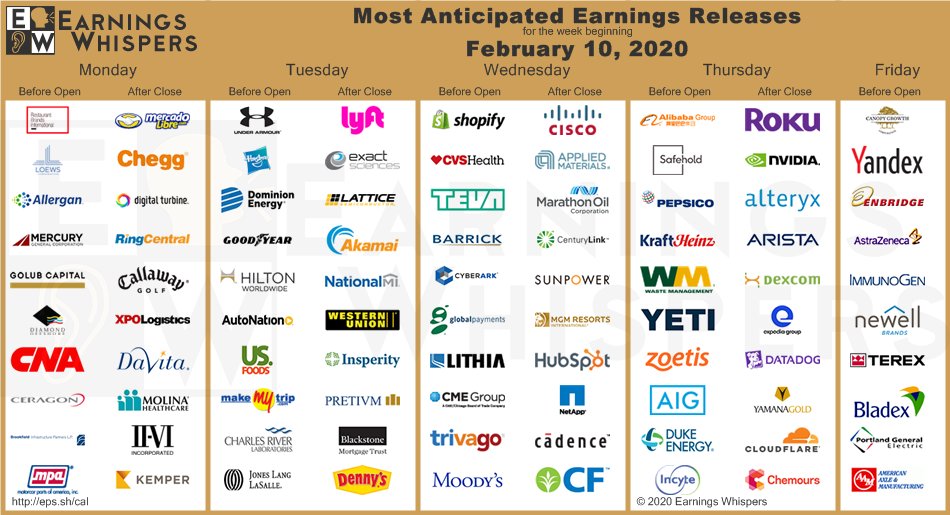 Global markets are treading cautiously after 97 people died from the coronavirus in China on Sunday. Japan's Nikkei and Hong Kong's Hang Seng Index both fell 0.6% on the day, while the Shanghai Composite Index rose 0.5% after some companies like Hon Hai Precision Industry (OTCPK:HNHAF,OTCPK:HNHPD) landed government approval to resume some production at select locations. Meanwhile, European stocks are also having a soft day, with the Stoxx 600 Index slipping 0.3%. U.S. stock futures are flat heading into the new week.

Coronavirus by the numbers

The total number of confirmed coronavirus 2019-nCoV cases across the world is 40,561 and 910 deaths have been reported. Japan's Health Ministry says another 60 people on Carnival Corporation's (NYSE:CCL) Diamond Princess ship have tested positive to bring the total number of people infected to 130. Capital Economics estimates the coronavirus will cost the world economy $280B in Q1 and send global GDP in reverse (quarter over quarter) for the first time since 2009. Still, the longer-term view from analysts isn't so gloomy. "We assume the virus will be contained soon, and that lost output is made up in subsequent quarters so that world GDP reaches the level it would have done had there been no outbreak by the middle of 2021," notes Capital Economics. The People's Bank of China is busy taking action to prop up the economy, injecting 1.7T yuan of liquidity into the market and instructing banks not to call in loans for companies based in the virus-stricken Hubei province.

China's consumer inflation rate rose 5.4% in January to sail past the 4.9% mark anticipated by analysts and 4.5% pace in December. Higher food prices were recorded during the month, driven by strong demand ahead of the Lunar New Year holiday and soaring pork prices. After stripping out the more volatile food and energy categories, core inflation was up 1.5% during the month.

President Trump is expected to release a $4.8T budget today for fiscal year 2021 that includes cuts to some social programs and foreign aid while boosting military spending by 0.3%. The White House budget represents the opening bid in spending negotiations with Congress for the next fiscal year. The U.S. budget deficit is drawing more attention recently after the Congressional Budget Office forecast that the deficit will hit $1.02T in fiscal year 2020, up from a budget deficit of $585B in fiscal year 2016.

L Brands (NYSE:LB) is expected to announce some time this week a deal to unload its Victoria's Secret brand to Sycamore Partners. The Victoria's Secret business generated $7.4B in sales last year, but is viewed by some consumers as out of date with its focus. A few months ago, Victoria's Secret canceled its once-popular annual fashion show. Shares of L Brands are down 10.7% YTD.

Mattel (NASDAQ:MAT) says it closed two factories in Asia and plans to shutter another one in Canada as it keeps looking for ways to cut costs. Manufacturing sites in China and Indonesia were shut down last year by the toy company, while a facility in Montreal that makes Mega Bloks is scheduled to be closed some time this year. Mattel's manufacturing strategy differs from the outsourcing strategy used by rival Hasbro (NASDAQ:HAS), with it employing about 35K workers during peak manufacturing periods. Shares of Mattel are down 7.6% over the last 52 weeks to trail by a wide margin the 11.6% gain for Hasbro. Both companies step into the earnings confessional later this week.

The crypto sector returned to its old ways of making big moves over the weekend. With yesterday's push back above $10K, Bitcoin (BTC-USD) is now up more than 40% in 2020 and stands at its strongest level since September. The one-year high for Bitcoin is around $13,797.

Tesla (NASDAQ:TSLA) resumed production at its Shanghai factory today. Government officials in Shanghai are assisting Tesla in the restart amid the coronavirus outbreak. "In view of the practical difficulties key manufacturing firms including Tesla have faced in resuming production, we will coordinate to make all efforts to help companies resume production as soon as possible," stated Shanghai municipal government spokesman Xu Wei. Meanwhile, Volkswagen (OTCPK:VWAGY) is opening a plant it operates with SAIC in Shanghai and most of the plants in the FAW joint venture. Daimler (OTCPK:DDAIF) and Ford (NYSE:F) are also restarting production at certain locations, while Toyota Motor (NYSE:TM) and Honda Motor (NYSE:HMC) have extended their production shutdowns in China for the time being. General Motors (NYSE:GM) aims to restart production on February 15. Fiat Chrysler Automobiles (NYSE:FCAU) is the first automaker to flag multi-week disruptions at European factories due to parts shortages.

ADP (NASDAQ:ADP) is holding an Innovation Day today. Members of the ADP senior management team and technology organization will provide updates on the company's investments in innovation and the vision for the technology portfolio of the human capital management business. ADP is up 10.1% YTD.

Lockheed Martin (NYSE:LMT) and Raytheon (NYSE:RTN) drop out of the Singapore Airshow.

Facebook (NASDAQ:FB) to battle IRS on $9B tax bill.