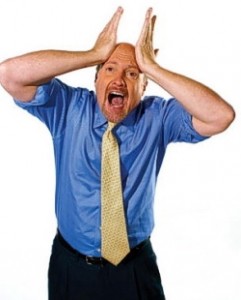 The more I look at the charts from the last few days, the more I am reminded of the momo sell-off in late 2011. The one that had Cramer calling for folks to run to the exits in the high fliers. Priceline? The stock was at $445 when Cramer warned his viewers on that December day. Four months later the stock was at $778. Fossil (FOSL) was $82 at the time. Four months after Cramer would have you out, the stock was up over 50% to $138.

Have we seen this before? Back in 2011, we still had the Eurozone crisis, and yes, the China economy was still in the process of a crash landing. There were still many folks concerned about the U.S. recovery and many were wary about getting back into the market. The VIX? Well that was at 27, implying some major market swings on the horizon. And yes, the momo stocks were selling off in a major way. But in the end it tuned out to be a major buying opportunity.

Is the recent move down in the momo names providing the same opportunity? I think so. It looks to me like folks are selling off the higher growth names for more fundamentally sound plays like Microsoft(MSFT), Apple(AAPL), IBM, and Caterpiller(CAT). Maybe it's the hint of higher interest rates spooking folks into safer names. Who knows. But the 'tell' to me is the VIX, which has been lower this week despite some large moves down in some of the big names.

I am not about trying to catch a falling knife, but i am about finding value in a stock folks have thrown to the curb. And I think stocks like WDAY, PCLN, NFLX, LNKD, AMZN, and other techs that have been beaten down, will rise once again.

I guess time will tell, but think we will look back at the past week as one great buying opportunity. If you missed it, here are my thoughts on where the market is head as well : https://www.optionmillionaires.com/market-headed-higher/