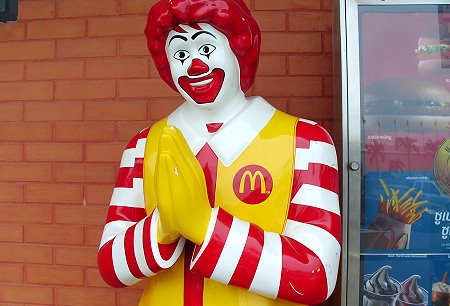 With Company's In Europe unable to get traditional financing through Banks they are thinking outside the (hamburger) box. Has it really come down to this? Apparently it has. A fast food restaurant in Europe, Leons, is asking its customers to buy $2,000 -$5,000 bonds with returns of 8.5 -10%. The catch is the interest payments come in the form of in store coupons! You are paid interest in hamburgers and fries! For those who dine out at Leons on a regular basis it might sound like a good idea to be buying those bonds. However if Leons goes belly up you do not get your money back.

If McDonalds were to run a similar fund raising project buyers of the $2k bond would be get roughly 70 Big Macs a year in interest payments. How's that for an investment strategy? Talk about saving for the future of obesity. How many kids are going to get Fast Food Bonds for their communion and early birthdays instead of savings bonds?

McBonds why didn't I think of that first... or maybe I just did? 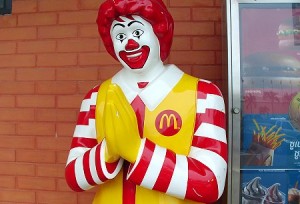 Faced with a drought in bank lending, more British small businesses are turning to their customers for funding, hoping to entice them with high-yield coupons or, in some cases, even plying them with edibles.
Leon Restaurants Ltd. , a London -based fast-food chain, this summer plans to sell its customers at least GBP 1.5 million ( $2.3 million ) in three-year bonds yielding between 8% and 12%. The company will use the money primarily to expand to new locations and hire staff.
Investors won't get any interest in cash, though.
Instead, they will get GBP 120 or GBP 600 in-store credit -- called "Leon Pounds" -- every year, depending on whether they buy GBP 1,500 or GBP 5,000 worth of the bonds. They can also buy a GBP 3,000 bond that yields 10%.
Nicolas Newbold , a regular Leon customer, said he is thinking of buying some. "When I compared this to interest I get at the bank, the investment pays a considerable amount more," he said. Mr. Newbold, 32 years old, figures he spends between GBP 200 and GBP 300 a year at Leon. "As long as I'm going to spend that amount of money in Leon, it's worthwhile."
The money invested will get locked away for the whole term of the bond, meaning if Leon goes bust during that time, Mr. Newbold will be left with nothing. This is different from other retail bonds that can be openly traded in the market.
Mr. & Mrs. Smith, an online hotel-booking service, is looking to raise as much as GBP 5 million through a four-year bond this summer. Unlike Leon, however, the company will let investors choose between a cash and in-kind coupon: They can opt for either a 7.5% yearly return in cash or hotel reservations through the company's website equivalent to a 9.5% return.
Ed Orr , Mr. & Mrs. Smith's chairman, said his company chose to turn to customers for funding because he thought venture-capital funds would dilute previous investors. He also couldn't get a bank loan big enough for his company's expansion plans. Mr. Orr said banks are "really battening down the hatches" in respect to taking on risks.
Leon co-founder and CEO Henry Dimbleby said, "At the moment, in some ways the banks are in disarray," noting difficulties common to many bank customers: each time he called his bank, he found himself talking to a different person. " There's a real opportunity here to create a scenario where investors get better interest rates, and we can expand as we want to," he said.
As the financial crisis shows no sign of lifting, and the loan market no signs of easing, gaining access to long-term funding has been a challenge for small businesses in the U.K. An April report from the Bank of England shows that lending to small and medium enterprises has consistently shrunk since late 2009.
The U.K. government has been active in pushing programs that help small businesses obtain funding, although the problem has proved difficult to fix. The government's first attempt led to the introduction of Project Merlin in 2011 -- an agreement with the country's five main banks to lend businesses GBP 190 billion , GBP 76 billion of which was to be directed toward small businesses.
Another program, the National Loan Guarantee Scheme, was launched this March. "The U.K.'s banks are working to ensure all viable [small and medium enterprises] get either the finance they need or the skills and assistance they need to secure it," said a spokesman for the British Bankers' Association . "The banks are focusing their efforts on businesses that consider seeking finance but don't for some reason -- for instance because of the economic climate or because they feel they will be turned down -- and those that have been declined the finance they requested," he said.
A May 23 report by the BOE network of regional agents said some firms have " responded to tighter credit conditions by seeking alternative forms of finance."
Both Messrs. Orr and Dimbleby pointed out a crucial component to success for companies wishing to turn to their customers for funding: these very customers' trust in their brands. Other U.K. companies that have sold debt in a similar fashion -- like King of Shaves , a men's grooming retailer; Ecotricity, a utility; and Hotel Chocolat , a cocoa grower and chocolatier -- all had this benefit.
For this kind of deal, "you need direct communication to your customers," said Angus Thirlwell , cofounder of Hotel Chocolat , which in 2010 sold about GBP 4 million in bonds that paid interest in chocolate. Depending on how much they invested, customers either received a box of chocolates a month or every other month. "Our club members have an in-built understanding of what it is like to receive a chocolate box each month, which was very important to the success" of the bond, he said.
Mr. Thirlwell said he aims to launch another "chocolate bond," and "wouldn't change a thing" this time around. "In a climate where banks are jumpy, the less exposure we have to them the better," Mr. Thirlwell said. "To go through the banks would in some ways be less complicated. But this gave us a sense of independence," he said.
Mr. Dimbleby said his company initially explored bank loans to fund its expansion plans, but that he changed his mind after a conversation with Mr. Thirlwell at Hotel Chocolat .
"Bank loans are very expensive, with banks being very careful with their cash flow," Mr. Dimbleby said. "But we're more profitable than we've ever been. It's a good time to expand. Financing directly from our club members made the most sense."
Mr. Newbold, the potential Leon investor, says he would have the extra perk of helping out a restaurant that produces food he likes. And then there's the bet that he could get a little something extra.
"Who knows, they might even put one near my house," he said.

3 thoughts on “McBonds With Honey Mustard”