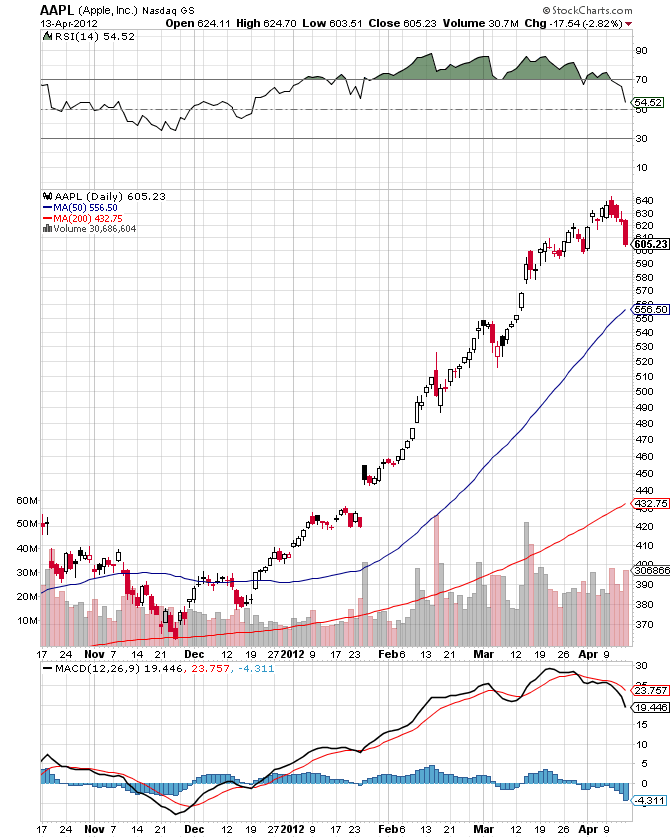 On April 9th one lone analyst downgraded AAPL from a buy to a hold.  I recall listening to bloomberg that afternoon and hearing how bold his call was. The radio heads were shocked that someone saw AAPL as a stock that might actually go down.  In a market where selling is shunned, especially a stock that went parabolic since Christmas, they found it hard to believe that someone was calling for AAPL shares to drop.  I wouldn't have been surprised if they gave out the analysts name and address over the radio so he could be hunted down.  Investors could be bused to his house and shell the outside with rotten AAPL's.   By the way the analysts name is  Walter Piecyk of BTIG Research (and no... I don;t know where he lives).  At the time he downgraded AAPL every other analysts was upgrading AAPL's price target.  Most to $700-$800's and some to over $1,000 a share.  AAPL could do no wrong... but since that time the stock has fallen at an increasingly alarming rate.  Could Walter Piecyk's downgrade be the straw that broke the camels back?

One look at AAPL's chart and you wonder why the big rally from December. 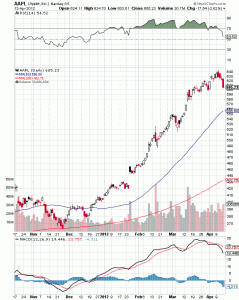 I broached this topic a few weeks ago.      It's not like AAPL suddenly reinvented the wheel.  With all the upgrades and giddiness about AAPL it had to end at some point.  The recent bout of selling should continue next week.  Those who were buying at the top this week, will be the ones liquidating next weeek because of margin calls.  The 50 day is much lower than we are now... a good 10% lower for AAPL.  Could we see $550?  Absolutely.  The market loves to go to extremes.  I don't think this marks the end of the love affair for AAPL, which means dips will still be bought.  I have a tough time seeing AAPL drop below $575, a lot of it will depend on Spain and the rest of Europe.

33 strong buy ratings for AAPL, 3 moderate buy, and 2 holds.  Not one sell recommendation.  If that's the case AAPL should already be at $1,000, as there would be no sellers for all the buyers.

What do I think about AAPL?  A great company with tremendous products, but a stock that could be vulnerable, at least short term, to some more declines.  Kudos to the lone analyst that isn't trying to pump AAPL for his/her own gain. Walter Piecyk when the disgruntled AAPL shareholders come and peg your house with dirty, rotten apples, just look at them and make sure they know that it sucks to be wrong.  With every raging bull calling for the moon for AAPL stock, you stuck your neck out and called it perfectly.

One thought on “Lone AAPL Downgrade Mocked, Now Looking Like The Only Honest Analyst Out There”