$LOCK tumbled over 17% today alone.  The stock  has been in a tailspin.  Is it time to step in and buy for a reversal higher?

I don't think so.  I see broken trendline support and the next logical landing zone at $8.50.  At that price I think the stock will see a sharp reversal and I will be a buyer of calls.  Right now the dust is flying high as sellers scurry to salvage their money.  Lets wait for the dust to settle.  It's easy to want to get in front of this selling and try to find the bottom.  It's even easier to do nothing right now and watch others risk their capital trying to catch a falling knife. 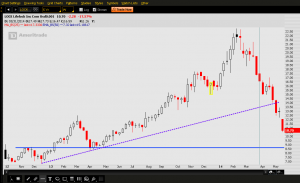 Lifelock (LOCK) shares fell in Monday's pre-market session, after the provider of identity-theft-protection services in a late-Friday regulatory filing said it temporarily suspended its Wallet mobile application and is deleting the data from its servers, after it determined that certain aspects of the application--which came as part of its acquisition of Lemon Inc.--aren't fully compliant with applicable payment-card industry security standards.

The company noted it has no indication that the data included in the Wallet mobile application servers was compromised, while adding that the Wallet mobile-app storage processes are separate and independent from its core identity-theft protection-services business.

"As such, we do not expect the suspension of the Wallet mobile application to impact in any manner the core functionality or utility of the identity theft protection services we provide to our members," the company said.

The company said it informed the Federal Trade Commission of the issues, warning investors that it is possible for the PCI non-compliance of the Wallet mobile application "could result in a determination by the FTC that we are not in full compliance with our FTC consent order."

On a conference call Monday morning, the company added it is unable to give a precise estimate on when it can return the app to the market. It does plan to relaunch the Wallet app, but won't do so until security standards are fully audited and confirmed by a third party, it said.

$LOCK Locked and Loaded for A Rally?