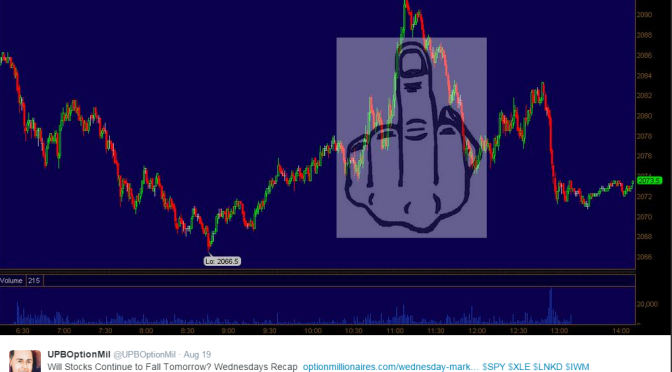 Stock futures are flat after yesterdays .5% pull back.  What was significant was the market closed at the session lows.  Something it has only done one other time in 2016.

What does that tell you?  That every dip in this market has been a great buying opportunity.  And it has ----  as stocks have rallied to new all time record highs.  Every dip, every collapse, every war, every debt downgrade, every sequester, every day.......

But that wasnt the case last August after the FED minutes.  Well not right after.   After last years FED minutes the market rallied.... and then it fell until it collapsed a few days later.

and the recap after that day:

and here is what the market did after the FED minutes day in 2015:

of course most of the downside action was blamed on China.  But it was after the FED minutes where the hairline cracks started to turn into fissures.

Yesterdays close at the lows for only the 2nd time all year could be revealing... if we get some follow through.

We have not seen downside get any follow through recently.    Right now the market is looking at a slightly higher open, which in itself is a someone what positive development if you are one of the few bears left out there.  On previous sell-offs the market would recover a lot of those losses into the close and then gap higher the following day.

and the last  10 trading days:

and for any real downside for the market $IWM $120 will need to be breached.  That $120 figure was key last summer as well.

Where does the market head after today's FED Minutes?  Will they be fuel for another move to new record highs?  Or are we setting up for another late August swoon?

and finally the VIX.  After flirting with 30 a few times at the start of 2016, the VIX has spends the majority of its days laughed at, much as it was in the summer of 2015.  Volatility was low and it looked poised to take the VIX under 10.  But then August happened and the VIX moved over 50.

We sit at the same laughable lows.    Market volatility has been very low.  Is that about to change?  VIX Happens.  History doesn't always repeat itself, but the market has a habit of going to extremes very quickly.