It was back in May of 2011, when LinkedIn (LNKD) had it’s IPO, one which saw the stock double on it’s first trading day. I still remember watching this interview of the CEO Jeff Weiner , and was impressed at what he had to say. Of course the talk turned from a hot stock, to a bubble immediately as folks turned their attention to so-called fundamentals. Just two days after the IPO, there was a line to borrow shares to short the stock. It seemed to be an easy bet, as euphoria tends to push stocks too high too fast. The stock faded slowly into the $70s, which is when the company announced a secondary offering that would nearly double the amount of shares outstanding. Couple that with the ending of a lock-up period, and you have a recipe for a pullback, and pullback it did. The stock traded down into the $50s , and continued to tread water to end 2011. In 2012 LinkedIn(LNKD) started to gain a bit of traction and closed at $76 on Feb 9th, 2012, which was the day we said the stock turned from garbage to growth stock, a bandwagon we have continued to ride, despite the same bloated fundamental arguments being given to us at each new high. So why am I talking about LinkedIn(LNKD) when this article is about Zillow(Z)? To see the future sometimes you need to look at the past. In building the bull case on Linked(LNKD) at $76 in Feb 2012, we looked at Salesforce.com(CRM), another supposedly bloated stock that continues to defy gravity even to this day. Now we are building our bull case on Zillow(Z) using those previous examples.

Those are some of the reasons I love Zillow(Z) here, even with the huge move it has had this year. Can this be a $150+ stock? Sure, why not. The recent secondary offering announced a few weeks back presented a great buying opportunity, and now the stock looks set to break over $100. Smart companies utilize times like these to finance growth, and Zillow(Z) has picked a great time to do so.

Folks continue to use bloated fundaments, insider sales, competition worries, and huge short interests to validate a bearish position. I take the opposite view and think this could continue to be the monster stock of 2013. Time will tell, but we currently hold September $105/$110 calls and may add or close our position at anytime. 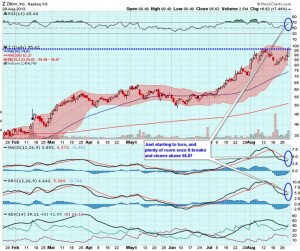