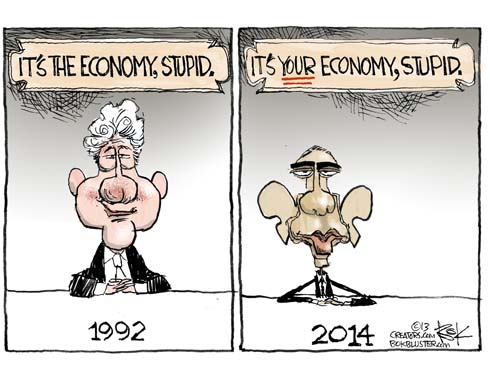 If stocks were trading based upon the economy the last five years I am not so sure we'd be at these current record prices.  No...It's not the Economy.  It's Inflation, Stupid.

The IMF is out today stating that the risk for deflation is growing, posing a risk to the global economy.   We've heard this before.   The IMF also warned about the risks concerning tapering from the Fed.  To think... after all the extraordinary measures the central banks have done over the last 5 years, deflation remains a much bigger risk than inflation.

Central banks will continue to do everything in their power to stave off deflation.  What does this mean for investors in the stock market?  Higher prices.  While many point out the lofty valuations of stocks,  they are going to get loftier as central banks continue to support schemes to promote inflation.

The head of the International Monetary Fund warned Tuesday that inflation rates in the euro zone and other leading economies are too low and pose a risk in the outlook for the global economy.

The comments highlight growing concern as to whether the euro zone might be heading toward deflation. Inflation reached just 0.7% in the 18-member bloc, far below the European Central Bank's target of just under 2%.

"In terms of risks that we see on the horizon, one is the sustainably low--too low--inflation, particularly in the euro area but more generally in the advanced economies," said IMF Managing Director Christine Lagarde during a news conference with Chancellor Angela Merkel and the leaders of the world's main economic organizations here in Berlin.

Another risk "is also the tapering of the monetary policy initiated by the Fed and its consequences in terms of spillover to the emerging market economies," Ms. Lagarde warned.

Low inflation has also alarmed the European Central Bank, with President Mario Draghi saying last week the bank might be willing to impose additional easing due to weak annual inflation in euro zone. Low inflation is a risk to investments because consumers and companies might delay spending in the hope for falling prices.

Economists have said the ECB could embrace extraordinary stimulus measures, such as negative interest rates and large-scale bond purchases, to prevent persistent low inflation or deflation.

Commenting on the state of the global economy, Ms. Lagarde said the situation is getting better, with growth expected to reach 3.6% this year and 3.9% next year because of a pickup in advanced economies. But she also warned that the crisis in Ukraine poses a risks to the global outlook and has already hurt the economic prospects for Russia.

Ángel Gurria, secretary-general of the Organization for Economic Cooperation and Development, said the global economy is doing better but it is "not out of the woods yet."

"We are still carrying the legacy of the crisis on our shoulder," he said.

The comments came after a meeting of the heads of the IMF, OECD, World Bank, World Trade Organization, and International Labor Organization with the German chancellor in Berlin.

"Global activity has broadly strengthened, but is still far from a robust and sustainable growth path. Considerable risks of various kinds remain," the leaders said in a joint statement. "Debt levels in most industrialized countries are still too high, at the government, company and household level. Tackling unsatisfactory labor market performance in many countries remains a fundamental challenge."

They called on governments to boost efforts to ensure growth and to see that fiscal consolidation is sustained and carried out at an appropriate pace.