In the middle of January Gamestop warned of a terrible winter season (apparently no one plays video games when they are shut inside their house during snowstorms) and the stock dropped 20%:

GameStop reports earnings before the bell tomorrow.  What will the streets reaction be?  Judging from GME's chart  I think we will see a sharp move lower.  The over 30% short interest also backs this view.... But if you ask any of the host of analysts out there, they think the stock is undervalued and should rally from here.  Who will be right and who will be wrong?

My money is in the $36 weekly puts.  These are an incredibly risky investment. Should GME rally 20% instead of drop 15%, I stand to lose 100% of my investment.  But if $GME makes the post earnings move that I think it will,  there will be some nice profits for the buyers of PUTs.

I bought the CALLs for $FIVE earnings,  those worked out 300% to the upside,  I am willing to risk some of those profits on a chart, stock, company, that I think it breaking down. 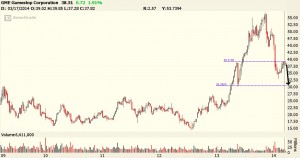