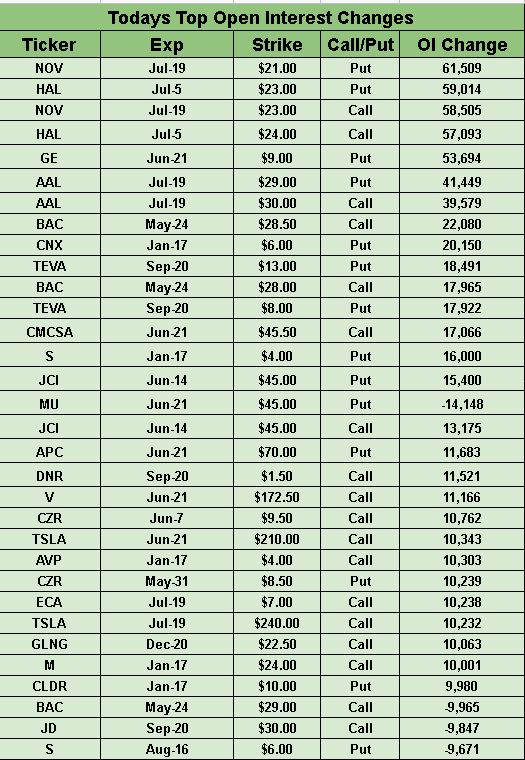 The time is up for Theresa May as the U.K. prime minister announced she will resign on June 7, while the process for electing a new leader will begin next week. "It is and will always remain a matter of deep regret to me that I have not been able to deliver Brexit," she declared, adding that it will be for her "successor to seek a way forward that honors the result of the Brexit referendum." Sterling gained 0.5% to $1.2711, but could face far more volatility over the next few trading days.

Wall Street is hoping to cap the last day of a tough week with modest gains, following a 300-point rout for the Dow Jones Industrial Average last night that tipped the benchmark into a week-to-date decline of just over 1%. DJIA futures now suggest a 135-point gain at the open as President Trump signaled a trade deal with China could lift tough restrictions on "dangerous" Huawei and predicted a swift end to the ongoing tensions. Oil rose more than 1% overnight, although it's still set to record its biggest weekly loss of the year, while 10-year Treasury yields are at their lowest since 2017.

Echoing a similar program last year, the Trump administration has rolled out a $16B plan - which won't require congressional approval - to help farmers hit by the trade conflict with China. The action comes as prices for commodities such as soybeans, corn and sorghum, already mired in a yearslong slump and hit by flooding and wet weather, fell last week to their lowest level in more than a decade. "Farmers themselves will tell you they'd rather have trade than aid," said Agriculture Secretary Sonny Perdue, but in the absence of a deal "they'll need some support."

Shares in the embattled German lender hit a record low ahead of what turned out to be an acrimonious board meeting at which Chairman Paul Achleitner took the brunt of the backlash from investors complaining about the group's dismal performance. Deutsche (NYSE:DB) is now prepared to make "tough cutbacks" again at its struggling investment bank in an attempt to restore market confidence following the breakdown of merger talks with Commerzbank (OTCPK:CRZBY). It may also target its U.S. equities business, including prime brokerage and equity derivatives.

Facebook's (NASDAQ:FB) vaulting ambition to create a new global digital currency has led it to hold talks with some of America’s largest trading houses and crypto exchanges, FT reports. They include Jump and DRW, Chicago's biggest high-frequency trading firms, as well as Coinbase and Gemini, which was founded by Mark Zuckerberg's sworn enemies - the Winklevoss twins. The project is thought to be "bigger and more open" than just a way to make payments and purchases within Facebook, Instagram and WhatsApp, linking the currency's value to the dollar to be used across the real world.

Looking to jump-start its Prime one-day shipping program, Amazon (NASDAQ:AMZN) is offering steep warehouse discounts of up to 75% to get sellers onboard. Independent merchants are particularly important to the goal, since they make up about 58% of Amazon's total online sales. One-day shipping will encourage consumers to spend more online, which still accounts for just 10% of U.S. retail spending, and will upend an industry already working overtime for deliveries.

Shaking up the broadband market

A SpaceX (SPACE) Falcon 9 rocket last night launched its heaviest payload ever, blasting off from Cape Canaveral with 60 satellites on board. The mission represents the company's ambitious plan to build an interconnected satellite network - called Starlink - which will beam high-speed internet to anywhere on the planet. SpaceX eventually plans to build a mega-constellation of nearly 12,000 satellites to generate much-needed cash for Musk's larger ambitions in space.

Although the agency is not committing to a timetable, FAA representatives told the United Nations' aviation agency that the grounding of Boeing's (NYSE:BA) 737 MAX in the U.S. could end as early as late June, Reuters reports. The target, if achieved, means U.S. airlines would likely not have to greatly extend costly cancellations of MAX jets they have already put in place for the peak summer flying season. Separately, Boeing has dropped the Embraer (NYSE:ERJ) name from its Brazil commercial jet division after paying $4.2B to buy 80% of the operation.

'Tesla (NASDAQ:TSLA) Bears Need To Take A Step Back, Too' writescontributor Vince Martin.