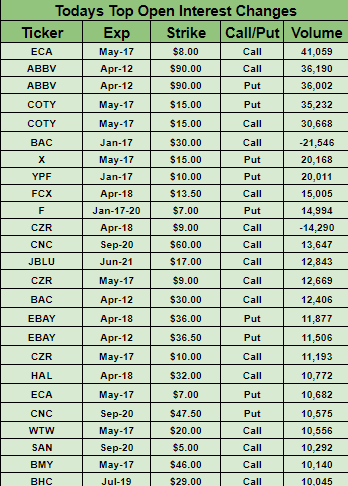 Earnings season kicks off in earnest today, with major U.S. banks - JPMorgan (NYSE:JPM), Wells Fargo (NYSE:WFC) and PNC Financial (NYSE:PNC) - set to get the ball rolling before the opening bell. Dow futures are up 175 points ahead of the Q1 reports, with the S&P 500 and Nasdaq 0.5% higher. While some analysts see an earnings recession ahead, that may not affect equity prices as much as one would think. "The business cycle, or the profit cycle, works at a different speed than an economic cycle," said Joseph Zidle, chief investment strategist at Blackstone.

Chevron (NYSE:CVX) plans to acquire Anadarko Petroleum (NYSE:APC) in a stock and cash transaction valued at $33B, or $65 per share, enhancing its Upstream portfolio and strengthening its shale, deepwater and natural gas resource basins. Anadarko shareholders will receive 0.3869 shares of Chevron and $16.25 in cash for each APC share. The deal anticipates annual run-rate synergies of approximately $2B, and will be accretive to free cash flow and earnings one year after close. If approved, Chevron said it also plans to boost its annual share buyback program to $5B from $4B. CVX -2.4%; APC +33.7%premarket.

Tesla (NASDAQ:TSLA) has begun leasing its Model 3 sedan in the U.S., in a financing option that would increase the EV maker's base. However, customers will not have the option to buy their cars at the end of the lease, as the company intends to use the vehicles for its long-planned Tesla Network ride sharing program. Tesla has also halted online sales of its $35,000 Model 3, meaning the lowest-priced version available on the net for order is now the $39,500 Standard Plus (which includes Autopilot). TSLA +1% premarket.

A tale of two historic launches

The most powerful operational rocket in the world, SpaceX's (SPACE) Falcon Heavy, launched its first commercial mission yesterday evening, with all three boosters returning to Earth. At a price of $90M per launch, it's also about a third of the cost of its closest competitor, United Launch Alliance's (BA, LMT) Delta IV Heavy. In other space news, Israeli spacecraft Beresheet failed to make a soft landing on the Moon (a first for a private entity). The lunar lander was launched on a SpaceX Falcon 9 rocket on Feb. 21 and has orbited Earth and the Moon for six weeks.

The retail industry has issued a forceful response to yesterday's challenge from Jeff Bezos, which dared Amazon's (NASDAQ:AMZN) top competitors to "match our employee benefits and our $15 minimum wage." "How about paying your taxes?" declared Walmart's (NYSE:WMT) Dan Bartlett, stating Amazon paid $0 in federal taxes on more than $11B in profits last year. "We decided to put [tax savings] back into the community of our colleagues," Macy's (NYSE:M) CEO Jeffrey Gennette added, while eBay (NASDAQ:EBAY) CEO Devin Wenig fired back, saying, "we don't compete with our sellers. We don't bundle endless services to create barriers to competition."

Disney+ will be available starting Nov. 12 for $6.99 a month, or $69.99 per year, a price point the entertainment giant hopes can undercut Netflix (NASDAQ:NFLX) in an increasingly crowded field. Disney (NYSE:DIS) has already confirmed a number of television series and films that will solely be available on the service, as well as all Disney films released in 2019. CEO Bob Iger further announced plans to step down from the company in 2021, although he's said that several times before.

May hints at customs union compromise

"There is actually more agreement in relation to a customs union than it is often given credit for when different language is used," Theresa May told MPs just hours before she met with opposition leader Jeremy Corbyn. That's her biggest hint yet that she’s less opposed to staying in a post-Brexit customs union with the EU than might appear. Corbyn meanwhile wants a customs union with add-ons that would give the U.K. some kind of say in trade policy.

Europe is set to start trade talks with the U.S. after EU ambassadors gave a green light to a proposed mandate for the European Commission to conduct the negotiations on behalf of the 28 EU member countries. The talks commence despite opposition from France, which expressed concerns over the U.S. intention to withdraw from the Paris Agreement on climate change. EU ministers still need to give their rubber stamp, which is due on April 15.

Who's winning the trade war?

China's total trade with the U.S slumped by 11% in the first three months of this year, according to the latest customs department data. That's mainly due to a 28% slump in U.S. imports to China for the first quarter, in yuan-denominated terms. Exports to the U.S. fell 3.7% over the same three months. In March alone, U.S. imports into China fell 21%, while Chinese exporters shipped 10.6% more back to American consumers.

The IMF and the World Bank will kick off their spring meetings today, with finance ministers and central bankers from around the globe gathered in Washington. A Group of 20 meeting will take place on the sidelines. In its World Economic Outlook this week, the IMF again downgraded its 2019 global economic forecast (to 3.3% growth), warning of a slowing world economy and urging leaders to be careful in what it called a "delicate moment."

Uber (UBER) unveils IPO, but warns it may never make a profit.

If you look under the hood, Lyft (NASDAQ:LYFT) has no moat, network effect or future, says contributor From Growth to Value.

J. Crew is considering an IPO for its Madewell clothing brand.