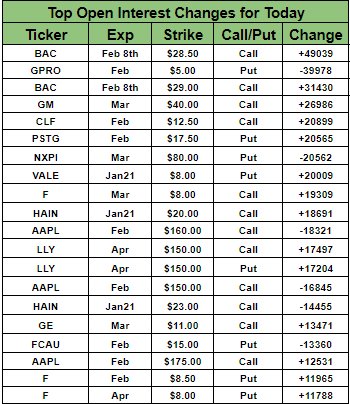 U.S. stock futures point to additional losses after President Trump said yesterday that he would not meet with China's President Xi before a March 1 deadline set by the two countries to achieve a trade deal. The remarks, which followed comments from White House economic advisor Larry Kudlow that a "pretty sizable distance" remained between the two sides, dampened growing optimism for a trade deal in the short term and weighed on stocks. "The keystone in the wall of worry is the trade discord," CFRA Research's Sam Stovall said. "Should the negotiations crumble, so too will near term support for equity prices."

Pres. Trump is set to sign an executive order next week banning Chinese telecom equipment from U.S. wireless networks, in a move aimed at protecting the U.S. from cyber threats, Politico reports. The administration reportedly plans to release the directive before the Feb. 25-28 MWC Barcelona conference to send a signal that future contracts for cutting-edge technology must prioritize cybersecurity. Many countries seek to deploy next-generation 5G wireless networks to power the rapidly proliferating IoT, and Chinese firms such as Huawei and ZTE (OTCPK:ZTCOY) are aggressively pushing to build these networks at a lower cost than their competitors.

St. Louis Fed President James Bullard says current Fed policy is a "little bit restrictive," and he's concerned that the approach "might be putting downward pressure instead of upward pressure on inflation." Admittedly dovish, he says the central bank needs to be more concerned about slower growth than higher prices. He's ready to scrap the Fed's "dot plot," which was more useful when rates were stuck near zero, but he's OK with where the FOMC is at the moment: "I'm pretty happy where rates are today."

Iron ore futures extend their recent rally, surging as much as 5.8% to $94 per ton in Singapore, the highest since August 2014. Prices are up 9% so far this week, after jumping 14% last week in the aftermath of the deadly accident at a Vale (NYSE:VALE) tailings dam in Brazil that knocked out 40 million tons of annual production. Vale invoked force majeure earlier this week after a judge forced it to suspend some operations at its Brucutu mine in Brazil, a move the company said would result in the loss of an additional 30 million tons per year of production. A major risk is that the Brucutu operation may be "the first of many of Vale’s mines to see its production halted," with the prospect that tighter regulations may affect supplies from other miners, Citigroup says.

France says it will support a European Union proposal to regulate Russia’s Nord Stream 2 gas pipeline, potentially threatening the project’s completion and dealing a blow to Germany’s government, which has been trying to win support for the project. The EU wants to extend its internal energy market laws to offshore gas pipelines before construction is completed, giving it a say over how Nord Stream 2 from Russia to Germany is used. In its current form, the project owned by Russian state energy firm Gazprom (OTCPK:OGZPY) would not be compliant with tougher new rules foreseen for new infrastructure projects. Any delay in building the pipeline would create uncertainty for Gazprom’s partners, including Royal Dutch Shell (RDS.A, RDS.B).

House Democrats introduce a "Green New Deal" aimed at making the United States carbon neutral in 10 years, also setting a marker for Democrats who plan to make climate change a central issue in the 2020 presidential race. The plan, introduced by Rep. Alexandria Ocasio-Cortez and Sen. Edward Markey, calls for new projects to modernize U.S. transportation infrastructure, de-carbonize the manufacturing and agricultural sectors, make buildings and homes more energy efficient, as well as universal health care, federal job and training guarantees and other progressive staples. Republicans call the plan a "socialist manifesto" that would "take our growing economy off the cliff and our nation into bankruptcy."

Jeff Bezos has accused the National Enquirer and its publisher American Media of trying to blackmail him by threatening to release embarrassing photos. Personal text messages from the Amazon (NASDAQ:AMZN) CEO previously ended up in the Enquirer, linked to Bezos' high-stakes divorce from wife MacKenzie, and Bezos hired independent security, convinced that the leak was politically motivated because of investigative pressure from The Washington Post, which Bezos owns. Now Bezos says AMI and the Enquirer are threatening to publish photos, including a nude self-portrait, if he doesn't publicly affirm that he has no basis for suggesting American Media coverage of Saudi Arabia was politically motivated, or influenced by political forces such as President Trump - a friend of AMI's David Pecker. "If in my position I can’t stand up to this kind of extortion, how many people can?" Bezos asks.

Yesterday's merger deal between BB&T (NYSE:BBT) and SunTrust (NYSE:STI) could serve as a "catalyst for consolidation," analysts said, as other large regional banks feel the pressure to take on the industry's largest players. The financial crisis prompted new regulations that has largely kept banks out of M&A activity, but rules have loosened considerably in the Trump administration, leading some to predict more consolidations in the industry. "A positive share reaction to the transaction could help induce managements to more actively consider tying up with other depository institutions," UBS analysts wrote, and BB&T bounced 4% and STI surged 10%. Meanwhile, Rep. Maxine Waters, Chair of the House Financial Services Committee, said the proposed deal “raises many questions and deserves serious scrutiny” from banking regulators and Congress.

A 14% stock price decline over the past week may be a large part of what's driving Sony (NYSE:SNE) to issue its biggest-ever share buyback, a ¥100 billion repurchase (about $911 million). The repurchases will be completed between February 12 and March 22, a sign that Sony seems ready to use a strong balance sheet to stick up for shares it thinks are undervalued. The buyback will call home about 2.36% of shares, and it is Sony's first since 2004. ADRs wrapped up yesterday's post-market session about 4.9% higher, and Tokyo shares were running 4.2% higher late Friday in Japan.

A U.S. bankruptcy judge approved Sears (OTCPK:SHLDQ) Chairman Eddie Lampert’s $5.2 billion takeover of the troubled retailer, allowing the department store chain to avert liquidation and preserve tens of thousands of jobs. Lampert, the only bidder offering to keep Sears alive through his ESL Investments hedge fund, agreed to a deal for 425 stores after negotiations in January. Lampert and ESL still remain exposed to lawsuits related to certain transactions he engaged in while leading Sears before filing for bankruptcy. Sears has left open the possibility that it may need to close more stores and cut more jobs in the future.

Bowing to pressure from Washington, Johnson & Johnson (NYSE:JNJ) will start giving the list price of its prescription drugs in TV ads, becoming the first pharmaceutical company to do so. First up would be blood thinner Xarelto, with commercials by late March ending with the drug's price plus typical out-of-pocket costs - $450-$540 per month without insurance. The Trump administration has been pushing for this sort of disclosure, but drugmakers have argued back that few actually pay such high list prices. All seven major pharmaceutical players have agreed to testify to the Senate on February 26 about drug pricing.