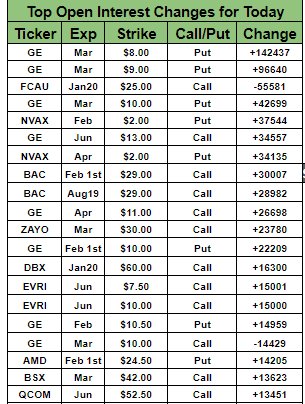 The Fed's dramatic U-turn on policy stole the limelight this week, but the Labor Department's nonfarm payrolls report will also be on investors' minds today. Shutdown effects? Government workers are not counted as unemployed so they will not impact total payrolls - forecast to come in at 165K and mark 100 straight months of job creation - but they could influence the unemployment rate, sending it slightly higher to 4%. Average hourly earnings are expected to have increased 0.3% after climbing 0.4% in December.

Weak Chinese data is leading U.S. futures to inch into the red, slightly dampening the risk rally that took them to their best January since 1987. A reading from Caixin/Markit showed the slowest Chinese manufacturing activity since February 2016, adding to a growing list of troubling economic readings. Analysts are still debating whether the stock pop in January was the beginning of a big new move higher or just a rebound from oversold levels.

President Trump is optimistic that the world's two largest economies could reach "the biggest deal ever made" and confirmed that a U.S. delegation will visit China in mid-February for a new round of trade talks. The feeling is mutual. China's trade delegation said the latest negotiations with the U.S. in Washington made "important progress" and focused on three key themes - "trade, structural issues and enforcement."

Energy traders are scrambling to cope with the abrupt end to the polar vortex blasting the U.S., looking to unwind natural gas trades to cope with next week’s milder weather. The commodity has already fallen 9% over the past five sessions. "We're talking about going from minus-50 wind chills in Chicago yesterday and today to plus 50 degree temps over the weekend," said Daniel Leonard, senior meteorologist at The Weather Company.

Slipping for a third consecutive month, eurozone inflation rose 1.4% in January - slowing from the 1.6% reported in December - as the impact of higher energy costs abated. However, the core rate slightly increased in a comforting sign for the ECB and its monetary policy decisions. Excluding volatile energy and unprocessed food prices, the indicator inched up to 1.2% in January, above expectations of an unchanged 1.1% reading.

Narendra Modi's government has unveiled an interim 2019 budget with 750B rupees ($10.6B) in cash for Indian farmers and a tax cut for low-income workers, hoping to woo key voter bases ahead of a general election due by May. While Modi's Bharatiya Janata Party is feeling the heat after losing control of three key states in December, its latest budget could come at a cost by letting fiscal deficit targets slip this year and 2020.

General Electric shares soared nearly 12% yesterday after the conglomerate beat Q4 estimates for sales and cash flow, while reaching a $1.5B settlement with the DOJ over its accounting practices. GE also confirmed it has no plans to sell aviation unit GECAS, shooting down recent rumors. Amazon (NASDAQ:AMZN) shares also soared after the bell on AWS strength and a beat across the board, but dropped 4.3% during its earnings call when the company warned of increased investments.

Apple restored Google's (GOOG, GOOGL) enterprise developer certificates late Thursday after revoking them earlier in retaliation for its "Screenwise Meter" app that violated its policies. Apple (NASDAQ:AAPL) did the same thing to Facebook (NASDAQ:FB) on Wednesday and, until now, it seems that Google might have gotten away for violating the same policies as Facebook. Since then, the iPhone maker has restored Facebook's enterprise certification.

U.S. sanctions against Venezuela's oil sector are forcing the country's Citgo Petroleum, one of the largest refiners in the U.S., to consider bankruptcy as a way to protect its operations amid the battle for political control in Caracas, WSJ reports. Some U.S. refiners have already begun reducing crude processing as crude oil costs have risen following the sanctions and as gasoline margins crashed to their lowest in nearly a decade.

The world's largest brewer will not say how much it's spending for nearly six minutes of commercials during Sunday's Super Bowl, but industry sources estimate Anheuser-Busch InBev (NYSE:BUD) is shelling out more than $50M. That's up from the $42M that Kantar Media said the brewer spent for four minutes of ad time last year. It's part of AB InBev's strategy to recapture market share from craft beers and Mexican imports.

Tesla will start taking orders in China today for a lower-priced version of its Model 3 - a rear-wheel-drive variant that will start at 433,000 yuan ($64,300). Previously, an all-wheel-drive model cost 499,000 yuan. Keeping prices in check will help Tesla (NASDAQ:TSLA) fend off domestic competition and minimize the impact of a trade war that has so far forced the EV maker to adjust its Chinese car prices.

Germany's government is considering purchasing 45 Boeing (NYSE:BA) F/A-18 fighter jets for its air force, in a surprise blow to Lockheed Martin (NYSE:LMT), which makes the more advanced F-35 and had hoped to clinch the German bid worth billions of dollars. Germany's potential U.S. order would come on top of a larger contract for 143 Eurofighter jets, which are made by a European consortium of Airbus (OTCPK:EADSY), BAE Systems (OTCPK:BAESY) and Leonardo (OTCPK:FINMF).

Facebook has become the target of at least three more U.S. state probes into the alleged mishandling of user data, Bloomberg reports. The inquires signal widening pressure on Facebook (FB) following a series of privacy scandals that were sparked by disclosures a year ago of political consulting firm Cambridge Analytica gaining access to data on tens of millions of users.