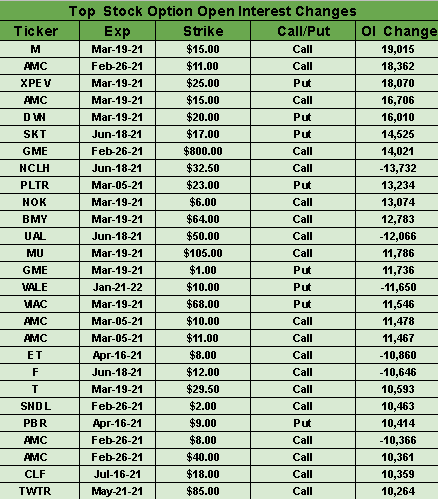 Wall Street looks to get its sea legs back at the open today after being whipsawed by interest rates. U.S. stock index futures are mixed, while Treasury yields are easing early following a spike yesterday that unnerved equity investors. S&P futures +0.2% are slightly higher and Nasdaq 100 futures +0.1% are slightly higher. The Nasdaq Composite had its worst performance in nearly four months yesterday. Asian markets followed the U.S. selling, with Tokyo's Nikkei tumbling nearly 4%. European markets are down, but the drop is tamer as yields have dipped. The 10-year Treasury yield is down 4 basis points to 1.47%. Yields on the 10-year raced higher in the previous session, topping 1.6% following a disappointing auction of 7-year Treasuries that prompted traders to push longer-term yields higher as the curve flattened. As much as $50B was unwound after the auction, according to Bloomberg. Overall, the bond market has been pricing in a hotter economy as vaccine programs progress and more stimulus is set to hit the U.S. economy. But Fed officials stressed yesterday they didn't see inflation as a problem and that a hotter economy might not even bring about corresponding inflationary pressures for a while. (3 comments)

Australia is lifting its ban on flights to and from the country using Boeing's (NYSE:BA) 737 MAX aircraft after nearly two years. It's the first country in the Asia-Pacific region to do so. And while Australia's airlines don't fly the plane, Fiji Airways and Singapore Airlines (OTCPK:SINGF, OTCPK:SINGY) do fly it into Australia and are looking to other regulators in order to resume using the craft. Also, a Boeing 777 on cargo service has made an emergency landing in Moscow due to engine issues - not quite a week after a similar Boeing craft shed engine debris over Colorado neighborhoods. (5 comments)

The proposed hike in the minimum wage to $15 an hour will have to be dropped from the Democrats' $1.9T COVID relief bill, a Senate parliamentarian rules. The White House now looks like it will pursue other avenues for the boost in wages. President Joe Biden is “disappointed in this outcome” but “urges Congress to move quickly to pass the American Rescue Plan,” a White House statement said. (4 comments)

GameStop (NYSE:GME) went through a wild day of trading yesterday, as much as 100% higher before seeing sharp selling in the last hour of trading to end up 18.5%. GME is up 10% premarket, but trading is naturally volatile. AMC (NYSE:AMC) is down 4% before the bell. Koss (NASDAQ:KOSS) is down 9% premarket. The second squeeze looks to be spurred by another round of huge buying in out-of-the-money, near-term call options. But it hasn't had the legs of the first round, with short positions greatly reduced. (5 comments)

AT&T spinning off DirecTV in multibillion-dollar deal with TPG

AT&T (NYSE:T) is spinning off DirecTV as part of a deal with private equity firm TPG Capital. The deal implies an enterprise value for the new DirecTV of $16.25B, and after the transaction, AT&T will own 70% of common equity and TPG will own 30%. AT&T expects to apply $8B from cash proceeds to reduce debt. Not moving over in the deal: any of HBO Max or AT&T's regional sports networks. (182 comments)

Beyond Meat (NASDAQ:BYND) announced a three-year global strategic agreement with McDonald's (NYSE:MCD). It will be McDonald’s preferred supplier for the patty in the McPlant burger. Beyond Meat also announced a global strategic partnership with Yum Brands (NYSE:YUM) to co-create items that can only be found at KFC, Pizza Hut and Taco Bell. (41 comments)