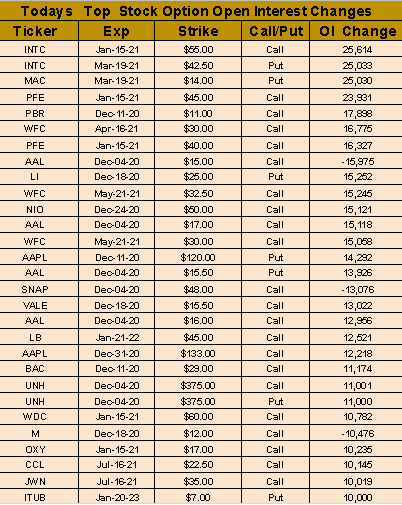 It's the first Friday of the month, and that means the release of the Labor Department's monthly employment report. Non-farm payrolls likely increased by 469,000 jobs in November after rising by 638,000 jobs in October, while the unemployment rate probably ticked down 0.1 percentage point to 6.8%. Those figures indicate that jobs growth is slowing for the fifth straight month since 4.8M jobs were added in June, though it also suggests the labor market is continuing to recover despite being in the middle of the worst wave of the pandemic. While some thought traders would be hesitant to place bets before the report, U.S. stock index futures are ahead by 0.4%, following other data on Thursday that showed fewer new U.S. jobless claims than forecast.

The pandemic-era decision by Warner Bros. (NYSE:T) to send all 17 of its 2021 movies to streaming on the same day as theatrical release is sending a shock throughout the movie industry - with theater stocks sliding on the news (but Warner parent AT&T surprisingly sanguine). Warner has painted the move as a one-year response to the coronavirus crisis, but with the exhibition industry struggling on tight liquidity even early in the pandemic, the question is whether a permanent change in consumer behavior is ahead: Once the theatrical release window is smashed, can it possibly be put back together in 2022? The story has unsurprisingly generated a number of "death of theaters" takes, but there's a school of thought that sees cinemas evolving into more of a boutique offering, not unlike how some bookstores have survived the Amazon (NASDAQ:AMZN) era - with fewer screens overall, more dining/drinks options a la the Alamo Drafthouse, and higher ticket prices along with entirely different margins.

Pfizer (NYSE:PFE) expects to ship only half of the 100M COVID-19 vaccine doses this year that it originally planned due to supply chain obstacles, a near-term problem considering its ultra-cold storage requirement of minus 70 degrees Celsius. Headwinds were due to a later-than-expected data readout from the pivotal trial and challenges scaling up the raw material supply chain. Pfizer shares fell as much as 3% on the news, but pared lossed soon after the company said it still expects to ship more than 1B doses in 2021. Meanwhile, Moderna (NASDAQ:MRNA) announced it will supply up to 125M vaccine doses globally in the first quarter, while a study of its vaccine candidate showed durable immunity.

It's official. After five days of difficult talks that exposed new rifts between OPEC+ members, delegates agreed to gradually ease supply cuts next year. 500K barrels a day of production will be added to the market next month, and the group also agreed to hold monthly meetings to decide on subsequent moves. In other energy news, S&P Global Platts has opened consultations on adding U.S. WTI Midland crude to its Dated Brent benchmark, a move that could transform the way oil prices are set in many parts of the world. It reflects the growing importance of American crude internationally - the U.S. restarted crude exports in 2015 - and the fact that supplies of some of the North Sea's key grades are running out.

Denmark, the largest producer of oil and gas in the EU, is putting an end to all oil and gas exploration and extraction in the North Sea by 2050, as well as canceling its latest licensing round. "We are now putting a final end to the fossil era," said Dan Jørgensen, Denmark's climate minister. The Nordic country agreed last year on one of the world's most ambitious climate targets of reducing emissions by 70% by 2030 and being climate neutral in 2050. Denmark currently has 55 oil and gas platforms, scattered across 20 oil and gas fields, and produced the equivalent of 103,000 barrels of oil and gas a day in 2019.

There's only four weeks left until the U.K. formally exits the EU on Dec. 31 and a trade deal isn't looking any more likely. British officials are accusing French President Emmanuel Macron of throwing a wrench into talks last night, saying he is making new Brexit demands at the eleventh hour. The big issues still on table are fishing rights and the "level playing field" of state aid, as well as what "effective remedies" each side could take if the other breaks an agreement. If the two sides fail to reach a deal, the Brexit divorce would end in a nightmare scenario for businesses and investors who say it would sow chaos through supply chains, borders and markets as the region grapples with the vast fallout from COVID-19.

Elsewhere in Europe, Hungary and Poland have been blocking the EU's seven-year budget and its post-crisis recovery fund, stopping nearly €2T from reaching member states, but the bloc may soon be moving on without them. At issue: Payouts from the budget would be suspended to a country if a weighted majority of nations determined a "rule of law" breach, like not adhering to democratic values like prosecuting high-level corruption. EU budget commissioner Johannes Hahn now says lawyers have found a way to get around Warsaw, Budapest and their objections by cutting them out of the recovery fund entirely and moving to a pared-back emergency budget for 2021. Scope for compromise? An EU leader summit scheduled for next week may still see a deal come to fruition, but the bloc has seen some shaky ground in the recent past.

Self-driving cars without human drivers as a back-up are now being tested in China's Shenzhen, according to Alibaba-backed (NYSE:BABA) AutoX, which said there were 25 vehicles operating in the city. "The next step is to increase the number of cars and the test area size, and to carry out tests in more cities. We have a plan in the next six months to expand to 10 cities globally," COO Jewel Li told CNBC's Squawk Box Asia. "It's close to a sci-fi kind of experience for most of our riders. When you really experience the vehicle fully driving itself, the level of excitement is overwhelming." While the company's driverless robotaxis are not open to the general public yet, employees and private guests, such as media, business partners, investors and automakers, can make trips in the vehicles.

In the latest escalation of U.S.-China tensions, the Pentagon added China's largest chipmaker SMIC (OTC:SMI) and national offshore oil and gas producer CNOOC (NYSE:CEO) to a blacklist of alleged Chinese military companies. While the nation has said that it does not engage in industrial espionage, U.S. officials have long claimed that local firms are beholden to the Chinese Communist Party and collect sensitive information on behalf of the People's Liberation Army. Semiconductor Manufacturing International Corp. is viewed as a major player in China's effort to boost its domestic chip industry, a drive that was accelerated by the U.S.-China trade war. Beijing may not take the steps lightly. The National People's Congress recently passed an Export Control Law that would counter any country that "abuses export-control measures" and poses a threat to national security and interests.

Who will pay $40B in COVID-19 debt owed to utility companies?