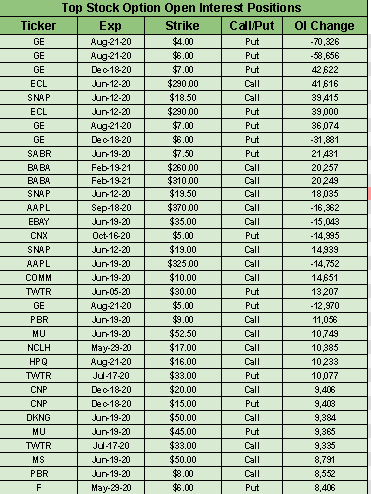 Global markets are jittery after China's parliament moved forward with national security legislation for Hong Kong and with President Trump holding a press conference later today on potential sanctions on Chinese officials. A revocation of Hong Kong's favored status is considered a worst-case outcome of the press conference for investors. Amid the geopolitical drama, Japan's Nikkei 225 fell back from a three-month high with a drop of 0.2% and Australia's ASX 200 declined 1.6%. Hong Kong's Hang Seng was off 0.7%, while the Shanghai Composite Index gained 0.2%. In Europe, stocks have started the day off in negative territory, with the Stoxx 600 Index posting a 1.1% drop at midday. U.S. stock futures are pointing lower. The yield on the benchmark 10-year Treasury note was down to 0.67% and the yield on the 30-year bond fell to 1.435% at last check.

NetEase (NASDAQ:NTES) confirmed it will seek a secondary listing in Hong Kong in a letter to shareholders. The U.S.-listed Chinese online gaming company made the decision amid increased scrutiny over Chinese firms. NetEase's secondary listing follows the successful decision by Alibaba (NYSE:BABA) to raise capital in Hong Kong and could give a needed boost to the financial hub. NetEase did not disclose the amount of capital it plans to raise.

The Tokyo Metropolitan Government is planning to ease business restrictions in the city to "step 2" of its reopening plan on June 1. The decision will allow shopping malls, gyms and movie theaters to reopen. The number of confirmed cases in Tokyo has been between 10 to 15 for the last three days, even as other parts of Japan are seeing a second wave of COVID-19 cases.

The highly watched American Society of Clinical Oncology meeting pivots to a virtual format for the first time ever this year. While as many as 40K medical professionals and scientists typically attend the meeting in person every year, this year's online event could draw even more interest. The conference's virtual scientific program kicks off today and will feature over 250 oral abstract presentations and 2,500 poster presentations in 24 disease-based and specialty tracks. Today's top abstract presentations include updates from Amgen (NASDAQ:AMGN), Merck (NYSE:MRK), Bristol-Myers Squibb (NYSE:BMY), Roche (OTCQX:RHHBY), Regeneron Pharmaceuticals (NASDAQ:REGN), Eli Lilly (NYSE:LLY), Gilead Sciences (NASDAQ:GILD), Pfizer (NYSE:PFE) and Seattle Genetics (NASDAQ:SGEN). The presentations all start at 8:00 A.M. ET.

Oil prices are lower after U.S. inventory data showed soft fuel demand, despite the hopes for a Memorial Day weekend rush of motorist activity. Still, there is optimism bubbling under the surface in the oil markets after strong gains in May followed the disastrous supply glut and limited storage turmoil in April. While ships full of crude are still anchored on the high seas with onshore storage sold out, the volume of crude stored on ships in Asia has come off the peaks seen earlier this month on a recovery in demand in China and India. A fresh report from the International Energy Agency projects global oil demand in May is set to decline ~25 mb/d compared to a year ago, with June demand clocking in at ~15 mb/d below last year's level. Looking ahead, OPEC+ talks on output are scheduled for the second week of June. In early action, WTI crude oil futures -2.8% to $32.73/bbl and Brent crude -2.9% to $34.28/bbl.

Economic reports will pour in today with updates on the trade gap, personal income, consumer spending, core inflation and consumer sentiment all due to drop. One of the more notable reports might be the consumer spending print, which is expected to show a 13.0% drop for April after spending fell off 7.5% in March. There could be a surprise with the tally, as estimates from economists range from -18.9% to -8.5%. That wide spread in guesses is due to the difficulty in modeling consumer behavior around a pandemic and stockpiling trend. Also on the calendar today, Federal Reserve Chairman Jerome Powell is due to give a talk with Princeton University Professor Alan Blinder. Of course, every time Powell talks these days, the focus is on whether he is softening his stance on negative interest rates.

Volkswagen (OTCPK:VWAGY) agreed to acquire a 50% stake in the parent company of Shanghai-listed Anhui Jianghuai Automobile for an undisclosed amount. The German automaker is also expected to increase its stake in its joint venture with Jianghuai Automobile to 75%. Jianghuai said the two companies plan to spend €1B ($1.11B) on raising the annual production of the joint venture to 350K-400K units by 2029 and introduce up to five additional electric car models by 2025.

President Trump signed an executive order targeting social media companies and the protections they have from liability for content posted on their platforms. The action follows complaints from the White House on the "unchecked power" of social media giants. Despite the uproar on both sides of the issue of cracking down on social media giants, Wall Street analysts expect very little actual action. "More bark than bite," says Height Capital Markets in a reaction that is similar to takes from JPMorgan and others. The FCC is seen taking a long time to enforce a policy, even if there is a way around the tricky issue of First Amendment rights. Still, the executive order turns an even brighter spotlight on Facebook (NASDAQ:FB), Google (GOOG, GOOGL), Twitter (NYSE:TWTR) and Snap (NYSE:SNAP).

Elon Musk has earned the first tranche of his mammoth performance-based payout from Tesla (NASDAQ:TSLA) for keeping the company's market cap at $100B or more on a 30-day and six-month moving average. Other conditions that had to be met were Tesla recording trailing revenue of $20B for four quarters or EBITDA of $1.5B. As part of the first tranche, Musk landed about 1.7M shares of Tesla through options with a strike price of $350.02, which works out to about $775M at yesterday's closing price of $805.81.